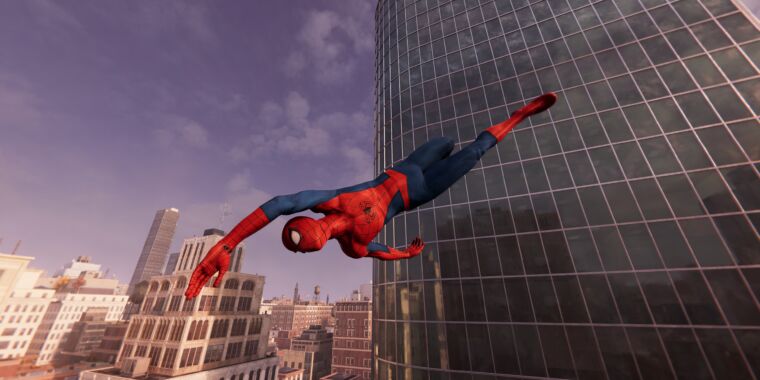 In two days, the 2018 hit game Marvel’s Spider-Man will break out of its console exclusivity and land on Windows (Steam, EGS) as arguably Sony’s biggest PC port yet. We knew Sony was bullish about selling more games on PC in the current fiscal year, but we didn’t expect a critically acclaimed gem like Spider-Man, which previously drove console sales as a PlayStation exclusive, to make the transition.

The thing about PC ports, of course, is that they have to work on a wide range of machines. As of press time, the Spider-Man version we tested doesn’t necessarily surpass the mix of stability and impressive technical performance that developer Insomniac delivered on dated PlayStation 4 architecture.

Such complaints might be moot when Spider-Man launches on Friday, August 12—and we sure hope so. At its best, this game does whatever a PC rig can, delivering ultra-wide ratios, super-charged graphical settings, higher frame rates, and increased ray tracing depth. But while it looks great on a super-charged PC and impresses on hardware as weak as a Steam Deck, it’s tough for me to comfortably recommend Spider-Man on midrange gaming rigs.

A good excuse to web-swing with your Deck

If you missed the hubbub in 2018, I strongly suggest you peruse my review of the game, back when its best hardware option was PlayStation 4 Pro. As I wrote then:

While the game would sometimes grow stale as it prodded me along with repetitive side quests and awful puzzle interruptions, I couldn’t help but swing, swing, swiiiing my way across virtual Manhattan again and again, always feeling like there was just enough fun to keep me hooked to my webs. Spider-Man is happy to confirm your superhero-gaming bias. If this adventure isn’t ultimately your cup of tea, it won’t be for a lack of effort, polish, and content on Insomniac’s part.

Four years later, I remain convinced that it’s one of the better open-world third-person action games. If you only skipped this game because you didn’t own a Sony console, you should consider setting aside roughly 20 hours for one of Insomniac’s best games.

That goes doubly for anyone who owns a Steam Deck. Behold: This game is the platform’s ultimate payoff. The game’s massive city and dynamic combat land on a portable system whose specs compare favorably to the original 2013 PlayStation 4, and the news is just as good as when we played this January’s PC port of God of War (2018) on the Deck. If anything, it’s even better, considering that GoW tempers its best graphical moments with many tight battling corridors; even Kratos’ biggest boss fights don’t compare to a full sweeping dive through virtual Manhattan.

While GoW can approach a mostly stable 40 fps on the Deck, aided by the system’s arbitrary refresh rate toggle, the same cannot currently be said for Spider-Man. Even at the newer port’s lowest graphical preset, the system can’t sustain a steady 40 fps on the Deck (though it does get close). You’ll have a smoother, more comfortable experience setting the Deck’s system-level frame rate cap to 30 fps, then nudging a few Spider-Man settings to “medium” while also leaning on AMD FSR 2.0, an upscaling system that renders a lower pixel resolution before drawing a final 1280×800-pixel frame buffer. (Unlike Nvidia’s similar DLSS system, AMD FSR 2.0 is not limited to one manufacturer’s GPUs.)

The porting team at Nixxes also offers Insomniac’s custom upscaling system as an option, and this resembles the “checkerboarding” process used on many PS4 Pro games. Both of these upscaling methods arrived too late into the review testing phase for me to conclusively determine which is better across a range of machines, but on the Steam Deck, the answer is clear. With FSR 2.0 enabled, I can get a nearly locked 30 fps refresh rate and increase crucial settings like level of detail and shadows from “low” to “medium,” while enjoying remarkably clear gameplay imagery. Insomniac’s method is less stable, less performant, and blurrier.

I love playing a cleverly engineered Nintendo Switch game on the go, but there’s really no beating the “wow” factor of an uncompromised open-world adventure like Spider-Man running on a comfortable, portable PC-like Steam Deck.