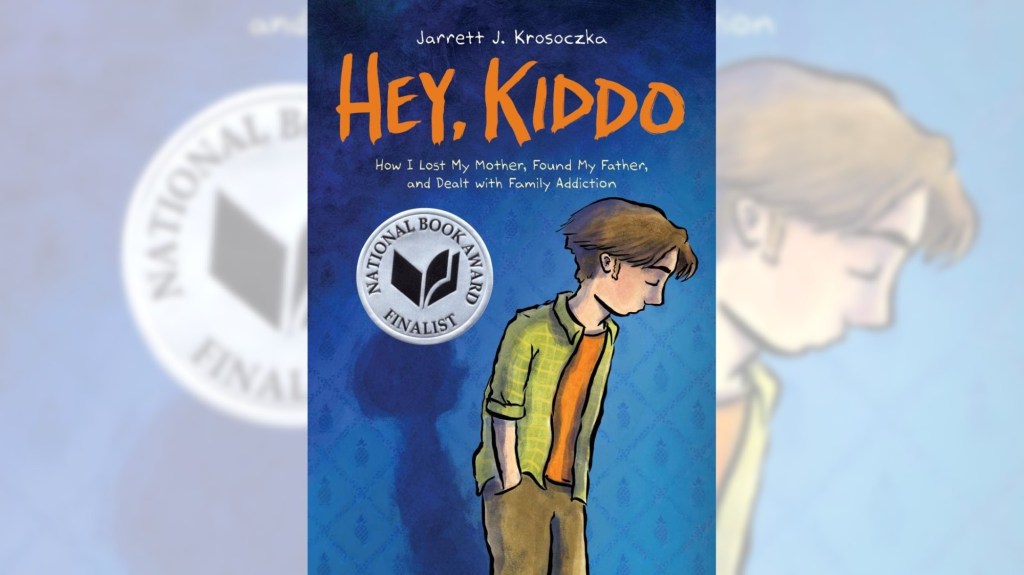 Teens, what has taken me so long to write to you about YA graphic novels? A question you surely must ask yourself daily. At long last the wait is over. Grab your cape, take my hand, and let’s not waste another second to plunge into the immersive world of YA graphic novels.

Of course, you must have guessed I’m joking about requiring a cape. The YA graphic novel genre transcends superhero comics — although those definitely have a permanent place on the bookshelf — and features all kinds of far-ranging topics, from flesh-eating ghouls to coming out. I probably don’t have to convince you, but graphic novels do what regular novels can’t … like little paper movies, they add layers of texture and depth to a story, nudging us to experience landscapes, characters, and emotions with an extra cinematic punch.

The library offers plenty of addictive YA manga series, like Sui Ishida’s “Tokyo Ghoul” (where you’ll find the flesh-eating ghouls mentioned above), Masahi Kishimoto’s “Naruto,” Kohei Horikoshi’s “My Hero Academia,” and Hajime Isayama’s “Attack on Titan,” to name a few, but today I want to write to you about some stand-alone YA graphic novels that really moved me.

While I was reading Jarrett Krosoczka’s autobiographical “Hey Kiddo,” I was annoyed any time life forced me to put it down. Chores? I shun them. Dinner? Eat without me. Late for work? How unfortunate (just kidding, if my boss is reading this). Krosoczka’s illustrations are sophisticated and detailed, but great illustrations alone wouldn’t hook me … it was the story.

Krosoczka’s growing up was pretty typical, that is if you don’t count the repeated trauma of dealing with his mom’s heroin addiction, his dad’s absence, and his grandparents’ unwavering weirdness. Krosoczka’s is a survival story, but not the stranded-on-a-desert-island kind. It’s also a love story, but don’t expect anything mushy gushy. Even though it sounds pretty heavy, it doesn’t feel that way — try it if you’re in the mood to experience a sensitive coming-of-age graphic novel that inexplicably leaves you hopeful.

Can I pull you in for a chat about Alice Oseman’s “Heartstopper” series? When British high schoolers Charlie and Nick meet in class, they’re not exactly each other’s type on paper. Charlie is a twiggy year 10 (a ninth grader by American standards) who just came out last year, and Nick is a sweet but seemingly very straight, very athletic, very hunky rugby player. But they do hit it off, and it’s not long before Charlie earns a spot on the rugby team (he’s small but speedy), and Nick finds himself fancying Charlie more and more — and questioning things he thought he knew about himself. The cute British banter will entice you, the irresistible characters and cliffhanger ending will leave you wanting more (which you can get from “Heartstopper” Volumes 2, 3, and 4 — and a recently released Netflix series).

In Mike Curato’s “Flamer,” it’s summertime and Aiden is obsessing about starting his freshman year in high school after a pretty miserable middle school experience (very relatable). Oh, and he’s also at Boy Scout Camp, assigned to the Flaming Arrow patrol. And he’s also smack dab in the middle of an identity crisis, struggling to figure out how the bi-racial (Filipino and White), overweight, outdoorsy, Catholic, and queer parts of himself can coexist. Friendship, a crush, bullying, confusion, rage, and shame come to a boiling point for Aiden. Read the book to find out if he’ll be able to muster the self-acceptance required to prevent everything from going up in flames.

One more! I can’t stop! If you’ve ever lost someone close to you and then been swallowed by the resulting heartache, consider reading “Dancing at the Pity Party: A Dead Mom Graphic Memoir” by Tyler Feder. As the title suggests, the book recounts Tyler’s own experiences after her amazing, creative, loveable, outgoing, mom dies — from well-doers’ clumsy attempts at condolence, to moments of absolute despair. Believe it or not, some parts are really funny, but those parts are balanced out by parts that are devastating, vulnerable, and honest, pretty much just like grief itself. This book would also make a great guide if you are trying to support a friend who’s grieving.

We made it. Now feel free to take your cape to the dry cleaners and find your way to the Teen Underground at A.K. Smiley Public Library, where all of these graphic novels and more await an intrepid and compassionate reader, just like you.