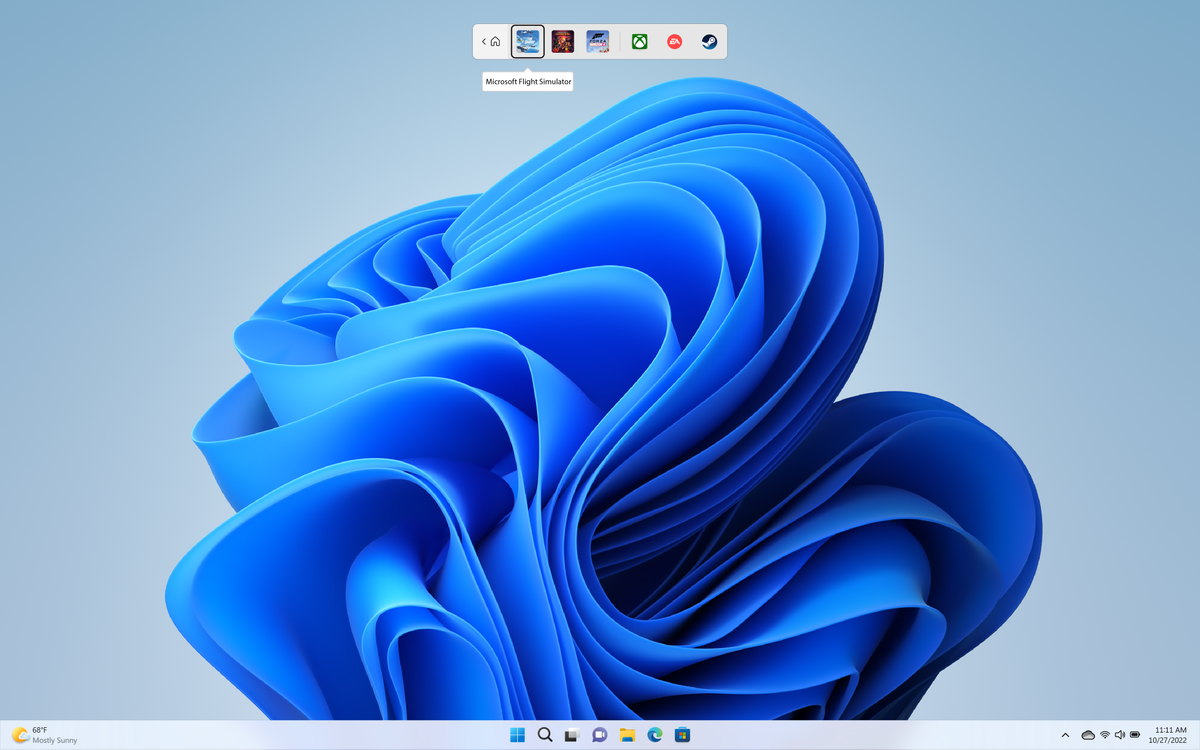 The new Windows 11 update is rolling out from today, and if you’re a PC gamer with a penchant for windowed gaming or using a controller there are some upgrades in this version you’ll want to check out.

The headline feature for gamers in this update is something called Controller Bar. Essentially it’s a popup bar that works in conjunction with Windows 11’s integrated Xbox functionality to deliver a list of your most recently played games and launchers—all accessible via a few button presses on any controller you may have plugged into your machine. If you have an Xbox controller plugged in, you need only hit the Xbox button to bring it up.

Think of it as one way to make your PC a little more controller friendly, even if ultimately the controller experience on PC isn’t all that great. At the very least, the new Controller Bar should allow you to boot your PC and load into the controller-friendly Steam Big Picture mode without relying on a mouse or keyboard at any point—a win for living room PC setups away from the desktop.

That’s not all Microsoft has packed into the new release build. There are also improvements to the windowed gaming experience for older games; those running in the DX10 and DX11 APIs. These are set to “receive dramatically improved display latency, Auto HDR, and variable refresh rate (VRR)” while in windowed mode on the new OS version, which were previously features only available if you went fullscreen. That should come in handy if you want to dual-wield a DX11 game and, say, Discord or OBS, and switch between them with ease.

These features are already offered out freely to DX12 games but you can expect some improvements to these newer games. One such improvement is that AutoHDR—Microsoft’s algorithm for turning SDR games into HDR games—is going to be more widely available.

DirectStorage also receives expanded support across more storage configurations, including RAID 0, which gives us some inkling of its eventual hardware support when it arrives. That tech was initially set to be released sometime soon with Forspoken. However, that game was unfortunately delayed until next year (opens in new tab) and seemingly pushed DirectStorage’s launch back with it.

That about wraps up the gaming-specific upgrades headed to Windows 11 with the new 2H 2022 update, but there are other improvements previously announced now making it to the OS. These include: more natural sounding narrator voices, improved focus features, system-wide live captions, Smart App Control, and new driver and memory security enhancements.

Further to these, Microsoft is also going to start rolling out smaller updates as and when they’re ready to go. We can expect the first batch in October (opens in new tab). These will include some of the more must-have features for the OS this year, such as File Explorer tabs, an update to the Photos app, suggested actions for Copy, taskbar overflow, and more sharing options for devices.

And if none of that takes your fancy, well, I don’t blame you. It’s not the single most exciting upgrade to an OS, but that’s how Microsoft is crafting Windows 11—bit by bit. Since its release nearly one year ago, Windows 11 has become a better OS, though still feels like not quite the overhauled OS we’d love it to be.

Still, if you’re keen to try these new features out immediately, you can. Just head to the Windows Update settings on your PC and hit “Check for updates.” If you don’t have Windows 11 yet, you’ll first need to run your machine past the Microsoft system requirements to see if your PC is a good fit, but otherwise should be able to follow the same process.

Though it may not be an altogether terrible decision to wait just a little longer before hitting update: Microsoft OS updates aren’t always the smoothest.