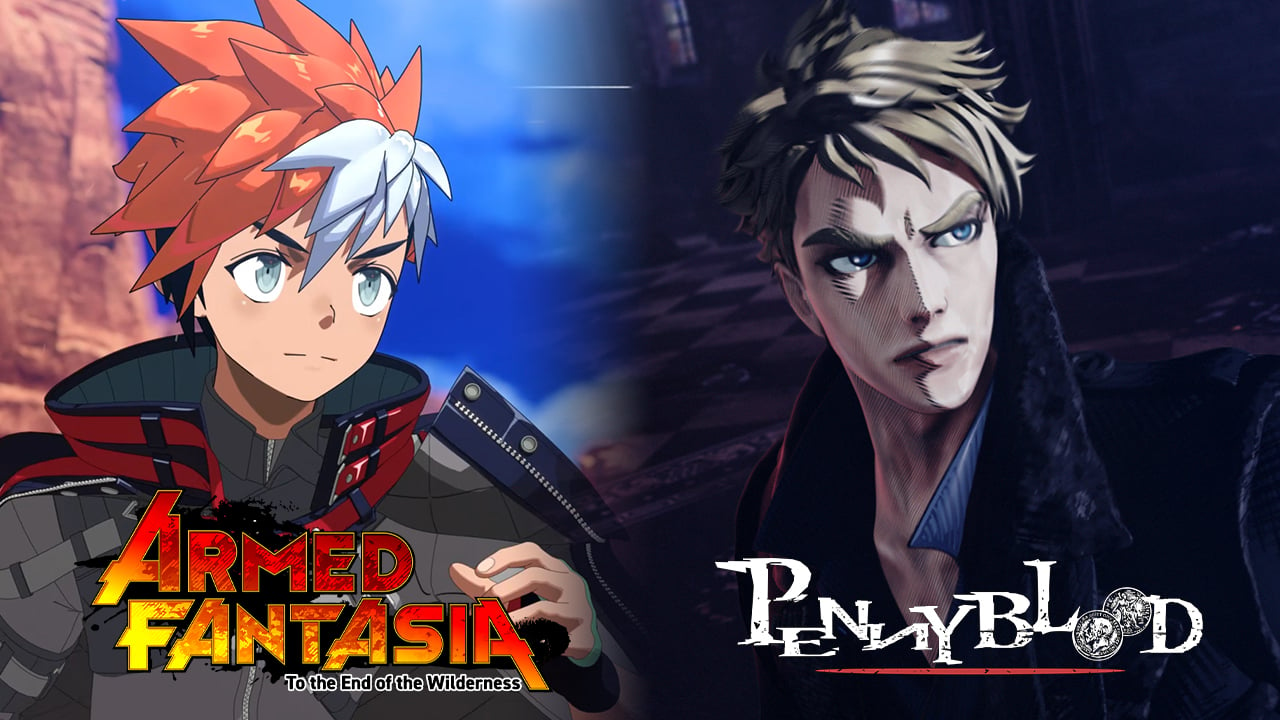 Penny Blood presents a world twisted in gothic horror and nightmarish imagery rarely seen in Japanese RPGs. In Penny Blood, players follow the story of Matthew, an investigator who embarks on a dark international probe through the iconic Roaring Twenties, amassing allies and confronting trauma in a world twisted by cosmic horror, malice and mayhem.

Players will circumnavigate the globe, from the USA to Europe and Asia, and explore nations either recovering or basking in the wake of one of history’s bloodiest conflicts, oblivious to the turmoil that brews beneath the surface.

Penny Blood’s story begins with Matthew Farrell, a lone wolf private detective in New York working for the Bureau of Investigation. Despite hating the accursed powers he inherited from his father, he utilizes his fusion transformation abilities to hunt down monsters at the behest of the Bureau.

One day, Matthew is tasked with investigating a strange incident that occurred at a mental asylum in New York. After rushing to the asylum, he finds it teeming with grotesque, rampaging creatures. Utilizing his hidden power, Matthew manages to achieve a narrow victory.

In order to unearth the truth behind the bizarre incident, Matthew’s investigation will take him from America to the distant continent of Asia, including Japan and China, as well as to the far corners of Europe. Along the way, he will encounter those who fight for vengeance, those who seek to utilize the aberrant horrors for their own gain, and those who simply wish to destroy. Penny Blood tells the tale of a man who must become that which he seeks to vanquish.

Penny Blood’s overworld maps give a bird’s-eye view of cityscapes and towns that will teleport players to the 1920s, where they will experience the world as it was, unaware of the gruesome events soon to unfold.

From busy streets to haunting sanitariums, players will delve into carefully detailed field maps as they purchase items paramount to their quest, investigate supernatural happenings, and battle stygian monstrosities.

The easy to learn, difficult to master Psycho Sigil battle system combines traditional turn-based Japanese RPG strategy with twitch-trigger reaction time in order to maximize the potential of attacks, keeping players on their toes with every encounter. Players can embrace the darkness within by using Fusion to call upon the abyss and fight fire with fire, harnessing the power of the darkness to hurl demons back from whence they came.

Interactions with the demonic will affect the heroes’ Sanity Points. If players lose too many Sanity Points, their allies will succumb to madness, gaining strength and losing composure. However, that boost in power might be just what is needed to turn the tide in battle.

Returning to the helm as composer is Hirota Yoshitaka (of Shadows Hearts and Shadow Hearts: Covenant fame) to inject a sense of dread and eerie unease befitting of the atmosphere. And accompanying him is Akari Kaida of Breath of Fire 3, infusing a heavy dose of jazz into the Roaring Twenties setting.

“This is my second chance. Chances to make another game like this are rare, so please give me your support,” says lead game designer Matsuzo Machida.

With direction from Matsuzo Machida, character design by Miyako Kato and music and sound composed by Yoshitaka Hirota and Akari Kaida, Penny Blood promises to sink its claws into players as it revives the darker side of Japanese RPGs.

The Unsettling Landscape of North Tarrytown

Located 30 miles north of New York, positioned right on the eastern bank of the Hudson River. Some call this small village Sleepy Hollow due to a legend about a headless knight that roams the area.

In order to solve the mystery of the monster that appeared in Golgotha Asylum, Matthew visits Tarrytown to speak with Oswald Craig, the local innkeeper. But what awaits Matthew within Tarrytown’s eerily thick fog…?

The Imperial Capital of Tokyo – Asakusa Rokku and Ryounkaku (1923)

After achieving victory in both the Russo-Japanese War and World War I, Japan basked in glory as one of the Far East’s most formidable empires. This affluence also led Tokyo to build the Ryounkaku tower in Asakusa—the tallest structure in all of Asia, which Tokyo natives called the “Asakusa Twelve-Story.”

After an assault happens in Asakusa involving the American ambassador to Japan, Matthew rushes to Tokyo and catches a glimpse of a threat that aims to plunge the entire world into darkness.

An Irish-American born in 1895. Now 28, he lives in New York and works as a private detective. After serving in the great war, he returned to the US and traveled to various states to investigate a series of eerie incidents. One day, William J. Burns, the director of the Bureau of Investigation, tasks him with a top secret mission that takes him to Japan.

Normally, Matthew uses a sawed-off shotgun and martial arts to subdue his foes—but when in peril, he can transform into a fusion monster, allowing him to eviscerate his enemies in a variety of ways. Those who know this secret call him the knightwretch, but he doesn’t care.

As Matthew searches for Emilia, he’s gradually drawn deeper and deeper into a war against creatures from another plane.

An element-less fusion monster, and a symbol of the loneliness and emptiness that lurks deep within Matthew’s heart.

Well-balanced in terms of attack and defense, Demna can prove useful in all manner of situations. Both its sword and shield are inscribed in ancient Goidelic. The sword’s text reads “The power to bestow endless slumber on the sinful,” while the shield reads “The power to accept any manner of hardship.”

Demna is the first fusion monster that Matthew transformed into after inheriting the ability from this father, and still hides further potential…

Born in London in 1898. Now 25, Emilia currently serves as a member of the UK Secret Service. After being lauded for her fierce passion and incredible skills, she was promoted to a special agent who specializes in foreign affairs.

In her last mission, she was made a bodyguard for Mr. Tubbs, the American ambassador to Japan. Shortly after, Mr. Tubbs died in an incident within the Tokyo district of Asakusa, while Emilia went missing.

One of her eyes and three of her limbs have been replaced with robotic implements, granting her superhuman abilities capable of mowing down all manner of monsters.

Born in Tokyo in 1906. Now 17, Suseri serves as an advisor priestess to Kamuzumi, the Japanese empire’s monster extermination force.

As her mother came from a family of spiritualists gifted in kidō magic arts, Suseri has the ability to sense otherworldy creatures as soon as they appear. She was to be the eyes of the Shinteigumi, Kamuzumi’s front line brigade, but she never hesitates to dispatch the monsters herself when the need arises, utilizing the great reserves of spiritual power that swirl within her.

After Matthew and Emilia save her in the imperial capital, she joins their cause in order to repay them. Suseri’s weapons of choice are her seimakyo magic mirrors.

The name given to the horrifying grotesquerie discovered within Golgotha Asylum.

The Motofuji discharged copious amounts of malice, a type of energy born from negative human emotions. This malice is allegedly the culprit behind the asylum patients’ monstrous transformations. The negative miasma that seeped out from every pore of the hideous Motofujis invaded the patients’ bodies and minds, awakening despicable desires within them.

After Matthew rushed into the asylum, he engaged in a furious battle with the creature and managed to destroy it… But it’s still anyone’s guess as to why the monster appeared there in the first place.

The malice released from the Motofuji has caused some patients of Golgotha Asylum to undergo monstrous transformations.

Long devoid of all intelligence and emotion, these zombies now have only one goal in mind: to devour as much living flesh and vital energy as they can get their rotting hands on. Spurned by the instinct to drown their bodies in malice, these patients shocked the NYPD with a brutal, bloody onslaught.

A manifestation of darkness that has taken roost within Matthew’s psyche. Unbeknownst to Matthew, Atam is the Lord of Death who commands the Seven Deadly Sins: demons that represent the sins of lust, gluttony, greed, sloth, wrath, envy, and pride.

Originally an inhabitant of the ‘other side’, or the root of the Tree of Life, as some call it, Atam has found sustenance on ‘our side’ through hiding itself within the souls of humans who possess divine blood. And so, after many long years of feeding off these souls, Atam gained a wealth of knowledge that steadily transformed it into something more akin to an omnipotent god.

Several years ago, Atam failed in its attempt to curse and murder its previous host and was instead beaten within inches of its own life. Now, Atam lies dormant within a new host, focused on nothing but regaining its power until it can one day be reborn anew.