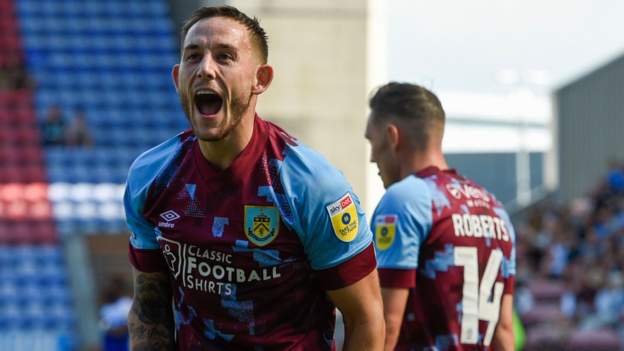 Jay Rodriguez and Josh Brownhill put them two up in the first half before a Will Keane penalty halved the deficit.

But a Nathan Tella strike and late goals from Brownhill and substitute Samuel Bastien wrapped up a convincing away win for Vincent Kompany’s team.

Victory moves the Clarets up to sixth while the heavy defeat ended Wigan’s unbeaten start to the season and saw them fall to 20th.

Backed by a large away following, Burnley were quick out of the traps and were two goals up inside the opening half-hour.

Rodriguez lashed home after Vitinho’s cross caused problems in the Wigan defence, before the Brazilian also set up the second for Brownhill who arrived to meet his cross from the left.

Keane made it 2-1 before the interval, scoring from the spot after Callum Lang had been brought down by goalkeeper Arijanet Muric.

Burnley had lost a two-goal lead last Saturday in a 3-3 draw with Blackpool and Lang was denied an equaliser by Muric just before the break.

But they did not make the same mistake again and Kompany’s men were ruthless in the second period.

Tella made it three goals in two games as he raced on to Brownhill’s pass to make it three.

Then Brownhill went from creator to scorer for the second time in the afternoon as he cut inside and fired past Jamie Jones.

There was still time for Bastien to grab his first Championship goal after scoring in the EFL Cup in midweek, as Burnley hit five in the league for the first time since a 5-0 win at MK Dons in January 2016.

“The scoreline is tough. We didn’t start the game particularly well and we weren’t ourselves for long enough in the game.

“We missed a good chance to make it 2-2 and then they went up the other end and scored an offside goal, which hurt us.

“We thought we would have a go at 3-1 as sometimes that pays off but the quality of player coming off the bench for Burnley was there for all to see.”

“Everyone will talk about the passes, the possession and the goals, but I see a team that keeps working hard and keeps battling it out and gets around the ball.

“The rest is what they can do and were brought here to do.”