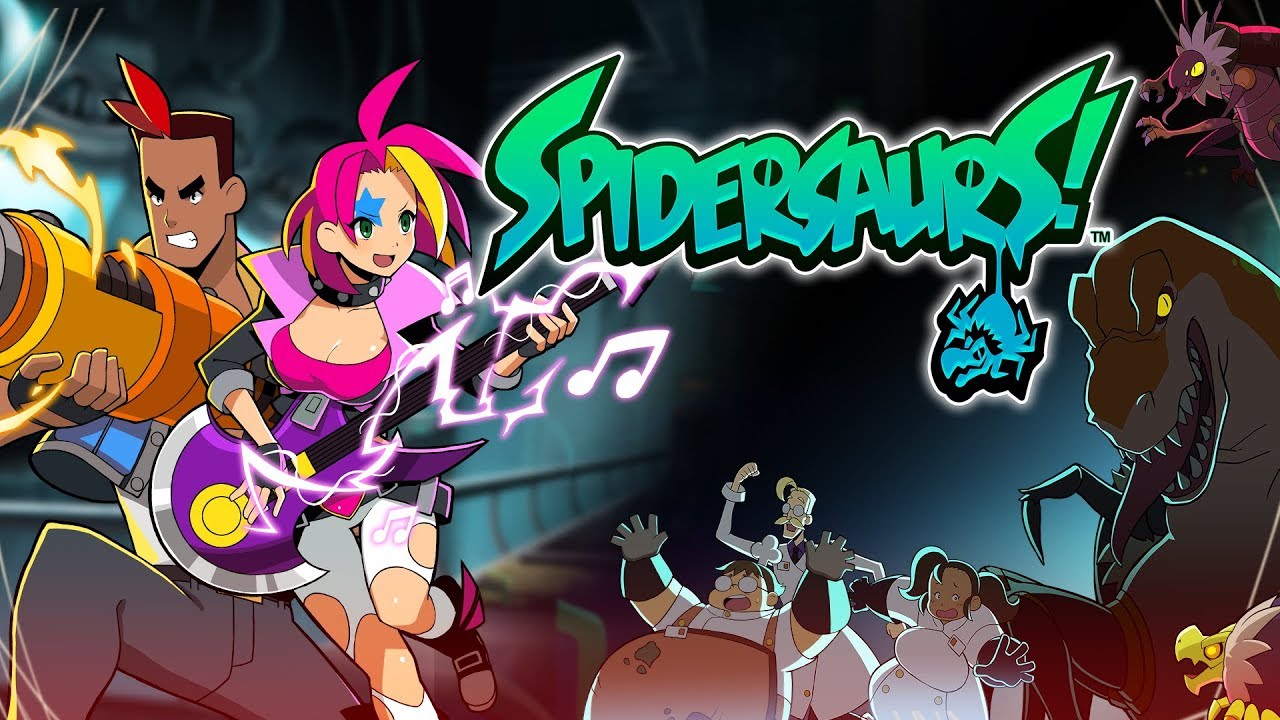 At this point, it feels safe to say that Wayforward are one of my favorite developers. Between their flagship Shantae series, River City Girls, Mighty Switch Force!, older titles like LIT, and even their licensed projects such as The Mummy: Demastered, they’ve built up a rather impressive pedigree of quality games over the years. It’s the sort of thing that earns a developer faith in their future titles and a surprising degree of leeway when actually judging the reality of those titles. With that in mind, let’s talk about Spidersaurs.

The Basics:  Spidersaurs is a run-and-gun platformer where the enemies are genetically modified abominations fusing together spiders and dinosaurs. Players inhabit the role of a pair of unpaid interns named Victoria and Adrian at Ingest, the company responsible for creating the spidersaurs as a solution to food shortages who then, predictably enough, lost control of their creations. As a result Victoria and Adrian are tasked with containing the creatures while keeping the incident out of the eyes of both the public and the authorities.

There isn’t much story beyond that, with what little there is being communicated through fairly short scenes between levels, but even so it’s characterized by that trademark Wayforward charm – it doesn’t take itself super seriously and it’s fun to watch the characters banter. For that matter, every aspect of Spidersaurs is absolutely dripping with charm. From the character and enemy designs to the whimsy of the protagonist’s improvised weapons (an electric guitar and a sportsball launcher) and the music, the game has an effusive personality that it’s hard not to smile at.

It’s a shame, then, that the gameplay is just okay. I don’t play a whole lot of run-and-guns, but even I was able to tell that it doesn’t do anything particular special with the genre. Players have two slots for weapons/firing modes that they can switch between at any time and swap between six modes (including a shield) by grabbing pickups. Picking up the same one more than once upgrades them, but taking damage downgrades the currently equipped weapon. The player loses their equipped weapon on death, replacing it with the basic peashooter they start with, which makes it very easy for just a couple of slip-ups to snowball into a game over, especially if you happen to get stuck with the basic weapon in the middle of a boss fight. The game does come with three difficulty settings, and while easy mitigates this mechanic by allowing you to keep level 2 weapons after taking damage, it also locks you out of the game’s final level.

At the very least, all of the weapons are fun and creative, especially given how each character has their own different version of them, bringing the actual total up to twelve. The characters also gain a few additional abilities over the course of the campaign, such as wall climbing, double jumping, and ground pounding, which do make things a bit easier as time goes on. I never got the chance to play co-op, but I imagine it’s delightful chaos. I would certainly hope it is, at least, because otherwise this game’s replay value and general lasting appeal are quite low. The game only consists of seven fairly short levels without even any collectibles or anything, and the only extra game modes after beating the story are essentially the exact same as the campaign but with story scenes removed. All told, the length is somewhat underwhelming, no matter how delightful it is while it lasts.

It says quite a bit that I wish there was more Spidersaurs than there actually is. The game displays Wayforward’s typical level of polish and manages to be quite fun while it lasts, despite whatever frustrations may arise from its difficulty, but there’s just not much there. I definitely can’t recommend this one at full price, but if it goes on sale and you have a friend to run through it with then it’s an absolute blast.

Spidersaurs is proof that good things can come in small packages, but sometimes a small package is still a downside after all.