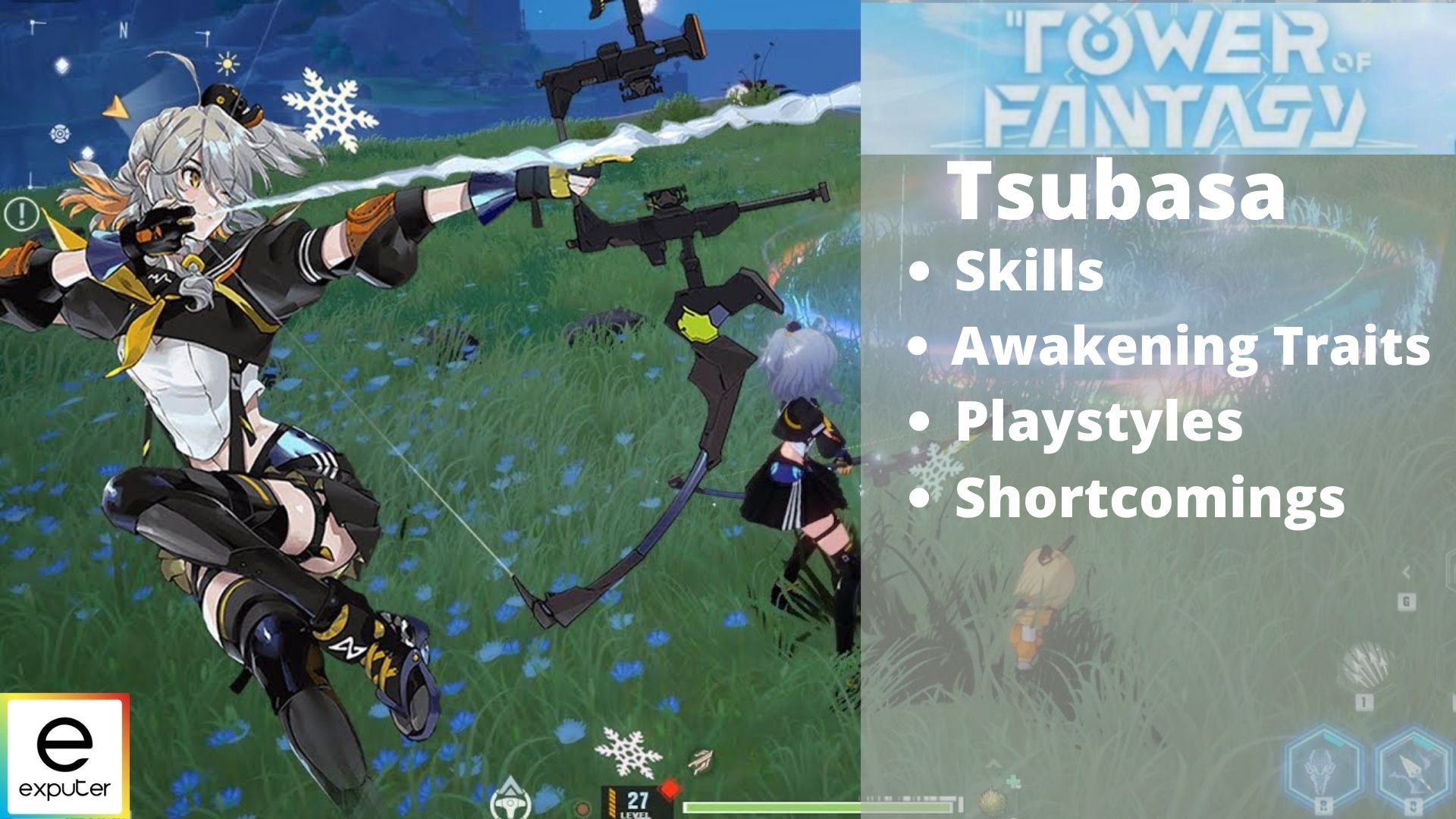 Genshin impact finally has a competitor, Tower Of Fantasy a shared open-world MMORPG that is rivaling Genshin as no other game has before. The reason for that? It’s a post-apocalyptic story of rescue and destruction, and freedom in world exploration, and its art style and characters act as a seasoning on top of all of that. Tsubasa in Tower Of Fantasy is also one of these best characters. Also, read our Tower of Fantasy Vs Genshin Impact guide to learn more about it.

She is easily among those characters who have the most potential for growth in Tower Of Fantasy. Why wouldn’t she? She is a proficiently skilled combatant, has a wide variety of skills, possesses an overpowered weapon, has a deadly moveset and she hits like a truck.

Long story short Tsubasa can definitely be the most overpowered character in the Tower Of Fantasy end game. Provided you level her up correctly and can control her efficiently since as amazing as Tsubasa is, there is one shortcoming about her.

It’s that she is not ideal for mobile phone players but is a must for those on the Pc port of the game. Speaking of Pc, here’s our Tower of Fantasy Crashing PC guide in case you’re having an issue.

Before continuing, give our Tower Of Fantasy Best SSR Characters guide a shot.

Tsubasa’s Playstyle In Tower Of Fantasy

When it comes to Tsuabasa’s playstyle, it is heavily reliant on ranged attacks. Her main weapon is a bow also foreshadows this. Her main strength is that she can attack multiple small enemies at once making her the perfect candidate for dealing with rushes. As for her usefulness against larger and stronger enemies, well she cannot one-shot them but she can freeze them in their place for 2 seconds.

With her playstyle out of the way, let’s cover Tsubasa’s skills in Tower Of Fantasy. You also might be interested in our Tower of Fantasy Weapon Tier List guide.

Tsubasa’s Skills In Tower Of Fantasy

Like we said before, Tsubasa’s colorful variety of skills is what makes her such an exceptional character in Tower Of Fantasy. So the following section of our guide will be expanding on all the skills in her arsenal. Before continuing read our Top 30 Tower Of Fantasy Tips & Tricks guide.

This is the skill that we just talked about above. Upon activation, it freezes the target for 2 seconds, after the ice breaks it causes damaging frostbite for 6 seconds. Ice Shell is a great skill that is best suited for crowd control or for times when your enemy’s weapon charge is being a pain in the butt. Since while frostbitten, the charge rate of your target’s weapon is reduced by a whopping 50 %.

Another mentionable effect of the ice shell is that when the ice breaks, the target takes an additional 151 % damage of your base attack power. All of the previously stated facts are the reason why Tsubasa becomes every player’s favorite the moment they get their hands on her in Tower Of Fantasy. Although it is obvious, in order to use the Ice Shell you need to have your weapon fully charged.

The Charged Arrow is another overpowered skill that Tsubasa possesses. As the name implies, this is a charged attack. Now the fun part is, that you can deal an astonishing 187.8 % damage of your ATK + 5 when the attack is charged to the max. let us explain, you can charge Charged Arrow for 3 seconds max, now the damage output, when you are charging it during the first second, is 87.8 % of ATK + 5.

That number goes up by 50% for every additional second you hold the attack. Counting that up to 3 seconds and doing the math, it comes out at a grand total of 187.8 %. On top of that, the damage output is doubled when you land a headshot or hit an enemy’s weak spot. Keep one thing in mind though, you can’t land headshots on Wanderers.

Lastly, you can activate Charged Arrow by holding down the normal attack button. While you are here, why not read our Tower Of Fantasy Review for a better understanding of the game?

Now the Arrow Rain is an AOE attack and considering its damage output it can seriously help in crowd control. You can activate it by holding down the normal attack button after any normal attack.

As for its effect, it summons a volley of arrows which gives a damage output of a whopping 287.2 % of your ATK +15. Needless to say, Arrow Rain is your best bet to get out of a tight spot.

The Piercing Shot allows you to do a backflip and fire 3 deadly arrows one after the other. The first arrow deals damage of 258.3 % of your ATK + 14, and the follow-up arrows deal 60 % of that damage. The attack can also knock targets back if all the arrows land successfully.

On top of that, Piercing Shot can also stun your enemies provided they hit an object when being knocked back. The Piercing Shot’s short cooldown period of only 12 seconds is another factor that makes this Tsubasa one of the best cards in Tower Of Fantasy.

On a side note, if you want to know more about the in-game characters, we have an amazing Tower of Fantasy Tier List for you.

The Explosive Barrage is Tsubasa’s ultimate attack in Tower OF Fantasy since it is literally the complete package. When activated, it removes all debuffs inflicted previously upon you along with the summoning of a hailstorm which has a damage output of an astonishing 570 % of ATK + 30. And if this does not make Tower Of Fantasy a piece of cake, we don’t know what will.

But that is not all, the storm also has a 10 % chance to freeze your enemies for 2 seconds. It also gives you a cold front as well as a 45 % increase in your speed for 7 seconds. You can use an Explosive barrage once your weapon is fully charged.

The Loaded Arrow is the less lethal version of the Piercing Shot. Where Piercing Shot shoots three arrows one after the other, the Loaded Arrow shoots one arrow which deals 124 % of ATK +7. In order to activate it, you need to dodge an attack and then press the attack button.

Considering its dodge and attack mechanism, it can be a great option for counterattacking. Lastly, it also knocks back your target.

As the name “Air Volley” suggests this is an aerial attack or jump attack in other words. For its high damage output, it is really simple to activate. All you need to do is press a normal attack while you are in the air. The result will be four attacks.

The Quickdraw is Tsubasa’s last but certainly not least skill in Tower Of Fantasy. It allows you to quickly shoot five arrows one after the other. To some players, it seems like a reference to Genehiro Ashina from Sekoro. Anyways, to activate it, spam the attack button while you are on the ground. The damage output of each arrow is as follows:

Sheesh! Well, that wraps up Tsubasa’s skills in Tower Of Fantasy, now let’s take a look at her other aspects. Also, give our Tower of Fantasy Reroll Guide a shot.

The Awaken Traits system in Tower OF Fantasy is similar to advancement but this is only exclusive to Simulacra. Using Awakening abilities requires Awakening Points and the best way to get them is by sending gifts to other Simulacra. That said let us take a look at Tsubasa’s awakening traits in Tower Of Fantasy.

The Rainstorm uses 1200 Awakening points. Its effect is that every time Tsubasa successfully lands an attack, she gains 1 stack of Fierce Strike per second. Every stack increases your ATK by 0.5 % which does not seem like much at first but adds up pretty well once you are over 10 stacks. The maximum number of stacks you can get is 15. The whole effect lasts for about 30 seconds.

The Raging Waves is just a stronger version of Rainstorm and costs 4000 Awakening Points. Similar to the Rainstorm every time Tsubasa deals damage she gets 1 stack of Fierce Strike. But the difference here is that every stack increases the ATK by 0.6 % instead of 0.5 %. The total number of stacks is also increased up to 30 here. As for the duration, this one also lasts for 30 seconds.

Tsubasa’s Shortcoming In Tower OF Fantasy

Now although Tsubasa is a great character in Tower Of Fantasy, she has just one shortcoming. It’s that she can’t break shields, at all. But thankfully this can be remedied by using a backup weapon with a good Shatter stat and consequently is great at breaking shields. Your best options here are Thunderous Halberd, Scythe of the Crow, Rosy Edge, Pummeler, and Terminator.

That about wraps it up., if you have made it to the end then you should know everything you needed to about Tsubasa in Tower Of Fantasy by now. If you found this helpful then you will also be interested in our Tower of Fantasy Wanderer Creation Limit Reached guide.