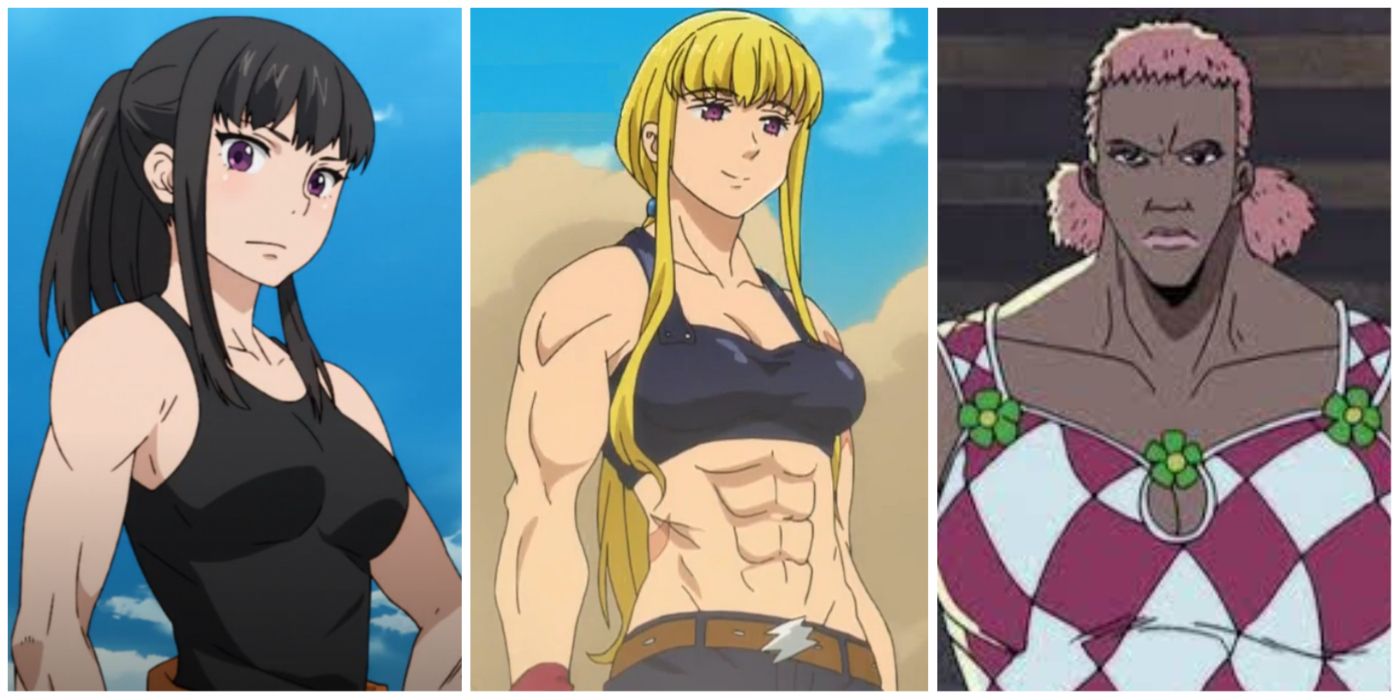 Many anime controversially portray women as thin and slender, especially characters that are essential to the main plot. Even female fighters usually rely on light footed tactics or magic in order to stay relevant in their respective stories. However, a number of anime women prefer a much more direct approach.

They break stereotypes and expectations alike through their impressive musculature, outstanding physiques, and Herculean strength. By identifying these well toned women and their backstories, it becomes easier to understand their uncannily prodigious strength and the many imaginative ways that they have made an impact on the world around them.

10 Tsunade Was The Strongest Kunoichi Ever (Naruto)

Tsunade was a powerhouse in Naruto. By masterfully controlling her chakra and using it to enhance her physical strength, she could overwhelm characters as powerful as the Raikage and even Orochimaru. During the Forth Shinobi War, Tsunade proved strong enough to crack a susanoo with her bare hands.

She was one of the few characters to accomplish such a feat, even if her stature is not as formidable as her strength might suggest. Regardless, Tsunade’s medical ninjutsu makes her a balanced and unstoppable fighter.

9 Charlotte Smoothie Towered Over Others (One Piece)

Charlotte Smoothie was the only one of Big Mom’s Sweet Generals not to be defeated in battle. As a result, she has a relatively exclusive title among One Piece‘s most diabolical rogues. Towering well over enemies and peers alike, Smoothie’s height allows her to be distinguished easily.

Her Devil Fruit also plays into her Amazonian stature since she can take opponents in her arms and squeeze out their life force. Surprisingly, the fluid she is able to produce from their desiccated husks is both tasty and nutritious.

Legend Of Korra’s titular protagonist was much different from her predecessor. Instead of exclusively relying on bending and conflict aversion, Korra relished physical strength, and her muscles were frequently a point of commentary by those who knew her.

She proved so athletic that she dominated pro-bending tournaments and even bare-knuckle arena fights. Nonetheless, Korra’s greatest assets are still her fantastic bending abilities and deep spiritual awareness. Her athleticism is simply a bonus that allows her to thrive as a versatile fighter under a wide number of circumstances.

7 Mirko’s Quirk Made Her Stronger (My Hero Academia)

After All Might’s retirement, Mirko was one of the top pros in My Hero Academia. She first debuted alongside Endeavor when he was announced as the next Symbol of Peace. A natural athlete, her already impressive skills were further enhanced by her “Rabbit” Quirk.

In addition to increasing her overall ruggedness and tenacity, it afforded her tremendous power in her legs. This made her a highly mobile and adaptable melee fighter, as well as a hero excellent for rescue missions. Mirko may be fairly haughty, though given the potential of her Quirk and already illustrious reputation, she has earned the right to brag.

6 Zorin Was A Sinister Nazi Under The Millennium Organization (Hellsing)

Zorin was a vile Nazi in service to the Major. In addition to her noticeable strength and deadly scythe, Zorin’s illusionary prowess rendered her one of the most lethal monsters in the Hellsing universe. Despite the trained mercenaries Victoria surrounded herself with, it began to seem as if she wouldn’t hold out.

In a final bid to preserve herself, she unleashed her dark nature, overwhelming Zorin and the remaining hordes with a combination of force and dark magic. In the end, Zorin was far more reliant on her illusions than her statuesque might.

Maki was perhaps the most physically muscular woman in Fire Force. Her Ignition Ability allowed her to animate two sentient flames that assisted her against her enemies. They came in handy since they were reliable and had relatively high offensive force.

However, Maki’s family has often been critical of her presence in Company Eight due to the high threat it portends. Nonetheless, Maki has explicitly stated that she wishes to stay under Captain Obi regardless of the danger posed by the Evangelist’s forces. In this regard, she is stronger, and just physically.

4 Matrona Was A Legend Of Giants (Seven Deadly Sins)

Initially, Matrona was one of the most warlike giants in the Seven Deadly Sins. She scorned Diane’s passivism, which led to hostility between the two women. When Diane first left to join the Sins, they were not on good terms.

RELATED: Attack On Titan: 5 Anime Heroes Who Would Join The Yeagerists (& 5 Who’d Refuse)

However, after being saved from mercenaries by a human, Matrona calmed down to such an extent that she even married him. When next meeting Diane, she was much more apologetic about her behavior and willing to reconsider the giants’ status as a warlike race. Regardless, Matrona keeps her body in shape since she realizes that danger may always be seconds away.

The agents of Baroque Works conspired against the Straw Hats during One Piece’s Whisky Peak arc. Despite having lulled them into a false sense of security, few were able to pose any challenge to Roronoa Zoro.

Regardless of having no armament haki, Devil Fruit, or even formal weapon training, Miss Monday threatened Zoro with raw muscles and stature alone. Nonetheless, Zoro’s swordsmanship skills were too much for her even at the time. Monday may have fared better than her subordinates, though she fell all the same.

A vampire with no love for humans, Striga was an antagonist in the Castlevania series. She used her hulking size, strength, and battle experience to marshal Carmilla’s armies as their decorated general. Despite decimating everything in her path, Striga was not as committed to the cause as her sister.

When Carmilla was assassinated, she abandoned her plans for expansion in favor of roaming with Morana. This does not suggest that Striga has been redeemed. Instead, she simply found something more fulfilling than watching her enemies scream and flee in fear.

Biscuit was one of Hunter X Hunter’s most memorable characters given her unique quirks. Although usually appearing as a small girl roughly Gon’s age, she is actually a towering middle-aged woman.

Biscuit prefers her childlike body over her real one since the latter is much more cute and approachable. Regardless, her real form allows her to unleash the full extent of her strength when it is necessary to do so. The Hunter’s obsession with aesthetics makes her dimensional and human while also calling societal standards of beauty into question.

NEXT: 10 Anime Characters Who Don’t Deserve Their Popularity