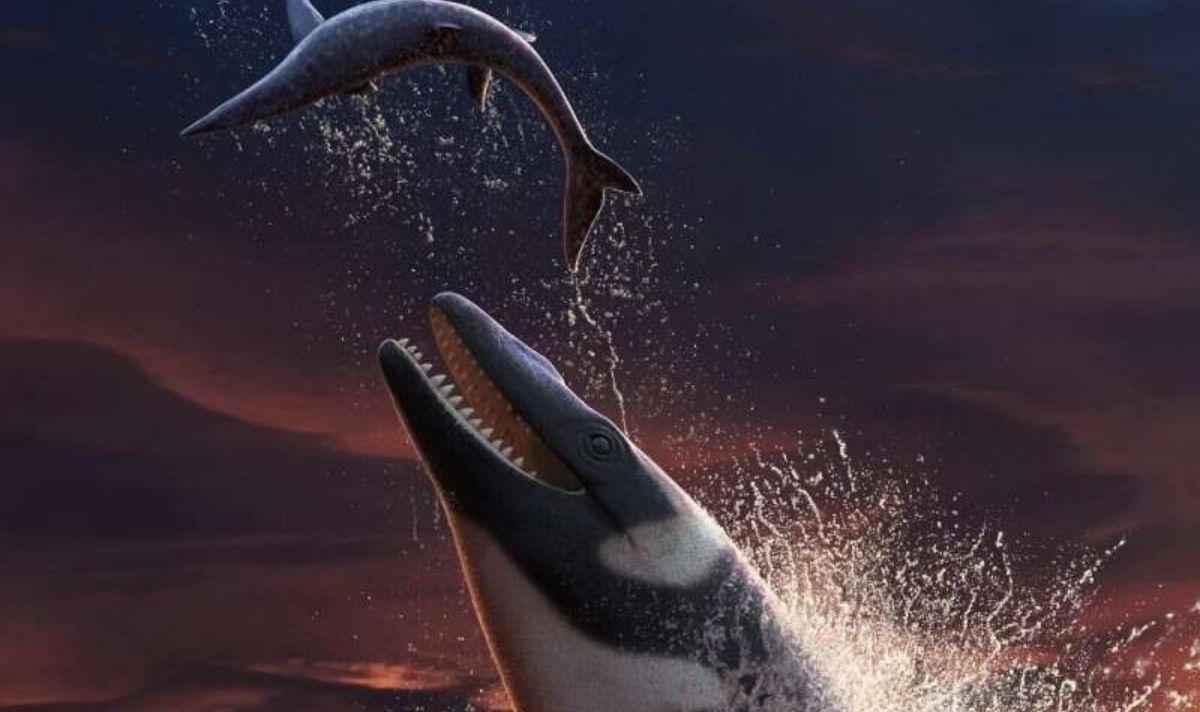 The ancient apex predator — which has been named “Thalassotitan atrox” — could grow to up to 30 feet in length and sported a five-foot-long skull bearing massive jaws with large, conical teeth like those of killer whales for holding and ripping apart huge prey. Paper author and palaeontologist Dr Nick Longrich of the University of Bath said: “Thalassotitan was an amazing, terrifying animal. “Imagine a Komodo Dragon, crossed with a great white shark, crossed with a T. rex, crossed with a killer whale!”

Thalassotitan was a species of mosasaur — enormous marine lizards that could grow up to 40 feet long are distantly related to modern iguanas and monitor lizards.

In the last 25 million years of the Cretacous, the mosasaurs flourished, growing relatively larger and more specialised, and began to occupy ecological niches previously filled by marine reptiles like plesiosaurs and ichthyosaurs.

Some species, for example, evolved to eat small prey like fish and squid, while other crushed ammonites (ancient relatives of the nautilus) and clams.

Thalassotitan, however, evolved to prey on all the other marine reptiles. This is evidenced by the fact that its fossilised teeth often appear chipped, broken and worn — and, in some case, are even worn down to the very root.

This level of wear, the researchers explained, would not occur from just eating fish, but must have been caused by biting into the bones of other marine reptiles and tearing them apart.

The remains of the terrifying new species were found in the north of Morocco, just an hour outside of Casablanca.

During the Late Cretaceous, this region was underwater, with the Atlantic having flooded northern Africa.

The researchers explained that nutrient-rich waters upwelling from the depths of the ocean at this time would have fed blooms of plankton that fed small fish, which in turn fed larger fish, plesiosaurs and mosasaurs — which then were prey for the monstrous Thalassotitan.

Remarkably, the team believe that they may also have found evidence of some of Thalassotitan’s victims, with fossils of large predatory fish, a sea turtle and parts of a plesiosaur and at least three individual mosasaurs showing signs of stomach acid damage, with teeth and bones partially eaten away.

Paper co-author and palaeontologist Professor Nour-Eddine Jalil of the Museum of Natural History in Paris said: “The phosphate fossils of Morocco offer an unparalleled window on the palaeobiodiversity at the end of the Cretaceous.

“They tell us how life was rich and diversified just before the end of the ‘dinosaur era‘, where animals had to specialise to have a place in their ecosystems.

“Thalassotitan completes the picture by taking on the role of the megapredator at the top of the food chain.”

The awesome predator would even have been a menace to other members of its own species — with the team reporting that Thalassotitan fossils appear to sport an unusually large number of injuries to their faces and jaws that would have been sustaining in intense fights over feeding grounds, mates, etc.

Dr Longrich concluded: “There’s so much more to be done.

“Morocco has one of the richest and most diverse marine faunas known from the Cretaceous.

“We’re just getting started understanding the diversity and the biology of the mosasaurs.”

The full findings of the study were published in the journal Cretaceous Research.