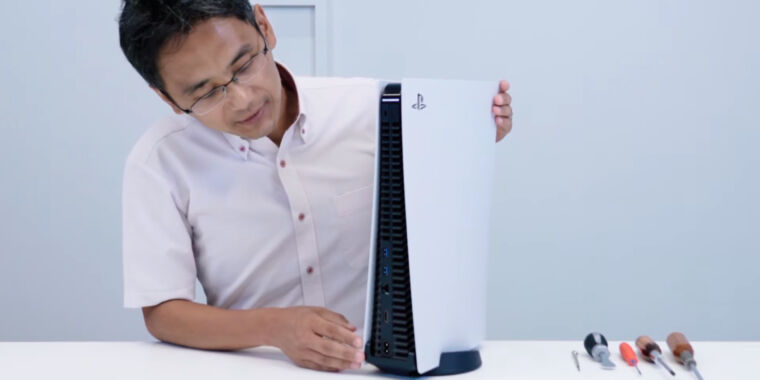 At its launch in 2020, the PlayStation 5 wasn’t just one of the biggest game consoles ever made. It was also one of the heaviest, with the full-fledged Disc Drive Edition weighing in at 9.9 pounds (4.5 kg) and the Digital Edition hitting 8.6 lbs (3.9 kg). Today, though, the eagle-eyed reporters at Press Start have noted the release of a new set of PS5 models that weigh about 13 percent less than their launch counterparts.

The new PS5 models (CFI-1202A and B for the Disc and Digital versions, respectively) first showed up on some Japanese retail sites over the weekend with a planned September 15 launch date. But Press Start reports that the new models are on shelves in many Australian retailers right now, including manuals listing their official weights at 8.6 lbs (3.9 kg) for the Disc Drive Edition and 7.5 lbs (3.4 kg) for the Digital Edition. No other changes are apparent in either the size of the system’s casing or the listed system specs, according to the report.

Lighter and more expensive than ever

Those who follow the minutiae of game console hardware manufacturing might remember that this isn’t the first internal revision to the PS5 hardware. The CFI-11XX models—which also hit Australia first in August 2021— came in at 9.25 lbs (4.2 kg) and 7.9 lbs (3.6 kg) for their Disc and Digital Editions, respectively. That effectively splits the weight difference between the launch model and the newest model hitting Australia today.

Later testing showed last year’s weight reduction was due to a smaller, redesigned heat sink that seemed to improve the console’s heat dissipation. It’s not immediately clear what makes the newest models lighter, but supplier-sourced reports from earlier in the year suggest Sony was moving toward a new, 6 nm production process for the system’s AMD-made CPU. Besides potentially helping with manufacturing yields, that change could also have been part of an internal redesign that sports fewer weighty parts than in the past (or just an even better, lighter heat sink).
The Australian launch of the new PS5 model comes days after Sony raised the suggested retail price of the PS5 by up to 13 percent in many non-US regions, including Australia. Interestingly, the Japanese price increase is set to go into effect on September 15, the same day that Japanese retailers list for the launch of the new CFI-1200 model.

Both Editions of the PS5 have shown a nearly linear weight-loss pattern in less than two years on the market. If those trends continue at the same rates, the Disc Drive Edition of the PS5 will weigh exactly zero pounds on August 31, 2034, with the Digital Edition hitting weightlessness on March 20, 2035. Frankly, we don’t see any reason to doubt the eventual release of a mass-free PS5 in the fullness of time.