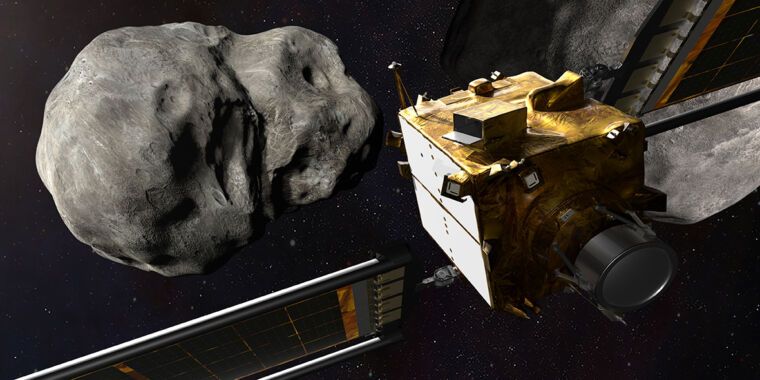 This coming Monday, NASA will broadcast its first attempt to modify the orbit of an asteroid, a capability that will be essential if we detect an asteroid that poses a threat of colliding with Earth. The planetary defense effort is focused on a craft called DART, for Double Asteroid Redirection Test, which will target a small asteroid called Dimorphos that orbits the larger 65803 Didymos, forming a binary system. If all goes according to plan, DART will direct itself to a head-on collision that slows Dimorphos, altering its orbit around Didymos. NASA has repeatedly emphasized that there’s no way for either asteroid or any material released by the collision to pose a threat to Earth.

Ars will be at the mission control center in the Johns Hopkins Applied Physics Laboratory (APL) for the planned collision, which will also be broadcast live on NASA’s YouTube channels. While we’ll know immediately whether the collision occurred as planned, it may take several months before we’re certain that Dimorphos’ orbit was successfully modified.

To get you ready for Monday’s festivities, we’ve put together a background on the DART mission and the planned follow-up observations.

DART and its final approach

The DART spacecraft itself is a bit over 600 kg and is notable primarily for its lack of instruments. Its solar panels include an experimental concentrating solar cell that occupies less space to generate the same amount of power as existing space-based hardware, and its main transmitter is testing a new antenna configuration. Its ion engine is also a next-generation evolution of previous NASA hardware.

But all of the action is handled through a single camera, the Didymos Reconnaissance and Asteroid Camera for Optical navigation, or DRACO, a 2,560×2,160-pixel single-color camera. DRACO and the transmission hardware are capable of sending an image back to Earth every second. During its final approach to Didymos, DART will be distant enough that round-trip transmissions will take over a minute. As such, the final approach and targeting of the asteroid will be handled by an on-board navigation system called SMART Nav (Small-body Maneuvering Autonomous Real Time Navigation).

Right now, Dimorphos is so small that DRACO is unable to resolve it, and it will stay that way until roughly an hour and a half prior to impact. As described by Evan Smith, DART’s deputy mission system engineer, the system will shift over to on-board navigation at about four hours before impact, and the SMART Nav will track the larger Didymos and use that for navigation until about 50 minutes before collision, or about a half-hour after it can be resolved. At 2.5 minutes prior to the collision, the ion engine will be shut off, and DART will coast into a collision at about 6 kilometers a second.

Even though Dimorphos is only about 120 meters across, it will completely fill the view from DRACO starting about two minutes before collision. “We don’t know what Dimorphos looks like,” said Nancy Chabot, a planetary scientist at the APL. “This is going to be the first time we even see what this asteroid looks like.” In the final image, sent a second before impact, it will resolve features that are only tens of centimeters across, according to Chabot.

And then, if everything goes well, the transmissions will stop.