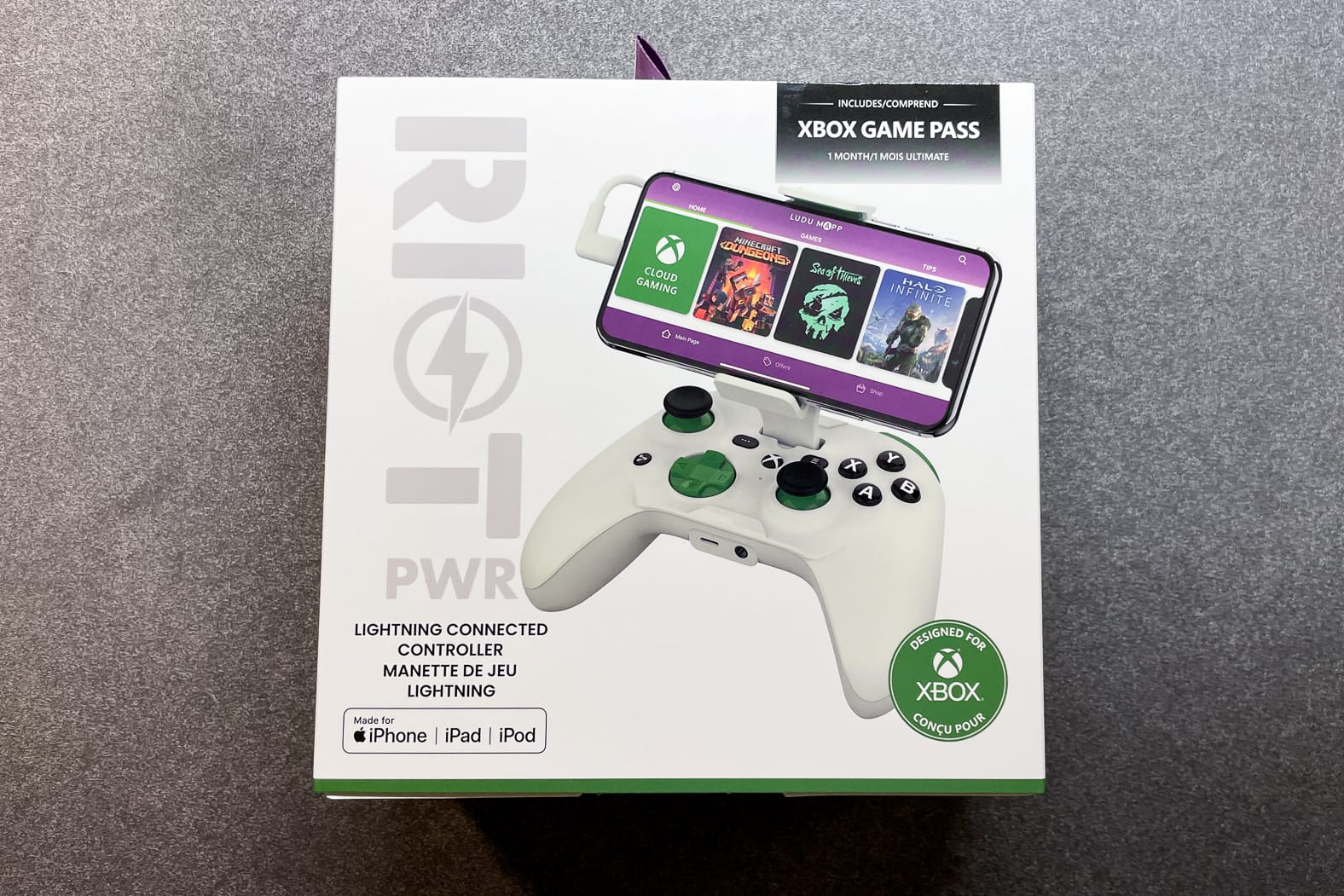 The controller enhances gameplay and is easy to use. The price is comparable to other console mobile gaming controllers. The companion app is not required for gameplay but does provide a list of confirmed compatible games for the controller. The controller is lightweight and since the Lightning cable is built-in, a no-lag connection is assured when you play.

In recent years, the mobile gaming industry has exploded in popularity. A growing number of people are playing games on their smartphones and tablets. While some mobile games can be played with a touch screen, others are better suited for a physical controller.

The RiotPWR Xbox Edition Cloud Gaming Controller for iOS is a console-style controller designed for use with iOS devices.

“This classic design provides a solid comfortable grip, while the two clickable joysticks, a D-pad and a host of buttons provide enhanced control, this is the first and only MFi controller to feature a dedicated Xbox button, meaning your mobile gaming experience is now as close to console gaming as ever before.”

The controller operates with plug-n-play technology but does have a companion app. Thanks to the Lightning connection, there is no lag during gameplay, and passthrough charging is available to keep your device powered while you play.

I admit that I’m not a typical ‘gamer.’ I enjoy video games and my gaming history goes back to the 1980s. My family had a Commodore 64 system that was destroyed by an unruly pair of pets that had frequent disagreements. I also lobbied my parents for a Super Nintendo when the gaming system was first released. That said, I don’t typically play games on a daily basis. I only mention that because I believe some of my physical comfort levels may be a bit skewed in the sense that my hands are out of shape. With that in mind, let’s take a look at this wonderful gaming accessory.

Several months ago, I reviewed the RiotPWR ESL iOS Gaming Controller. It is designed to mimic the design of the Xbox controller, but it’s not an exact replica like this controller. The main design differences between the two include the home button and the LED indicators on the face of the controller. In addition to that, the Xbox controller is white, green, and black while the ESL controller also has yellow accents. Finally, the Xbox edition controller comes with one month of Xbox Game Pass free.

RiotPWR has several console-style controllers available for both Android and iOS devices. They are very similar and they are designed to be clones of Xbox controllers rather than a Playstation layout.

The controller, like the ESL Controller, is bus powered and once it’s plugged into your device, it will power on. The cable is 26 inches long and is permanently affixed to the controller. This is one of the features that distinguishes it from a standard wireless Xbox controller.

I have used both wired and Bluetooth controllers with my iOS device and I’ve actually found the wired option to be better for me. With such a long cable, you don’t necessarily have to have the phone mounted to the controller while you play.

For example, I have a MagSafe charging stand on my desk that I mount my phone too, and then I just plug the controller into the phone and sit back in my chair. I would exercise caution if you choose this option for playing. If you move around a lot while you play, it may not be the best option as you don’t want your phone to end up jerked around.

The mount attachment simply snaps into its mounting port which when not in use is covered by a silicone flap. While it is very secure when in use, it is easily removed for storage or if you want to use the controller without the iOS devices mounted to it.

If the game is already installed on your device, there is a dialogue that will pop-up showing that the game can be opened. If it is not installed, you can select ‘Get’ and the game will be opened in the device’s App Store. Even though the Ludu app shows users what is confirmed as compatible with the controller, other games may still work with it. I also noticed that the Ludu app will show what titles are available through Apple Arcade.

One thing I will note is that some games have restrictions built into them about what controllers can be used during gameplay. One of those games is Call of Duty: Mobile. There are a lot of iOS controller options available but not all of them work natively with COD. In fact, COD only lists Xbox and Playstation controllers as the ‘approved’ controllers that are supported with the game.

That said, many of the other third-party controllers that have been released do work with the platform — including the RiotPWR controller. There are some controllers, however, that require additional setup to use fully with the game. To make sure that I didn’t have any issues with the controller/game compatibility, I opened it through the Ludu app. It worked perfectly.

One of the things about this controller that seems off to me is how lightweight it is. Because it’s designed like an Xbox controller it sits well in the hands and the grip feels natural. But, the controller is very light and when you add the phone to the mount, sometimes it feels a little top-heavy. This wasn’t a deal-breaker to me, but something to keep in mind if you play for long periods of time. I also noticed that my hands got a little stiff after playing for a while. I think this is more of a symptom of my hands being out of shape for gaming than a fault of the controller though.

Since the controller runs off of bus power, I wasn’t sure how to address the ‘battery life’ since it doesn’t really have its own battery. So, I will refer to this as power drain. The controller pulls power directly from the device it is connected to. So, naturally, this is going to affect your device’s battery level.

I don’t have a great basis for comparison on how different controllers affect an iPhone battery life, but I can say that after 2.5 hours of consistent gaming, my iPhone 12 Pro’s battery was down to 60%. I know that it was very close to 100% when I started. With a 40% power drain after 150 minutes, that ends up being around 0.27% of your battery that you are spending every minute.

Based on the specs for the iPhone 12 Pro (up to 17 hours for video playback), you should expect to burn approximately 0.09% per minute if you are watching videos. Gaming is more intensive, but I wasn’t expecting to have my battery drained 3 times faster than with standard video playback.

The RiotPWR Xbox Edition Cloud Gaming Controller for iOS is a lot of fun and I certainly felt as though my gaming experience was enhanced by using it. As is the case with all controllers, there are pluses and minuses to weigh. I personally love that it feels so much like an Xbox controller and that you have a hard-wired connection with it — without having to use a gamepad-style controller. Based on other third-party console-style controllers for use with iOS devices, I think its price is very fair ($70 at the time of publishing this article).