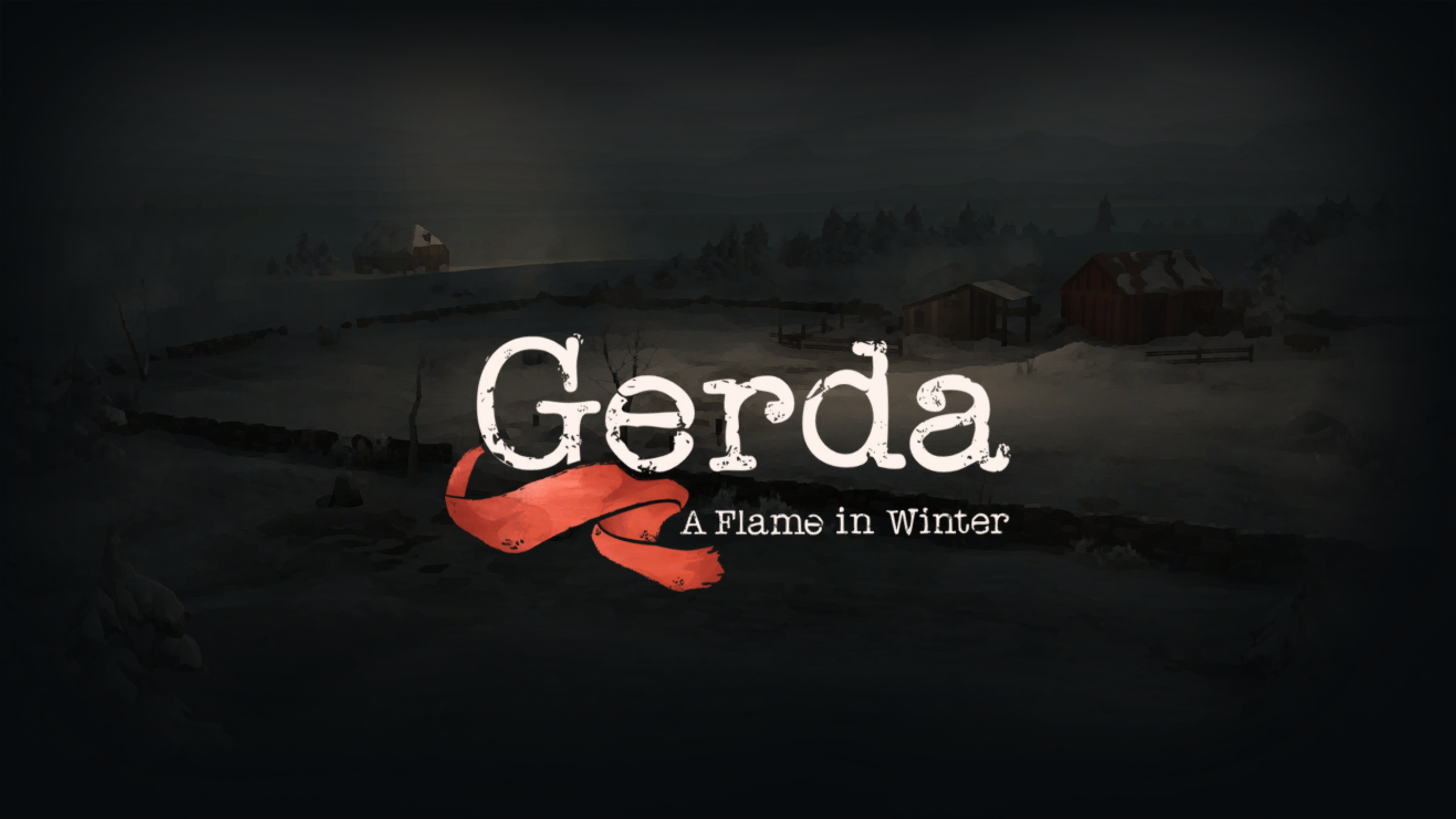 World War II was an event of such catastrophic devastation that it has cemented its importance in our world’s history forever. A war so impactful to so many across several continents, its legacy is still discussed and explored today. From countless books, TV shows, films, as even video games, such as Medal of Honor and Call of Duty: WWII, its influence still remains at the forefront of many people’s minds. Yet somehow, even after countless historical accounts and media adaptations, there are still more stories to tell. Gerda: A Flame in Winter from PortaPlay and DON’T NOD Entertainment is here to present its tale in way not seen before in mainstream media.

Get ready for some emotions.

In Gerda: A Flame in Winter, you play as the titular character, Gerda, a nurse living in the small Danish town of Tinglev. Her world is thrown into upheaval when the Nazis occupy her town during the height of World War II. A meek woman from a humble background, Gerda must use her intelligence and social ties to navigate the Nazi threat and save those she loves.

Gerda: A Flame in Winter is a bit of a departure from most modern WWII video game representations, being a point-and-click adventure rather than first-person shooter or a real-time strategy game. There’s no combat here, but that’s not to say that Gerda: A Flame in Winter is without interesting gameplay. Gerda will have countless decisions to make along her journey, from dialogue options to selecting which locations to visit at certain times. Unlike many games that claim to have numerous branching paths and endings, the choices you make in this game have a real impact on the story and its various outcomes.

Occasionally Gerda will come across a random encounter. Even these can have huge ramifications later on.

Honestly, that’s what really drew me in to Gerda: A Flame in Winter: the weight of every choice and action you make along the way. Seemingly superficial encounters with other civilians can later lead to different opportunities and storylines. The same can be said for carefully exploring each area. A modest trinket or a discarded paper can reveal unforeseen secrets later on. Take nothing for granted and be mindful of every response you give. A small kind gesture or act of defiance can greatly alter the events of the game.

Much of Gerda’s success or failure in certain situations greatly depends on how much people trust her. You’ll have to constantly monitor her favor rankings with the Dutch, Germans, Occupation, and Resistance. Nearly every NPC encountered in Gerda: A Flame in Winter has some sort of significance to the story at some point. Each time she talks to someone, a tab will appear on the right side of the screen that indicates their level of trust. In the beginning I tried appeasing everyone and telling them what I thought they wanted to hear, but I quickly discovered that wasn’t the best course of action.

Aiding a German soldier can bring resentment from the Dutch population, while making excuses for Resistance members can make the Occupation distrustful of you.

As I’ve said, each choice has an effect on the events of the game. Aiding a German soldier can bring resentment from the Dutch population, while making excuses for Resistance members can make the Occupation distrustful of you. Agreeing to help one person will cutoff your opportunity to assist someone else. No decision should be made lightly, making each encounter in Gerda: A Flame in Winter a puzzle in its own right.

At the end of each section, Gerda will recap the events of what just transpired in her diary. When this happens, you’re left with the choice on how you think Gerda feels about what’s going on around her. Depending on what you choose, Gerda will be given an ability point in either Compassion, Insight, or Wit. You’ll need certain amounts of points in each category in order to unlock or pass certain dialogue options. Sometimes if you’re lacking points in one category when speaking to someone, entire story beats can be lost to you.

Depending on what you choose, Gerda will be granted an ability point in either Compassion, Insight, or Wit.

Your ability points are also crucial when engaging with various characters. Wit does wonders for allowing Gerda to outsmart her challengers, while Compassion helps others to trust her in some situations. At some points Gerda will have a particularly difficult interaction, which opens up the option for a Chance Roll. The Chance Roll is presented as a roll of the dice, with the probability of success dependent on how many ability points she has, the level of trust she has with that character, and any mission-specific information she might have obtained prior to the conversation.

The chance of success is shown when selecting that option, although it’s incredibly vague. I failed quite a few “Easy” Chance Rolls and succeeded in a couple that were “Very Challenging”, so it’s all a bit of a crapshoot. Winning the Chance Roll can result in better intel and opportunities with no penalty to your ability points, while failing yields a more neutral or negative outcome. Sometimes it’s worth sacrificing an ability point or two to keep things running smoothly, rather than risk angering a potential ally.

Definitely not playing blackjack with a bunch of Nazis…

In addition to carefully navigating dialogue options, occasionally Gerda will find herself in more tense scenarios. There are several time-based sections, where Gerda will have a limited amount of time to accomplish a task or gain information before being discovered and/or failing. This same concept is repackaged through the game in several other ways as well. These instances include not making too much noise when sneaking around a building, and keeping your team from becoming overly agitated during a mission. There are subtle differences to each of these sections, but the core concept is the same. Personally, I loved the added tension these provided, as well as the break in the regular dialogue-based gameplay.

Be sure that tensions don’t run too high or your mission could result in failure.

Aside from the intriguing narrative, another way that Gerda: A Flame in Winter stands out is with its art design. This was a bit hit and miss for me, especially in the beginning. The character models are very simplistic, but PortaPlay was quite clever in their approach to its look. Inspired by Nordic Impressionists, the whole game feels like you’re playing an interactive oil painting. That being said, I have to admit that this effect is far more convincing whenever the characters are still. The rudimentary animations beneath the artsy filter are far more noticeable when the characters move around. The beginning levels don’t have the chance to showcase their beauty as much, since they’re mostly made up of long conversations at night in small spaces. Although, once the game opens up and you can fully take in the landscapes, it can be truly beautiful.

I also have to give credit to the sound design, which is much more subdued than your average game. The only voice acting, delivered by Gerda in moments of reflection, is heartfelt and convincing. The melancholy soundtrack fits the somber tone of the game. There’s nothing overly epic or bombastic in Gerda: A Flame in Winter, but I found the use of the single piano (in most instances) to be quite fitting. Like a lonely fragment of your mind expressing how it feels at any given point.

The character movements can be a bit stiff, but you can’t deny the beauty of this game.

Honestly, I was surprised by how much I enjoyed Gerda: A Flame in Winter. I thought it was going to be another depressing journey like This War of Mine, but it ended up being much more hopeful and insightful than I was expecting. I’m thoroughly impressed with how well written the characters are, making you see them all not as inherently good or evil, but rather in moral shades of gray. To me, this is one of the most realistic depictions of how people lived, died, and tried to survive during that reprehensible time in our history. Gerda: A Flame in Winter might be a bit of a slow burn, but hopefully it’ll light a fire in you to not repeat the same mistakes of the past.

Gerda: A Flame in Winter is available now on PC and Nintendo Switch.

A copy of Gerda: A Flame in Winter was provided by the publisher.