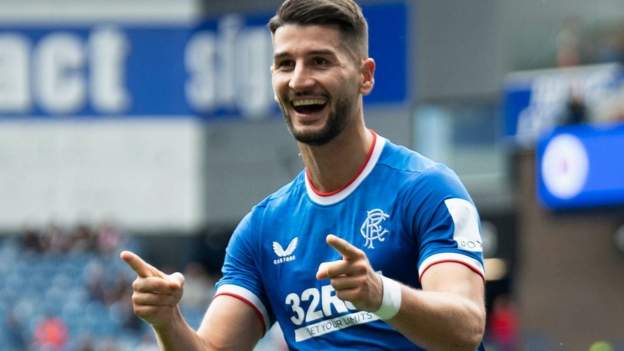 Rangers looked inspired by their progress to the Champions League group stage as they thumped Ross County to go top of the Scottish Premiership table.

The visitors will reflect on what could have been a second yellow card for home centre-half James Sands at 0-0, with Malky Mackay’s men slipping to 11th in the table after the defeat.

While Rangers manager Giovanni van Bronckhorst is pleased the way “the team is coming nicely together”, he told BBC Scotland: “We already had James Sands on a booking and I think it was a close call that went our way.”

“Frustrated” County counterpart Malky Mackay was more emphatic, suggesting: “Jordy Hiwula rolls him and James Sands puts his arms around him, falls with him and should have been sent off.

“There was nothing blocking the referee’s view. I am really disappointed at that. These decisions are huge.”

County had arrived in Glasgow on the back of their first league win of the season, but a fourth consecutive Premiership away defeat will come as no surprise considering they have never beaten Rangers in 20 meetings between the sides.

Rangers have now won eight of nine unbeaten home games and move a point ahead of Celtic before the reigning champions visit Dundee United on Sunday.

Only PSV Eindhoven have managed even a draw at Ibrox since Celtic’s win there in April.

The weight of expectation had clearly lifted from Rangers’ shoulders after qualifying for the Champions League in midweek. They were playing with such freedom that centre-half Connor Goldson found himself bounding into the six-yard box only to be denied by goalkeeper Ross Laidlaw from point-blank range.

Yet, having already been booked for pulling back Jordy Hiwula, Sands was fortunate not to receive a second yellow when the striker tumbled to the deck with the American’s arms wrapped around him as they chased a long ball over the Rangers defence.

Purrington was the unlucky man again as Scott Wright sped past the Englishman to deliver a cross that set up Colak for an athletic bicycle-kick finish.

A nutmeg from Ryan Kent, a backheel one-two with Tom Lawrence, another flick to Colak and the Croat fired clinically home from 15 yards for his seventh goal in seven games.

Colak was denied a hat-trick by another Laidlaw save before Davis completed the scoring, sweeping home a James Tavernier cross to send the home fans happy.

Man of the match – Scott Wright

It might not strike fear among their Champions League group opponents as much as Liverpool’s 9-0 thrashing of Bournemouth, but Rangers look to be building a head of steam as they bounced back from last weekend’s points dropped away to Hibernian.

With Alfredo Morelos dropped for the midweek game in Eindhoven after his red card at Easter Road, the Colombia striker faces a battle to regain his starting place given Colak’s goal-scoring streak – even if he meets manager Giovanni van Bronckhorst’s demand to improve his fitness and attitude.

There will, though, be tougher challenges considering Rangers have now scored 30 times in their last eight meetings with County.

County were dangerous in flashes and who knows what might have happened had referee Don Robertson sent Sands for an early bath.

Mackay has certainly been left “frustrated” by officialdom after retrospective red cards denied the County manager the services of defender Jack Baldwin and midfielder Ross Callachan.

And will he also regret not starting Jordan White considering the striker had scored in all four of his previous Premiership appearances for County against Rangers?

Rangers manager Giovanni van Bronckhorst: “In the first half, we attacked very well, but at the same time gave space away and lost a couple of balls too easily and that’s why we had James Sands really quick on a booking.

“After that, in the second half we changed our set-up a little bit, which gave us more control when we lost the ball, but I think throughout the whole game our attacking performance was good with creating a lot of chances.”

Ross County manager Malky Mackay: “A straight red for James Sands and, if it’s not a red, I don’t see why it’s not a second yellow.

“Rangers go and take him off at half time – it’s clear as day for me.”

Rangers host Queen of the South in the Scottish League Cup second round on Tuesday (19:45 BST), while County entertain Celtic the following evening at the same time.

Player of the match