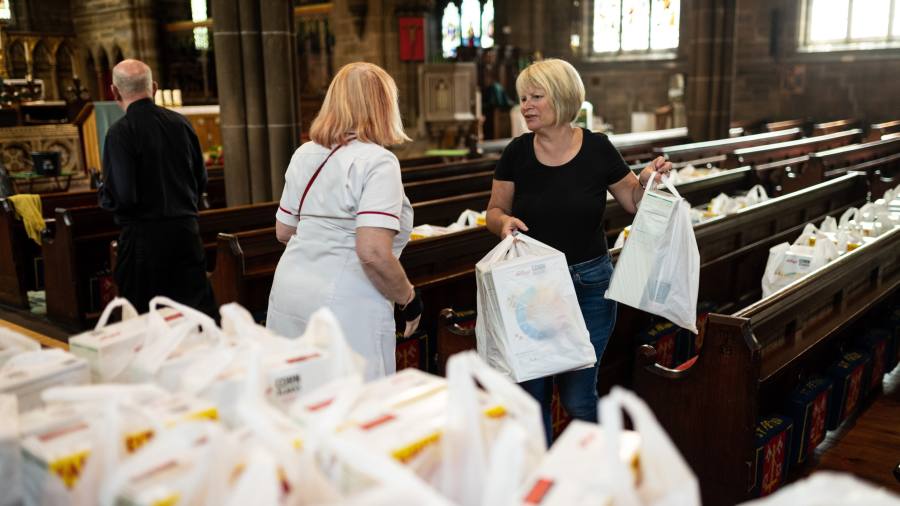 The community has already been living on a financial “knife edge”, said Brian Thomas, chief executive of Hospitality and Hope, which runs a shop providing bags of donated groceries for a small fee.

Since the coronavirus pandemic started, the number of people using the charity has doubled to 6,000. But Thomas said the most notable trend in recent months was that the number of people with jobs, especially those with families, referred to the shop had grown “exponentially”.

“I was talking to a lady yesterday whose landlord had put up her rent by £100 a month and then told her he was putting it up by another £50 because his costs have gone up,” said Thomas. “And, of course, her income isn’t going to go up. She was hysterical.”

The woman was on a prepayment meter for her energy and had a four-year-old daughter, he added. “She said ‘I’m making decisions every day whether to put money on my gas and electric or feed my daughter’,” he explained, underlying her plight by adding: “Feed my daughter. Not herself!”

On Friday, regulator Ofgem delivered the news millions of households around the country were dreading. It raised the energy cap by 80 per cent, which means an average annual bill will jump to £3,549 from October, driven by soaring wholesale gas prices, as winter approaches.

Worse still, the 4.5mn mainly poorer households on prepayment meters have a higher cap, and must pay in advance rather than spread their costs via direct debit over the year. To further compound the plight of millions, energy analysts forecast the cap could rise above £5,000 for the three months from January, just when the coldest weather usually hits, pushing energy usage higher still.

The impact could be fatal, said Thomas. “People are going to die,” he warned, as households ration their heating and eating over the winter. “We’re going to see lots of increased health issues and increased sudden deaths, I would suggest, in the elderly. It’s just tragic.”

January’s forecast would take average bills to half the average state pension, he added. He said the tax cuts, which so far have been at the centre of the cost of living policy outlined by Liz Truss, frontrunner to become the next prime minister, “were not going to impact” on those people.

On the other side of the river Tyne in North Shields, the local Citizens Advice Bureau has also been dealing with the effects of the cost of living crisis for several months. Since the last energy price cap rise in April it has seen the number of people coming for help with utilities debts double.

Its advisers have been helping with repayment plans, particularly for energy arrears and overdue rent, but the task has become increasingly impossible, said Chris Blackett, adviser at the charity.

“We’re used to having the answers,” he explained. “It’s getting to the point where we’re running out and there needs to be something external done, as opposed to what we can do. It feels very much like firefighting or trying to empty out a boat that’s got a hole in it.”

The CAB is increasingly seeing people who have never needed this kind of advice before, he said. One common refrain he hears is: “All of a sudden I’m in debt for the first time in my life and I don’t know what to do.”

Across the other side of northern England, in Greater Manchester, the anxiety among people queueing for food at a drop-in in Salford on the day before the price cap increase was palpable. Several parents wondered if they could afford school uniforms for their children, with term about to start.

The food project, run by the charity Bread and Butter Thing, provides three bags of donated groceries worth £35 for £7.50.

Pensioner Carol Jones said she was “very worried”, adding that her daughter was fretting about the costs of her teenage son going to college, on top of rising bills. She complained that the government were “not doing anything”, adding that she was already planning to go to her daughter’s house this winter for “body heat”.

As she collected her bags of groceries, Helen Scott said she was “getting scared” about what was coming over the winter. Her electricity bill had already doubled, she said. “I run a car and can just about manage to do that. But I’m worried I won’t be able to in future, so I won’t be able to visit my mum because she’s in a care home quite a way away.”

She only intends to heat one or two rooms this winter, she said, adding: “There’s going to be people dying of hunger in this country.”

One of the volunteers, Mark Thompson, was recently made redundant from his job as a security guard and while his wife Amanda works as an accountant, they now rely on the drop-in themselves. 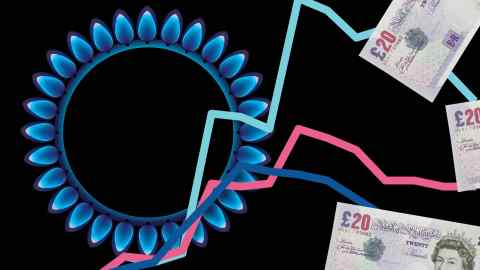 “We’d struggle without it,” said Amanda, pointing to the parallel rises in food bills in recent months. Mark said he was “really worried” about the rise in energy bills. “I think by Christmas everybody is going to feel it.”

Tom Aspen, who oversees the drop-in, said it was already heavily oversubscribed before the impact of the latest price cap rise. “You’ll see people come straight from work,” he said. “I had a misconception it would be homeless people or people out of work, but I’ve seen nurses come through.”

The same thing struck Thompson too: “The biggest thing that shocked me here was the nurse that came in uniform and her husband was a van driver. She said ‘without this we’d be really struggling’. It is absolutely shocking that people working full time can’t make it work. It’s heartbreaking.”