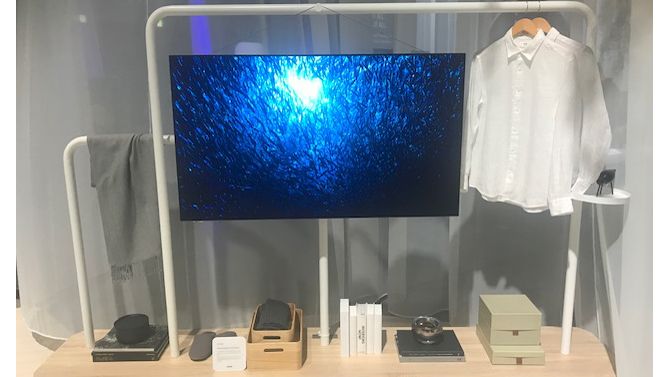 There’s an exciting TV hanging around Panasonic’s gauzy booth at IFA 2022. Alongside its standard OLED range, the electronics giant has artfully snuck in a high-end concept OLED TV where the panel and the connections are separate entities that interface wirelessly. This not only means that the screen can neatly lie flat against a wall, but it can also be hung on a single wire like a picture frame.

Weighing only 10kg, this 55-inch OLED only requires running power to it and has a long built-in cable that cleverly coils up at the rear without adding any bulk. The design lets users quickly move it around their home without committing to drilling holes and purchasing a wall bracket.

The business end is all kept hidden in a small white box no bigger than a book that can blend easily into your home and is capable of transmitting a 4K image to the panel over WiFi.

If you’re not ready to give up on your cables, then there are two recessed HDMI ports at the rear of the display, one eARC and one marked 4K120, as well as two USB inputs.

We’ve already seen companies seeking to reduce cables and clutter from around TVs and soundbars with Samsung’s One Connect box that uses just a single wire and LG’s Wowcast transmitter (compatible with some of its 2022 soundbar range), which can wirelessly beam lossless Dolby Atmos. Panasonic’s new OLED seems to be a logical evolution of the minimalist gallery-style TVs that seamlessly blend in living rooms, such as LG’s G2 and Samsung’s The Frame.

Panasonic already has a 43-inch 4K LCD TV with a similar design available in Japan called the TH-43LF1. This larger OLED model doesn’t yet have a release date, but we can expect to see it soon.

Read about all the goings on at IFA 2022

Our pick of the best OLED TVs: budget to premium