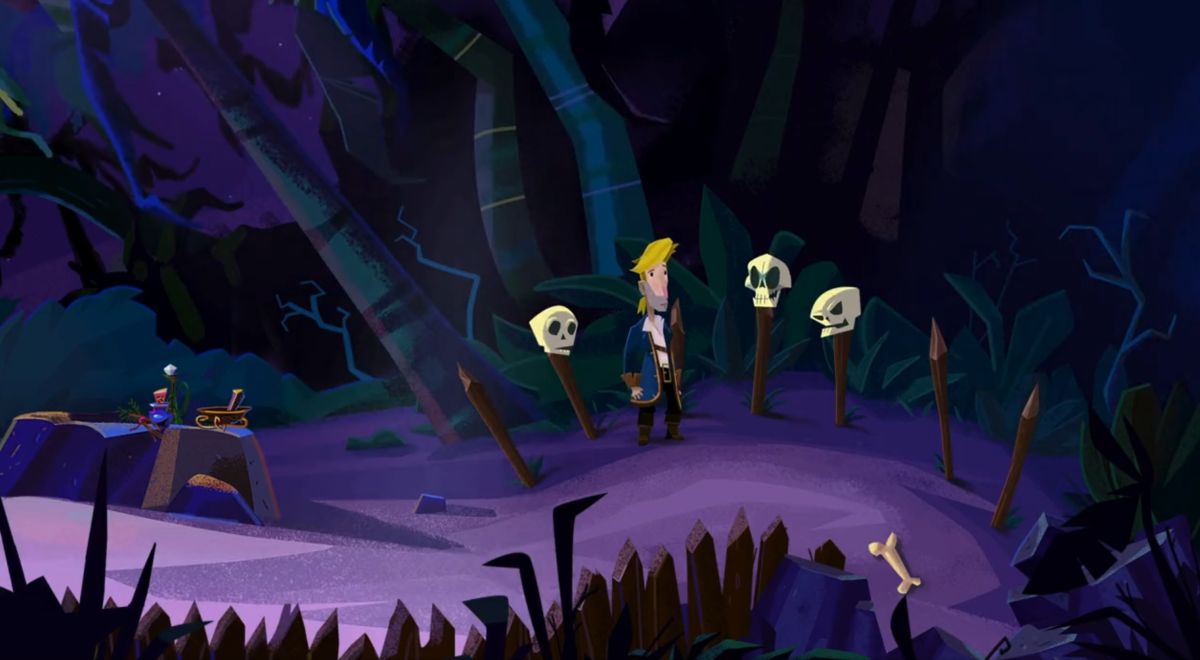 Return to Monkey Island (opens in new tab) developer Terrible Toybox has taken to releasing short, weekly clips of the adventure game sequel on what it has dubbed “Monkey Island Mondays” (which are better than Full Throttle Fridays, but not as good as Sam & Max Saturdays). This week’s clip is one of the most substantial so far, providing a glimpse of the game’s inventory system and reuniting Guybrush with pop culture’s second favourite disembodied skull after Yorick.

Posted on Twitter by Dave Grossman, the clip opens with Guybrush skulking through the brush of what looks like Monkey Island itself (the island’s giant stone monkey head is seen in the background), whereupon he encounters Murray impaled on a wooden stake. “How was your trip to Monkey Island?” Guybrush asks. “Damp,” Murray responds.

It’s #MonkeyIslandMonday! Here’s a clip from a section of Return to Monkey Island that @grumpygamer and I redesigned several times, about one of Guybrush’s favorite hobbies. pic.twitter.com/k48iY9ExYZAugust 29, 2022

Guybrush then proceeds to “conk” Murray over the head with a discarded arm bone, alongside a couple of other, less chatty skulls flanking Murray. In the process we see Guybrush’s inventory which contains yet more skulls (what is it with Guybrush and de-fleshed craniums?) as well as other items like a knife, a key, and some rather ominous-looking books. It’s also worth noting the inventory uses a drag-and-drop interface, which looks rather more intuitive than the old-fashioned verb-based UI.

The clip is yet more evidence that Return to Monkey Island is shaping up to be a delightful revival for the long-running series, although the rather dated Horse Armour jokes that accompanied last week’s Gamecom presentation did put a tiny grain of doubt in my mind. On that note, I feel obliged to point out that Bethesda has published some of the best DLC around in the last few years, including Doom Eternal’s two brilliant expansions (opens in new tab), and all the extra content (opens in new tab) that Arkane released for Dishonored. Frankly, it’s time to send that armoured horse off to retirement. Just make sure you take the armour off before you turn it into glue.

Horse Armour jokes aside, Return to Monkey Island looks great. You don’t have long to wait until Guybrush sails back onto your PC, either. The game launches on September 19, which is only three weeks away.