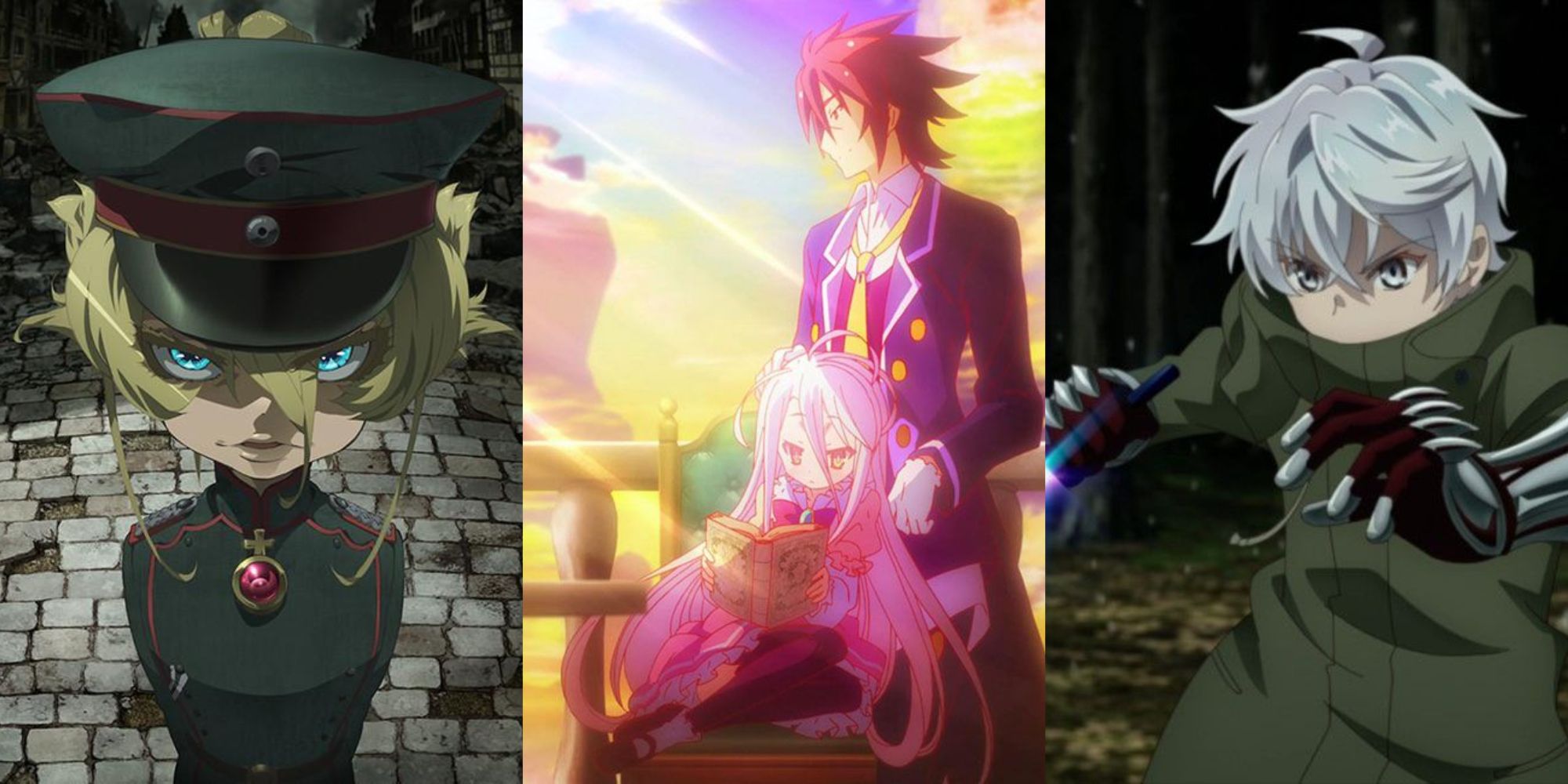 Most isekai anime feature characters with inventive ideas that alter the status quo of their respective worlds. Furthermore, their intelligence keeps the story exciting and engaging because individuals who apply their native knowledge and beliefs to foreign societies often foster exciting developments. It is largely for this reason that many isekai protagonists are shown to possess a significant level of intelligence.

RELATED: The Greatest Isekai Anime Of All Time

Even among these gifted protagonists, there are characters that stand a fair distance above the rest. These characters do not simply possess impressive intuition and innovative minds. They are also astoundingly resourceful, tactically astute, and thoroughly rational, most of these traits perfectly defining the characters on this list, chosen mainly for their superior intelligence.

Yuusuke was just a regular high school student until he was transported to a parallel world with two of his classmates, Hakozaki and Shindo. There, he met the game master, who explained that they would repeatedly be assigned missions each time they were transported to the new world. Also, they would return to their regular world after each mission is completed.

The missions they are given are often difficult, and Yuusuke always played a massive role in their completion. He is capable of thinking outside the box and giving effective direction to his allies, which helps to aid their progress significantly. Often, when the game master’s intentions are not expressly stated, he was able to decipher his intent and act accordingly with what he discovered.

Lugh lived his old life as an assassin and a tool for the organization he was contracted to. After being reincarnated into a new world by a goddess who wished for him to save the world from destruction, Lugh resolved to take a slightly new approach, deciding to live his life as his own.

He retained his profile as an assassin and remained frighteningly good at his job, capable of flawless infiltration, clever manipulation, and even possesses exceptional battle prowess. However, despite his proficiecny in assassination, Lugh is also flexible, and doesn’t restrict himself to performing these acts for the sake of assassination alone. This was seen he rescued a girl named Maha from an illegal prostitution ring.

8 Myne – Ascendance Of A Bookworm

Myne, formerly known as Urano Motosu in her old life, is a little girl who loves books too much for her own good. She was born into a poor family and naturally had no access to books as they were a rare commodity in her new world. This set her on a journey to create her own books, efficiently using her vast knowledge from her previous life obtained from immersing herself in countless books.

RELATED: How Ascendance Of A Bookworm Redefines Isekai

In order to earn money and reach a status sufficient enough for her to achieve her goals, she introduces a large number of products into her new society. However, this is not done without consequence, as multiple forces impede her at different stages during her quest. Nevertheless, she perseveres, creating things like cosmetics, decorations, paper, and even establishing a printing press, proving her potential to be almost limitless.

7 Rimuru Tempest – That Time I Got Reincarnated As A Slime

That Time I Got Reincarnated As A Slime is an isekai set in a world well known for its diverse societies and vast cast of characters. Rimuru, immediately after being summoned to this world, religiously explored his starting terrain and gained a large set of skills that would aid him greatly in the future.

Putting his skills and abilities to good use, Rimuru established proper relations with multiple societies, even leading a tribe of his own, showcasing his impressive diplomatic talent and capacity for leadership. Furthermore, he is not one that can easily be overwhelmed in a fight, and can find adequate solutions to seemingly impossible problems. An excellent example of this is when he saved the children Shizu wished to protect by infusing them with powerful spirits, a solution that was never previously explored.

6 Kazuya Souma – How A Realist Hero Rebuilt The Kingdom

At the beginning of the story, Kazuya is transported to a land facing a debilitating financial crisis. However, luckily for the king of this land—who was also responsible for Kazuya’s summoning—, Kazuya possessed an immense aptitude for leadership.

Kazuya was initially intended to be traded off to a larger nation as a solution to the Elfrieden Kingdoms inability to pay war tributes. However, he quickly displays his useful knowledge and, within three days, gathers the money needed for the tribute. Soon, he is pronounced king and began undertaking great exploits. Kazuya led the kingdom to prosperity and expertly commands his army in different battles across the map. As a multi-talented and resourceful individual, he comes up with more efficient methods of management as time passes on.

Kongming Zhuge was formerly a military strategist during the Three Kingdoms Period. After his death, he was reincarnated into modern-day Japan, presumably because his dying wish was to be reborn into a peaceful world.

While in Japan, Kongming meets a troubled singer named Eiko Tsukimi and is fascinated when he witnesses her remarkable musical talent. He discovers that Eiko is having trouble garnering attention with her singing and resolves to assist her to the best of his ability.

Using his vast knowledge, and being one of the most famous figures from the Three Kingdoms Period, Kongming constantly devises a clever set of plans to promote Eiko’s efforts. His tactics never fail, and throughout the series, he firmly proves his worth as one of the greatest strategists of his generation.

Shirogane Kei, or Shiroe, is a talented strategist within the world of Elder Tale. He was among the many players trapped in the game world, along with some of his friends and members of the Debauchery Tea Party group. He was formerly the group’s main strategist but eventually formed his own guild, which he named Log Horizon.

Shiroe is known for his strategic brilliance, and he shows it on many occasions throughout the series, commanding his comrades effectively during their battles and emerging victorious as a result. He also uses his eight years of experience playing Elder Tale to the maximum, as he repeatedly finds creative new ways to use spells and skills alike.

Ainz Ooal Gown is an extremely powerful being most likely unmatched by any other entity in the world of Yggdrasil. He was formerly a regular salaryman who went by the name Suzuki Satoru. However, after being trapped in the Yggdrasil game world, he decides to make the most of his new life as a formidable overlord.

Ainz is a calculating individual. He usually refrains from taking significant action until he has an adequate level of information needed to act. He is also highly meticulous and leaves no room for error in any of his endeavors, thoroughly making sure to always think everything through. When matters beyond his understanding do arise, he has his loyal subjects take care of them and distribute tasks effectively among his underlings.

2 Tanya von Degurechaff – The Saga of Tanya The Evil

Following the death of a salaryman at the hands of a subordinate he had recently dismissed, he is confronted by a being who claims to be god and expresses his absolute lack of faith in him. This entity is aggravated by the man’s lack of belief, and as a result, reincarnates him as a little girl in an alternate world with severely harsh conditions, now with the name Tanya von Degurechaff.

Tanya is discovered to have a significant aptitude for magic at a young age and is enlisted into the army at age 9. With her old memories and twisted values intact, Tanya’s primary goal is to rise up the ranks as quickly as possible. She is ruthlessly efficient and possesses astounding strategic aptitude. She is capable of formulating advanced military tactics in a short period and can even uncover false truths relayed to her by her superiors. Furthermore, she directs her company on the battlefield with such efficiency that they have never been shown to lose a battle.

1 Sora and Shiro – No Game No Life

The Sora and Shiro sibling duo practically count as a single entity, as they cannot properly function without being close to one another and share the collective name Blank. They are unbeatable game masters ranked number one in over 280 games. However, they both have social shortcomings, with neither interacting much with the outside world. Fortunately for them, this all changes when they’re summoned to another world governed by the concept of games.

In this new world, the siblings’ abilities shine brighter than ever, as their social status now rises in conjunction with how well they do in games. They both have their individual roles, with Sora being the charismatic one and Shiro being the logical intellectual. On multiple occasions, they have gotten the better of beings said to be far superior to humans. The most notable being their game against the immensely powerful Flügel named Jibril. As deprived of oxygen, with the earth’s surface erased and on the brink of the world’s destruction, they still came out on top.

MORE: Most Intelligent Anime Characters Of All Time