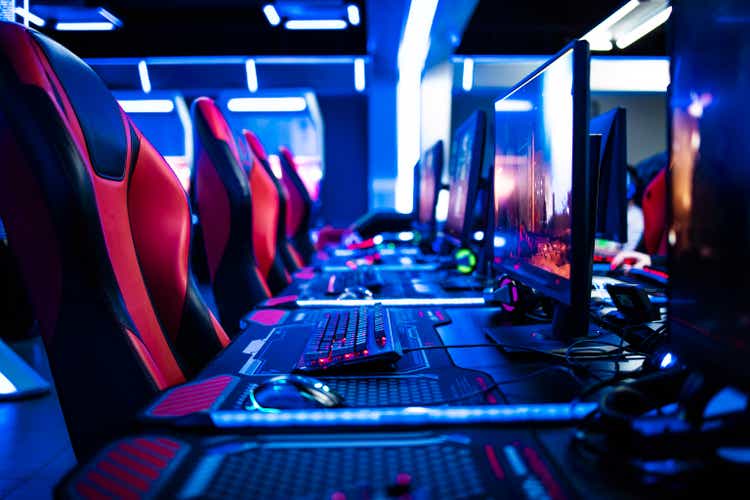 One of the best ways to make a lot of money is to invest in companies that come in at the ground floor of new industries. In recent years, one of the most interesting prospects has been the Esports market. Although 20 years ago it would have sounded crazy that people would be able to make a living off of playing video games, today the concept is commonplace. Highly competitive gamers spread across a large number of different games have created an entirely new market for investors to benefit from. But with this enthusiasm can also come a significant amount of risk. Just because a company operates in a particular market and it is an early entrant into that space does not mean it offers investors tremendous upside potential. One new player that investors had the opportunity to buy into that seems to be rather risky is Mobile Global Esports (NASDAQ:MGAM). With virtually no operations under its belt and a tough road ahead for it if it is to achieve its goals, the company truly is a risky prospect and investors in it should tread cautiously.

According to its most recent investor prospectus, Mobile Global Esports is an enterprise focused on promoting Esports, largely throughout India. The company was originally organized in March of 2021 with the sole purpose of carrying on and expanding the Esports business that was started by its parent company, Sports Industry of India (also known as SII). As part of this set-up, SII, which remains a shareholder in Mobile Global Esports, has granted Mobile Global Esports Exclusive rights to develop, organize, promote, and monetize mobile Esports events in collaboration with AIU and EUSAI. The first of these entities, AIU, is also known as the Association of Indian Universities. It operates as an academic and sports body that represents 854 major universities. It has its own sanctioned esports events as well. Meanwhile, EUSAI, also known as Elite University Sports Alliance of India Pvt. Ltd., is a for-profit subsidiary of SII that has direct contracts with 73 leading Indian universities involving the exclusive right to organize and monetize a range of sports, including Esports.

The management team at Mobile Global Esports sees this as a big opportunity to capitalize on a large but nascent market. At present, the university system in India has an estimated 37 million students, leaving open the opportunity for tremendous growth as Esports continues to expand. Of course, Mobile Global Esports will not just focus on esports altogether. Instead, its primary focus will be on mobile Esports. This is because this is the fastest growing segment of the Esports market at this time. Long term, this could ultimately prove to be a really interesting opportunity for investors. But at present, it’s a very small market that the firm is playing in. According to one source, for instance, the global market for mobile games is currently estimated at about $125 billion. With an annualized growth rate expected of it of 8.7%, it should climb to $174.5 billion by 2026. However, the overall opportunity in India today is worth only $3.8 billion, with that market expected to expand to just $5 billion by 2026. Issues regarding low 5G exposure are certain to approve problematic for the market. And it’s also true that while India represents a massive opportunity in the long run for pretty much any industry, it is still very much in the development phase economically speaking. Markets such as Esports are bound to take a backseat to more critical industries.

Mobile Global Esports expects to go on to generate revenue in a number of ways. First and foremost, it seems to be focused on hosting events. On its own, the company did not host any events through the end of its latest fiscal year. However, SII has hosted no fewer than 41 university Esports tournaments over the last 18 months. Since January of 2022, the esports events have attracted over 632,000 unique viewers. And Mobile Global Esports is now slated to be the exclusive organizer of the only officially sanctioned national championship for university esports in India. Hosting these live events will be expensive, but management does plan to monetize by focusing on standard approaches like advertising, encouraging in-app purchases, offering subscriptions, and more.

The company does have plans to generate revenue in other ways. For instance, it currently hopes to integrate the Esports concept into a social platform that will include a game library, access to tournaments, and various social features. Though it’s still early, the company is forecasting per-user net revenue on its social gaming platform of $10.80, with data revenue coming in at $24 per user per year. Its current target is to hit 2.6 million digital users in 2023. If this comes to fruition, the end result would be net revenue from its social gaming platform and data sales of $90.5 million annually. Outside of this, the company also has a software and management agreement with Artemis Avenue that gives the company a license to use compression technology developed by affiliates of Artemis in order to improve Internet connectivity, deal with uneven bandwidth, and more. They currently claim that this compression technology reduces video file sizes by up to two-thirds. And the company also has the option to dive into the ownership and/or management of Esports teams. One article from Forbes claimed that the top two global esports teams are valued at over $300 million, with estimated earnings from them totaling $24.7 million in 2021.

All of this looks great at face value. But the fact of the matter is that Mobile Global Esports is an incredibly risky prospect at this point in time. Essentially all of the company’s operations referred to activities actually engaged in by SII, leaving the business with almost no real operating history. The firm also only recently went public, bringing in gross proceeds from the issuance of 1.725 million shares of $6.9 million. After everything is said and done, it’s estimated that the company will have cash and cash equivalents of just $5.1 million on its books. Beyond that, it doesn’t really have much of anything at all from a balance sheet perspective. What’s more, it’s also the case that the investors who purchased shares in this offering only own 9.3% of the company’s shares outstanding, so outside investors have little control, if any, over the enterprise. And yet, based on current pricing, the company has a market capitalization of $155.3 million as of this writing. That’s quite a bit of money for very little in terms of what the company has been able to demonstrate.

Based on all the data provided, I really am intrigued with what the future will look like for Mobile Global Esports. I am a big believer in the Esports market. However, buying into this business without more details being provided by management is incredibly risky at this time. The firm has almost no value in its balance sheet and it’s unclear just what kind of outcome to expect from its current initiatives. Management has some pretty bold forecasts for the next few years, but anybody can forecast anything. It doesn’t mean that it will come to fruition or even come close to it. Another item that I discovered in its prospectus is that while much of its revenue will come from currencies outside of the US dollar, most of its expenses will be denominated in dollars. That further complicates things because of the foreign currency fluctuations it will have to deal with. At the end of the day, I wouldn’t say that I’m bearish on the company. After all, it could experience a tremendous amount of upside if all goes right. Rather, I would make the case that this is a high-risk / high-return opportunity where the risk and return are probably commensurate with one another.