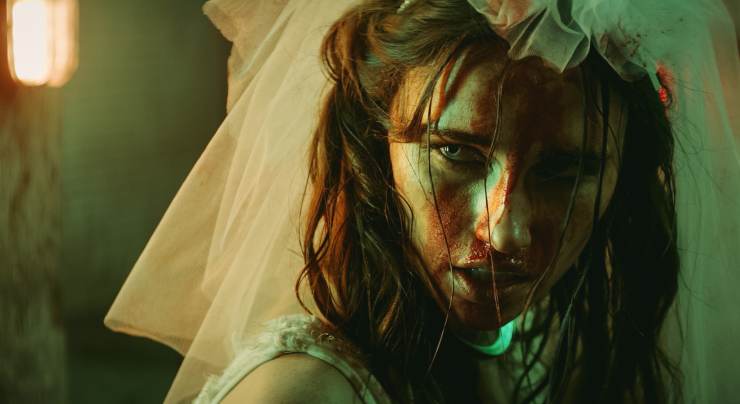 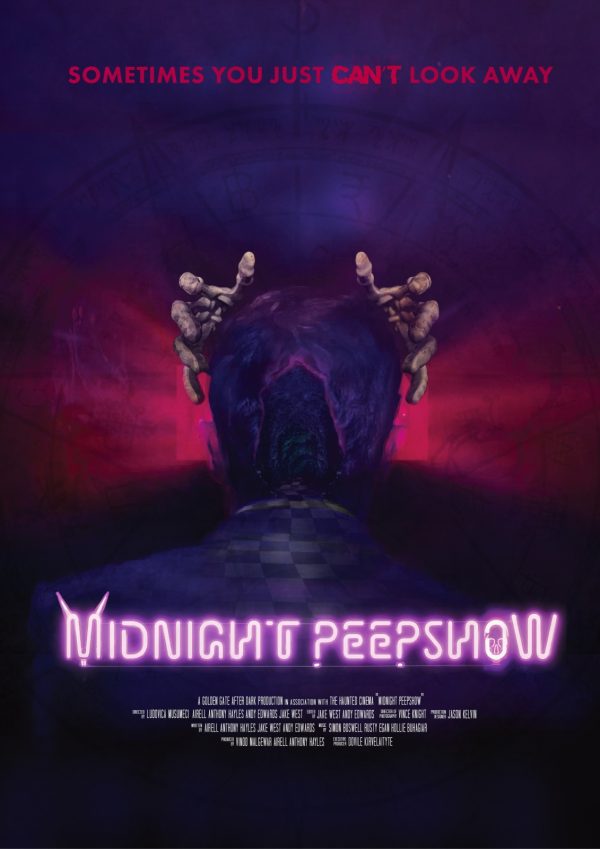 A madame owns a Soho peepshow with a difference – the sights on offer are tailor-made to its customers’ deepest sinful fears.

Horror anthologies are a bit like pizza; even when they’re not that great, there’s still almost always a baseline level of primal gratification they provide. Such is true of the middling Midnight Peepshow, an intermittently engaging and laudably deranged short film compendium that doesn’t quite achieve gonzo synergy between its parts.

The wraparound story (directed by Ludovica Musumeci) kicks off on a Valentine’s Day evening in Soho, where middle-aged Londoner Graham (Richard Cotton) stumbles upon a mysterious late-night peepshow. Once inside, three beautiful, tortured women each show him a disturbing, sexually tinged tale – for a cost, of course. Crucially, it’s all linked to The Black Rabbit; a shadowy sexual fantasy website hidden on the Dark Web.

Short #1, “Personal Space” – directed by Arell Anthony Hayles (They’re Outside) – follows the dysfunctional relationship of Alice (Roisin Browne) and her partner David, as is interrupted by the arrival of a sudden violent force. Though messy, there’s an engaging throughline here and some genuinely surprising reveals, while Roisin Browne’s go-for-broke performance is the glue holding it all together.

Next up we have “Fuck Marry Kill” from Andy Edwards (Ibiza Undead), where bride Helen (Miki Davis) wakes up in a grotty industrial locale with three men, as all of them become unwitting “contestants” in an especially effed-up “game.” Helen is forced to choose which of the three men she’ll fuck, marry, and kill over a series of timed rounds.

The Saw influences are strong in this one, and while the dialogue vacillates between genuinely funny and straight-up cringe-worthy, it is a giggle to see the men verbally battling one another in the hope of manipulating Helen into securing their own freedom. Thanks to an amusing final reveal and a solid turn from lead Miki Davis, this makes the most of its brief 20 minutes. Also keep your ears peeled for Zach Galligan, who provides the voice of the Games Master.

And rounding things off is “The Black Rabbit” from Jake West, in which Isabel (Sarah Diamond) seeks to use her sexuality in the pursuit of personal emancipation. As the final short of the bunch, this is the one that circles back to the wraparound and aims to thread everything together neatly. This is also where the wheels most markedly come off the enterprise, as it slaloms into goofy tech-thriller territory and arrives at a predictable final rug-pull that feels more perfunctory than impactful.

All in all, Midnight Peepshow is a schlocky good time to a point, even if the sexually charged nature of the shorts may leave some uneasy. Granted, it’s certainly taking aim at structural misogyny in depicting the drastic means through which a woman may feel compelled to escape it, yet the shorts still walk a fine line between critique and exploitation.

Technically it’s clearly conceived on a low budget yet generally looks “good enough,” even if the use of CGI for several sequences was clearly optimistic. Digital gore in one key moment is especially distracting, though the VFX exterior of the peepshow has a more appreciably stylised look.

As low-budget horror anthologies go Midnight Peepshow is a fair effort, yet held back by its conceptual flimsiness. With a stronger wraparound story and more potent throughline across the shorts, the filmmakers just might’ve been onto something here.