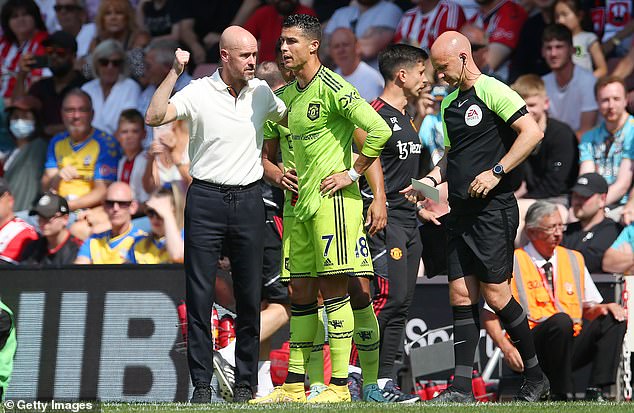 MATT BARLOW: It’s looking like farewell for Cristiano Ronaldo after he was relegated to the bench AGAIN in Man United’s win over Southampton… the feeling that this could be end for him at Old Trafford won’t go away

By Matt Barlow for The Mail on Sunday

One year after his glorious return to Manchester United and Cristiano Ronaldo lingered before the jubilant away end at St Mary’s with just a hint of farewell.

He had graced the pitch for less than half an hour, sent on as a second-half substitute to replace Jadon Sancho as Erik ten Hag rolled through his changes to protect a slender lead.

There was one glimpse of goal for Ronaldo, a brief chance when the ball dropped at his feet in the penalty area, quickly closed down by a sliding tackle from Moussa Djenepo.

And an attempt to slip clear on the counter-attack was foiled when Ronaldo was outpaced by the recovery run of Mohammed Salisu, 14 years his junior.

There was an injury scare, which required treatment soon after a clumsy challenge on Kyle Walker-Peters, who also dared to outrun Ronaldo as he tidied up at the back for Southampton.

Overall, there was little positive impact from one of the greatest footballers of the modern era, which only added to the feeling that he might be on his way out of Old Trafford.

‘We plan with him,’ insisted Ten Hag, when asked if this might be the last time we see Ronaldo in a Manchester United shirt.

Pushed on whether that meant he would not be allowed to leave, the United boss only added: ‘I hope so.’

On BT Sport, Paul Scholes made the case for keeping his former team-mate. 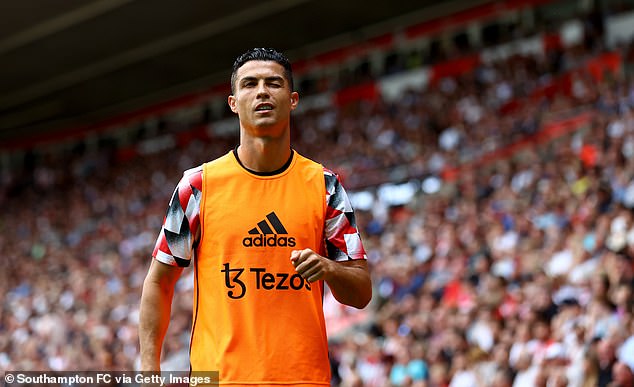 ‘I thought watching the game today that they needed Cristiano, he can be that focal point that they needed centrally,’ said Scholes. ‘He’s 37 years old now. He isn’t going to be running away from people.

‘He is very good holding the ball up and getting on the end of crosses, so I hope he doesn’t go. If he does go, they are going to need a centre forward.’

Still, doubts remain. It was a restless summer with Ronaldo granted permission to report late for pre-season training amid a whirl of stories about agent Jorge Mendes offering his services to other clubs.

Ten Hag, meanwhile, is reshaping this team, and praised Marcus Rashford for threatening the space behind Southampton’s back four, to follow an impressive display in the same centre forward role against Liverpool on Monday.

‘He was quite effective,’ said the United boss. ‘He understood he has to be a target at times. He was the one who creates the situations. He was involved and he played an important role in the first 15 minutes after half-time.

‘That is what I expected when there is a lot of pressure on the ball — that there is a striker that we can play over and he did really well.’ 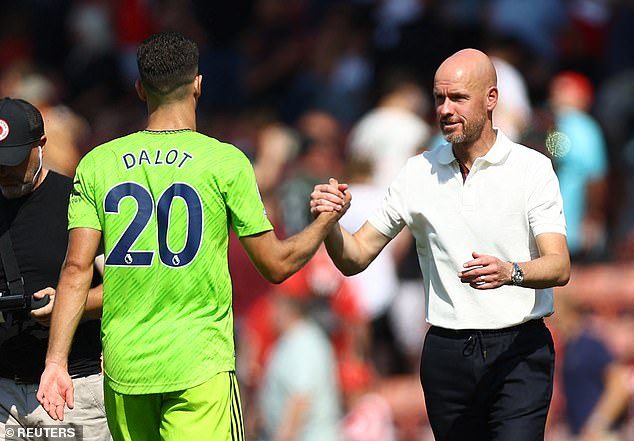 Rashford’s run created the space for Bruno Fernandes to score the only goal of the game, early in the second half, from a cross by Diogo Dalot. Fernandes ran to celebrate with substitutes Ronaldo and new £70million signing Casemiro as they warmed up.

Fernandes is often more effective in the absence of Ronaldo and has responded to the responsibility of being captain.

‘This gives him an impulse, the captaincy,’ said Ten Hag. ‘We saw it on Monday, where he played a great game, especially the physical part, creating chances.

‘Today he brought the same on the pitch and the finish was really fantastic. I would also mention it was a team goal.’

Casemiro came on to make his debut in the 80th minute.

‘It was quite good for him to see the Premier League, it’s a different style,’ added Ten Hag. ‘He now has a pre-season. He has played 90 minutes one time. We have to integrate him into the team and for a way of playing with his team-mates.’

Whether this will include Ronaldo, his old pal from Real Madrid, remains to be seen.