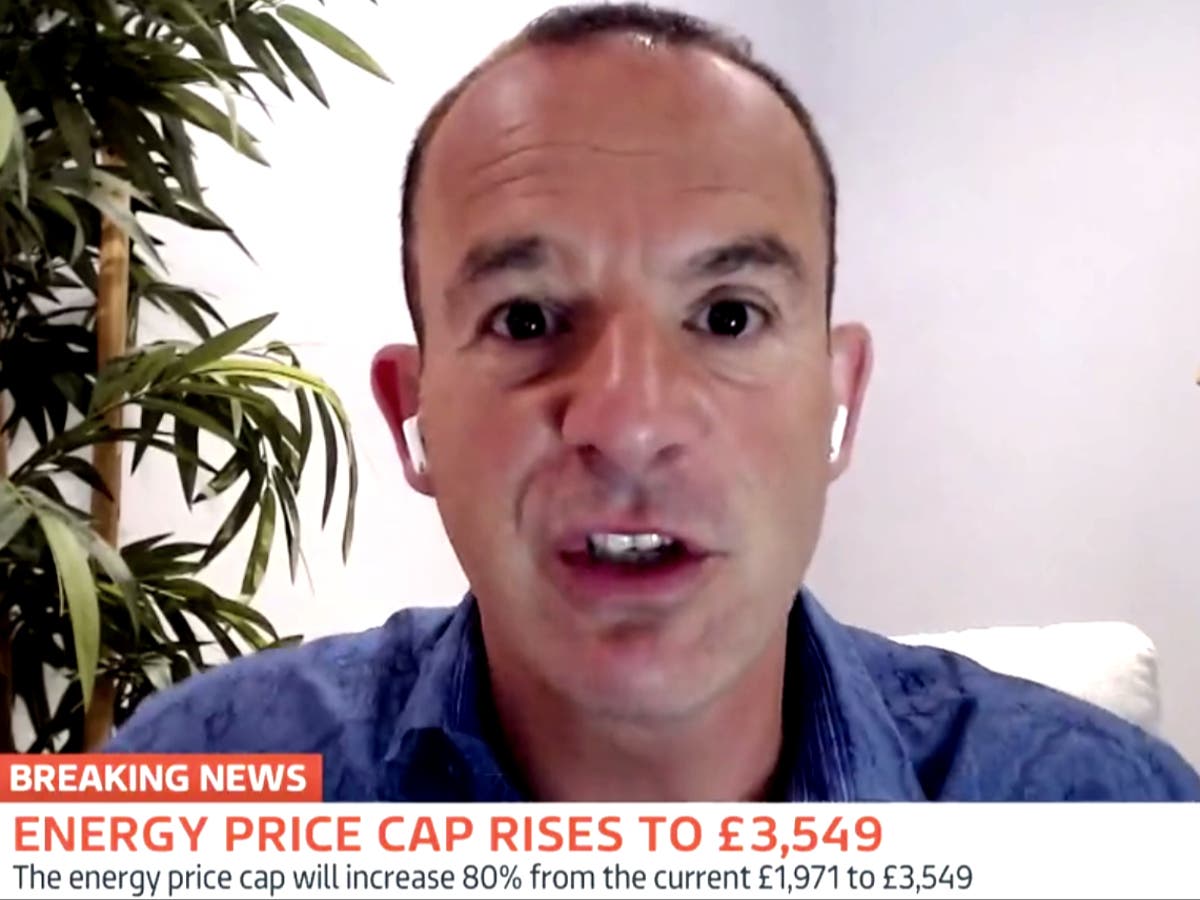 A visibly distraught Martin Lewis has attacked the government over its failure to address soaring energy bills, which threaten to drive millions into fuel poverty this winter.

Money saving expert Mr Lewis was speaking in the wake of Ofgem, the UK energy regulator, raising the energy price cap – the maximum amount utility companies can charge standard tariff customers – from £1,1971 to £3,549 from 1 October.

That represents an 80 per cent increase and means the average customer will be £1,578 worse off through no fault of their own.

Meanwhile, the country’s 4.5 million pre-payment meter customers, who are often the most vulnerable and already up against it, will see their average annual bill rise even further to £3,608.

Will you struggle with the new energy price cap? If so email [email protected]

British households therefore find themselves facing desperate circumstances this autumn, with the cost of living already spiralling and inflation now at a 40-year-high of 10.1 per cent, driving up the price of essential goods.

Worse, industry forecasts are already predicting even steeper rises in the cap for future quarters, with Cornwall Insight analysts warning it could increase again to £4,200 on 24 November and then to £5,300 or higher in the new year while Auxilione foresees it hitting £6,823 by April 2023.

Speaking to ITV’s Good Morning Britain, Mr Lewis told hosts Kate Garraway and Adil Ray of the thousands of messages he receives about the crisis from frightened members of the public: “The panic and desperation across the country I am seeing in my email bag is… just awful, it’s awful, and we should have a plan in place today!”

In an interview with Charlie Stayt on BBC Breakfast, the consumer champion rebuked Boris Johnson’s government, which has looked rudderless since June with the outgoing prime minister largely seeing out his premiership on holiday and the battle to succeed him between Liz Truss and Rishi Sunak dragging on interminably.

“To allow people to stare into the pit of financial doom that is coming this winter without offering them the torch at the end of the tunnel and saying ‘help will come’ and being specific is terrible for people’s mental health,” Mr Lewis warned, confessing that he personally had been out of tips and suggestions for more than six months, emphasising that it was now up to the state to step in.

“I’m begging and praying and pleading that there is more help,” he added.

On Nicky Campell’s show on BBC Radio 5 Live, the pundit said that he had first warned of the coming crisis on his own ITV programme back in March, stressing that everyone knew the energy bills crisis would worsen and attacking the government for insisting on waiting for Ofgem to announce its precise figure before responding.

“It’s a published algorithm based on a single underlying rate, the wholesale year-ahead rate, the predictions were always going to be spot on the nearer we got to the mark,” he seethed, a figure of frustrated compassion.

“To have this announcement come today without having the help in place so people would know what would come is frankly irresponsible.”

Mr Lewis also rubbished the government support package introduced earlier this year by Mr Sunak during his tenure as chancellor, which includes a £400 discount on household energy bills, a £650 one-off payment for those on means-tested benefits, a £300 payment to pensioners and £150 for people on certain disability benefits.

“The help in place is clearly nowhere near of the scale of magnitude needed to get people to survive this,” he said.

Earlier, Mr Lewis, who donates the fees from his media appearances to the charity National Energy Action, had dismissed the idea that he had been engaging in “doom-mongering” on Twitter and appeared on BBC Radio 4’s Today programme to call the crisis a “genuine social and financial catastrophe that is putting lives at risk”.

“I’ve been accused of catastrophising over this situation,” he told the Today hosts. “Well, the reason I have catastrophised is this is a catastrophe, plain and simple.

“If we do not get further government intervention on top of what was announced in May, lives will be lost this winter.

He warned that many households could end up paying far more than the cap, pointing out that: “You could easily be paying £5,000 or £10,000 a year if you have high usage.

“I worry terribly for some of those who have disabled children or disabilities themselves who need lots of electrical equipment to keep their houses warm because of medical conditions.”

On the prospect of the cap going up by a further 51 per cent from January to £5,386, he cautioned that bills would become “unaffordable” for many.

“We must hope that once we have somebody in place [as PM], they will come up with a robust, strong policy that we can all get behind, that feeds people and heats people, so we don’t have people dying because of these price cuts these winters,” Mr Lewis concluded.

“I suspect if it isn’t in place, then people coming from the Don’t Pay movement are going to become a louder voice in this country.”