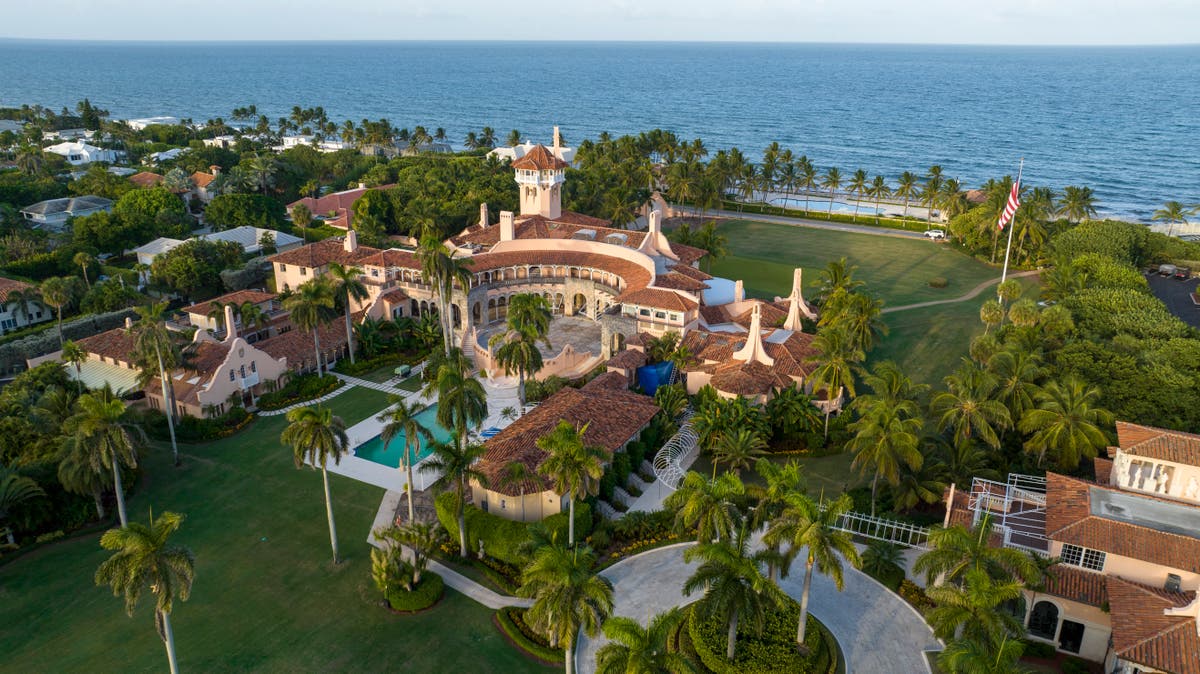 The redacted affidavit which FBI agents used to obtain a warrant to search former president Donald Trump’s Palm Beach, Florida home has been unsealed, revealing more details about what the Department of Justice knew about government records at Mr Trump’s home before the search.

The Justice Department said it was concerned that papers being held at Mar-a-Lago could compromise “clandestine human sources” in intelligence gathering.

The unidentified FBI agent who signed the affidavit also said there were documents bearing Mr Trump’s handwriting among the boxes.

The agent wrote that counsel for the Justice Department sent an 8 June letter to Mr Trump’s lawyer to inform them that Mar-a-Lago “does not include a secure location authorized for the storage of classified information” and asked them to secure the room where the boxes of documents were being stored.

The next day, Mr Trump’s attorney replied to acknowledge the receipt of the letter.

In a memorandum in support of keeping the extensive redactions to the document intact, the Justice Department said it was necessary to shield details in the affidavit from public view to protect “multiple civilian witnesses whose information was included throughout the affidavit”.

The government revealed that it had obtained information from a “broad range of civilian witnesses” whose identities needed to be protected because they may be subject to retaliation or intimidation or harassment from Mr Trump’s supporters, including threats against their lives or safety.

“FBI agents who have been publicly identified in connection with this investigation have received repeated threats of violence from members of the public. Exposure of witnesses’ identities would likely erode their trust in the government’s investigation, and it would almost certainly chill other potential witnesses from coming forward in this investigation and others,” prosecutors wrote.

Prosecutors added that the government has “well-founded concerns that steps may be taken to frustrate or otherwise interfere with this investigation” if too much information about their investigative strategy were to become known.

Mr Trump reacted to the release of the affidavit with a furious post on his Truth Social platform: “Affidavit heavily redacted!!! Nothing mentioned on “Nuclear,” a total public relations subterfuge by the FBI & DOJ, or our close working relationship regarding document turnover – WE GAVE THEM MUCH. Judge Bruce Reinhart should NEVER have allowed the Break-In of my home. He recused himself two months ago from one of my cases based on his animosity and hatred of your favorite President, me. What changed? Why hasn’t he recused himself on this case? Obama must be very proud of him right now!”

Judge Reinhart ordered the Justice Department to provide the redacted affidavit after a coalition of news organisations and a conservative group argued that the intense public interest in the search of an ex-president’s home justified the release, though prosecutors successfully convinced him to allow them to black out sections of the document that could reveal “the identities of witnesses, law enforcement agents, and uncharged parties” or “strategy, direction, scope, sources, and methods” relating to the ongoing probe into how highly classified documents ended up in Mr Trump’s possession past his time in office.

He also directed the department to add redactions to protect grand jury information that is required to be shielded under the Federal Rules of Criminal Procedure.

Notably, Mr Trump did not join the request and took no position on whether the affidavit should be unsealed in whole or in part, though the ex-president and his attorneys have called for the identities of witness to be made public. The former president’s camp previously leaked an unredacted copy of the search warrant and receipt his attorneys recieved after the FBI search bearing the names of several FBI agents involved, leading several Trump allies to post purported personal details for the agents on social media.

In a Monday order directing the department so submit proposed redactions, the magistrate judge said concerns about potential witness intimidation “are not hypothetical in this case,” citing the deluge of threats FBI agents and officials have received since Mr Trump announced that his property had been searched.

“Given the public notoriety and controversy about this search, it is likely that even witnesses who are not expressly named in the Affidavit would be quickly and broadly identified over social media and other communication channels, which could lead to them being harassed and intimidated,” he wrote.

The search of Mr Trump’s property was the latest chapter in what has been revealed to be a long-running dispute over the ex-president’s retention of documents from his former administration.

FBI agents under supervision of prosecutors from the Justice Department’s counterintelligence and export control section swore out the affidavit when they applied for the warrant to search the ex-president’s home and office on 5 August.

In a press conference several days after the search, Attorney General Merrick Garland said he “personally” signed off on the decision to seek a warrant, which came after a breakdown in talks between his attorneys, the department and officials with the National Archives and Records Administration over federal records Mr Trump took from the White House when he left office on 20 January 2021.

According to a May 2021 letter reported on by the Washington Post, Nara chief counsel Gary Stern, Mr Trump collected roughly 24 boxes of documents — official presidential records which by law are property of the US government — in the White House residence over the course of his term.

Mr Stern wrote that the boxes in question had “not been transferred to NARA” when Mr Trump left office despite a determination by then-White House counsel Pat Cipollone that the documents Mr Trump had assembled belonged in the archives.

The missing records, which Mr Trump had shipped to his home at Mar-a-Lago — the Palm Beach mansion turned private club where he maintains his primary residence and government-funded post-presidential office — became the subject of long-running negotiations between the ex-president and the government he once led.

Mr Trump eventually agreed to turn over approximately 15 boxes of records to Nara in January 2022, a full year after his term in office ended along with his legal ability to possess any presidential records.

But the transfer of those 15 boxes brought about yet more unresolved questions after Nara officials discovered that many of the papers contained within them bore markings indicating that they were high classified, with some records being so sensitive that they are normally stored and handled within specialised rooms built to government security specifications known as Sensitive Compartmented Information Facilities.

In February 2022, Nara officials informed the Department of Justice that it had recovered classified documents among the boxes retrieved from Mr Trump. The department then opened an investigation and asked Nara for access to the boxes so FBI and Intelligence Community officials could conduct a review of the documents.

The agent wrote that this development was “of most significant concern” to Nara.

According to a May 2022 letter from Acting Archivist of the United States Debra Wall to Trump attorney Evan Corcoran, the White House Counsel’s Office asked Nara to provide the FBI access to the boxes. Under the Presidential Records Act, the incumbent president must give his assent for anyone to have access to presidential records from a recently departed administration, and must also consult with the former president whose records are to be accessed..

The May 2022 letter, which was made public by a conservative journalist who is also one of Mr Trump’s official representatives to Nara, shows that Mr Trump’s attorneys resisted giving their assent to the FBI review of the documents. They attempted to invoke executive privilege — a legal doctrine which shields deliberations between and among a president and his advisers — to keep the FBI from viewing the records.

But Ms Wall, citing advice from the Justice Department’s Office of Legal Counsel, said there was no basis for Mr Trump to block the FBI from viewing the documents using executive privilege because the FBI is part of the executive branch.

“The question in this case is not a close one,” she wrote. “The Executive Branch here is seeking access to records belonging to, and in the custody of, the Federal Government itself, not only in order to investigate whether those records were handled in an unlawful manner but also, as the National Security Division explained, to ‘conduct an assessment of the potential damage resulting from the apparent manner in which these materials were stored and transported and take any necessary remedial steps’”.

The next month, a group of Justice Department officials — including the head of the department’s counterintelligence branch — visited Mar-a-Lago in hopes of convincing Mr Trump to return more of the documents, which he was storing in a room on the first floor of Mar-a-Lago.

One department official later emailed Mr Trump’s attorneys asking them to add an additional lock to the facility, but within a few weeks the department applied for the warrant to search Mr Trump’s home.

The warrant authorised them to seize “all physical documents and records constituting evidence, contraband, fruits of crime, or other items illegally possessed” in violation of several sections of the US criminal code dealing with unlawful possession of national defence information and obstruction of justice.

It also directed agents to take possession of “physical documents with classification markings, along with any containers/boxes (including any other contents) in which such documents are located” and information “regarding the retrieval, storage, or transmission of national defence information or classified material,” along with any records created during Mr Trump’s term and “evidence of the knowing alteration, destruction, or concealment of any government and/or Presidential Records, or of any documents with classification markings”.