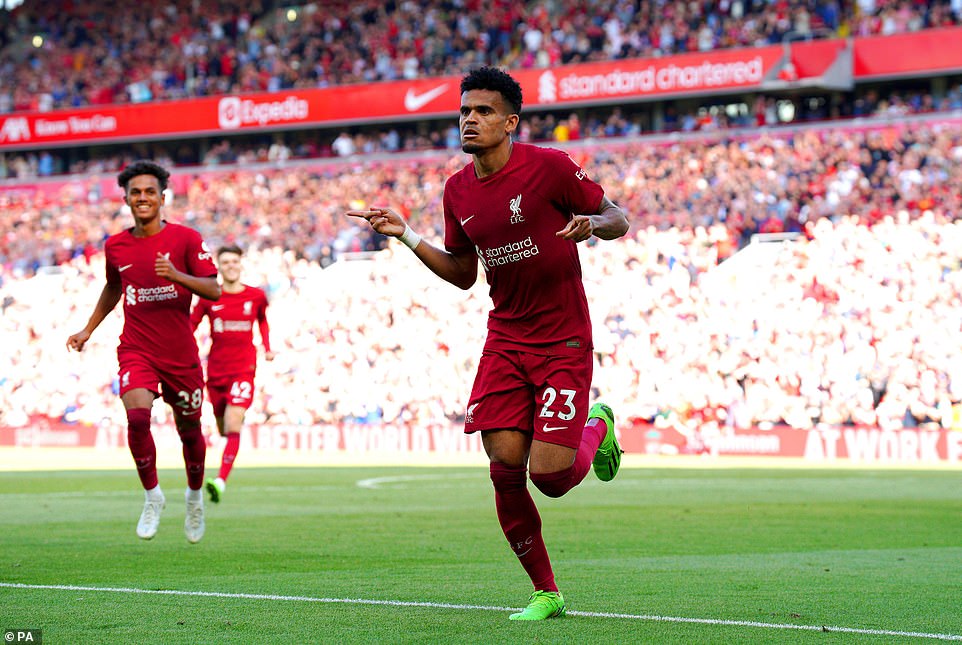 Roberto Firmino was wheeling away in delight, celebrating his deserved moment in the sun, when Scott Parker took a long, lingering look at the scoreboard.

At first glance, you might have assumed Bournemouth’s manager was working out how long he had left to inspire a comeback and, in normal circumstances, you would have been right. But, on a closer inspection, you could see Parker’s face was creased with dread and you knew he was clock watching.

With only 31 minutes played and the unplayable Firmino having just scored Liverpool’s fourth goal, Parker was clearly wondering how much more punishment Bournemouth were going to endure and what chance they had of keeping the score down. 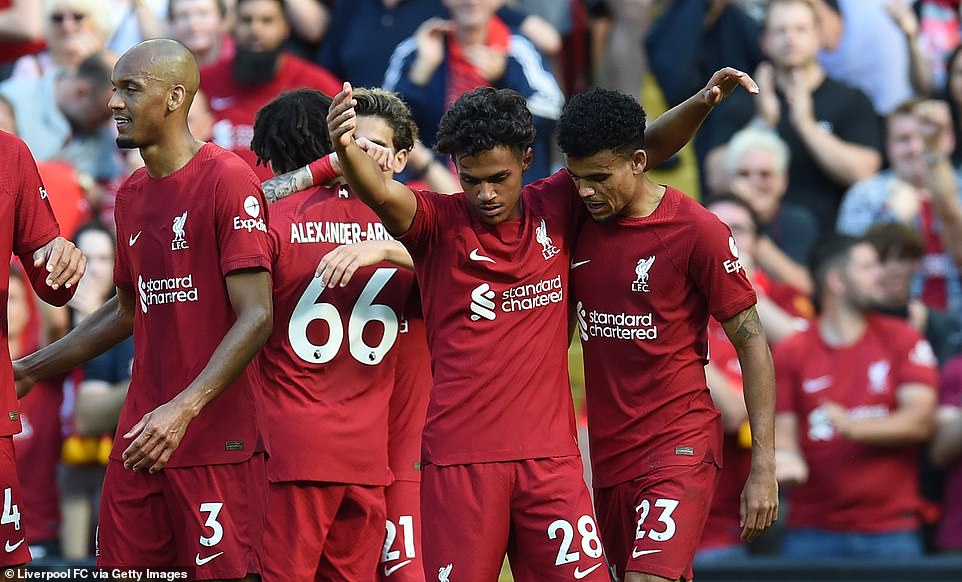 Liverpool were unstoppable, establishing a five-goal lead at half-time and continuing their relentless assault after the break 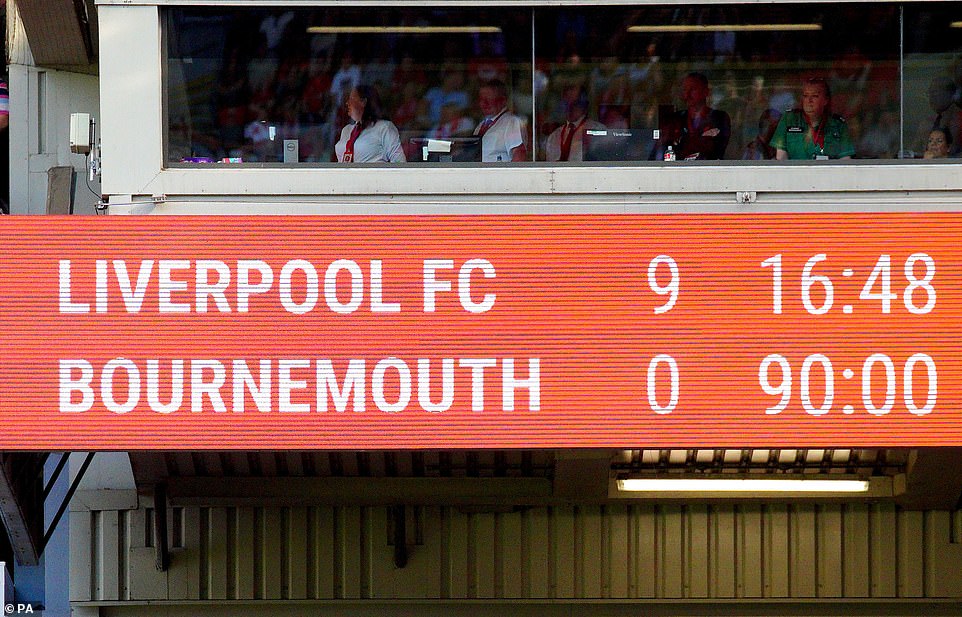 The answer to those questions were simply ‘lots’ and ‘none’ – Liverpool, after such a disjoined start to the campaign, were in no mood to waste any more time and it was Bournemouth’s grave misfortune that they encountered a team that had rediscovered its zest and fluency.

What Liverpool produced from there was quite remarkable, a day that had statisticians furiously thumbing through their notebooks to work out the implications of this avalanche of goals meant in the grand scheme of history.

In a nutshell, Liverpool equalled their biggest ever league win, matching the 9-0 thrashing they handed out to Crystal Palace in September 1989; they also matched the highest Premier League score achieved by Manchester United, Tottenham and Leicester.

More than anything, though, they took full advantage of a Bournemouth team that had come bearing gifts and gleefully accepted the opportunity to get a victory that will have done wonders for confidence and reminded critics of the folly in making snap judgements. 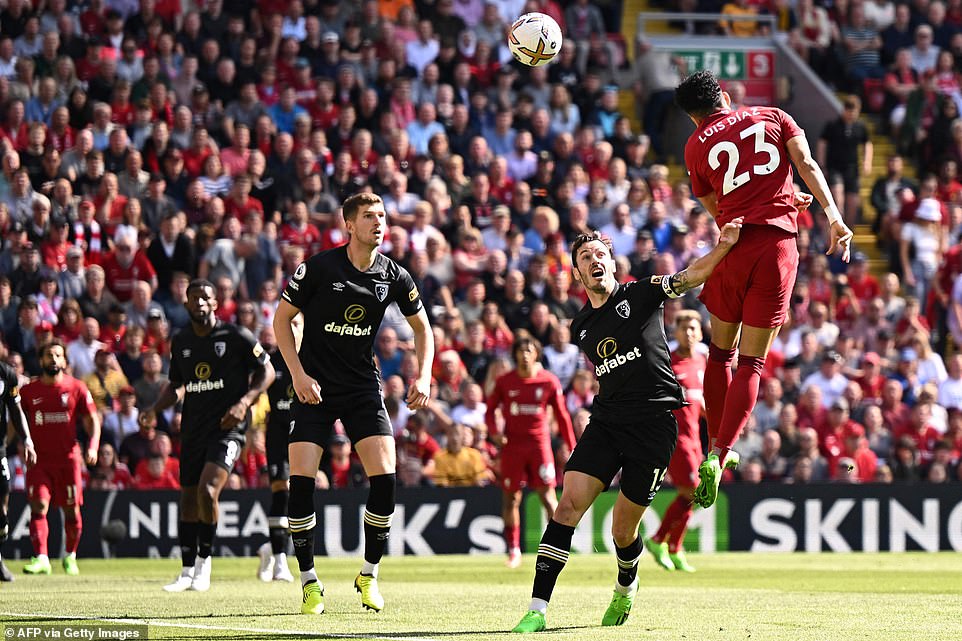 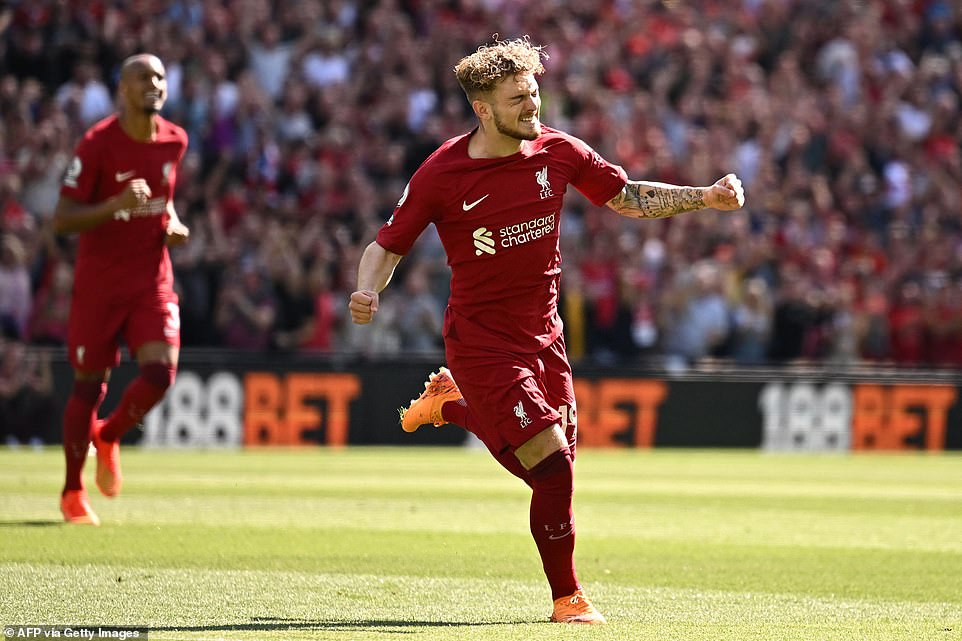 Afternoons do not come much more painful for those on the receiving end and poor Parker looked like he had lost all his worldly goods by the end but, conversely, afternoons do not get any better for a team than when it clicks so spectacularly, as it did for Liverpool.

You knew after six seconds when Luis Diaz hounded Bournemouth captain Adam Smith and forced a thrown in, leaving Jurgen Klopp clapping his hands enthusiastically, that Liverpool were in the mood and had heeded their manager’s request for them to become ‘the team nobody wants to play.’

Parker, instantly, would have known what Klopp meant. Before his side had even had the chance to attempt to become the eighth consecutive team to score first against Liverpool, they were playing catch up and braced for 90 minutes of unrelenting misery.

Having made the first pressure of the game, it felt appropriate that Diaz provided the first goal. It was a beauty, too, a bullet header from Firmino’s precise right wing cross; VAR was required to check its veracity but Diaz was played onside by Chris Mepham.

This would ordinarily be a juncture to speak about Diaz’s majesty but there is so much to cram in from here that it simply makes sense to provide an abridged version of the Colombian’s efforts – he was outstanding, a constant, scurrying menace who looked capable of scoring at any moment. 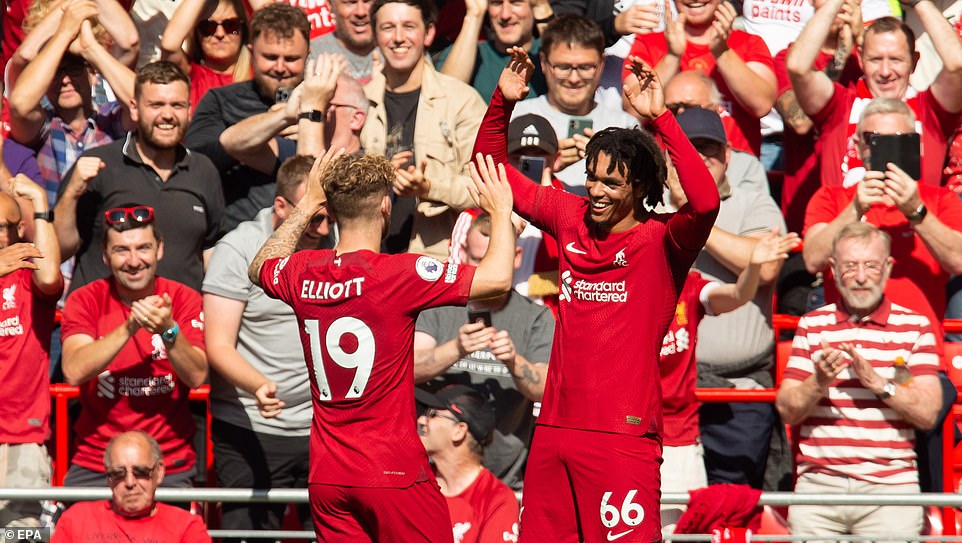 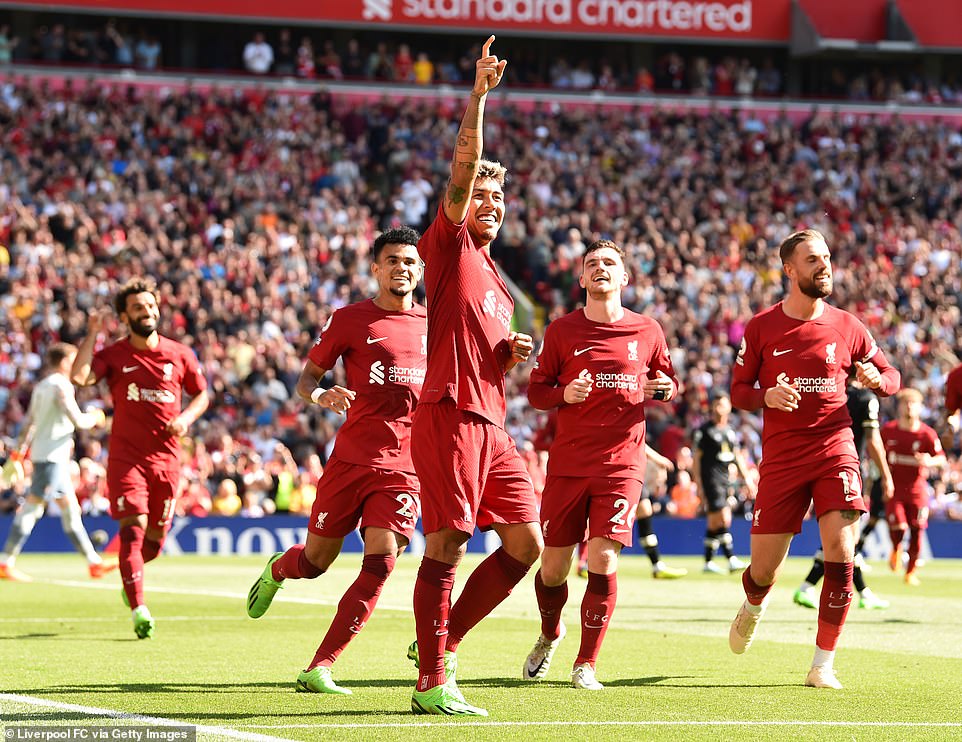 One quickly became two: Firmino was again involved, his attempt to control a pass from Trent Alexander-Arnold setting up Harvey Elliott to thrash a left-footed drive that went like an arrow past Mark Travers and nestled in the bottom corner.

Elliott’s father, Scott, celebrated by throwing his shirt into the air in the Main Stand and what a proud moment this was for him. His son is developing at a rate of knots and if Liverpool are going to buy a midfielder before the window closes, he will have to be good to dislodge this 19-year-old.

Even at this point, with just six minutes having elapsed, there was a distinct feeling that the contest was over but Liverpool were just getting started, spotting opportunities like a batsman spotting those dollies that demanded being smashed to the boundary as they drift down legside.

‘Smash’ was indeed the right word for Liverpool’s third, as Alexander-Arnold exchanged passes with Firmino and swept a 30-yard drive that sailed and dipped its way past Travers, gaining speed along the way. Alexander-Arnold walked off, smiling with utter contentment. He could not be blamed.

Then came the fourth, Firmino rifling in unmarked from six yards after a cross from Mo Salah dropped into his path. Incredibly, this was Firmino’s first Premier League goal at Anfield since December 2020 and how he enjoyed it. 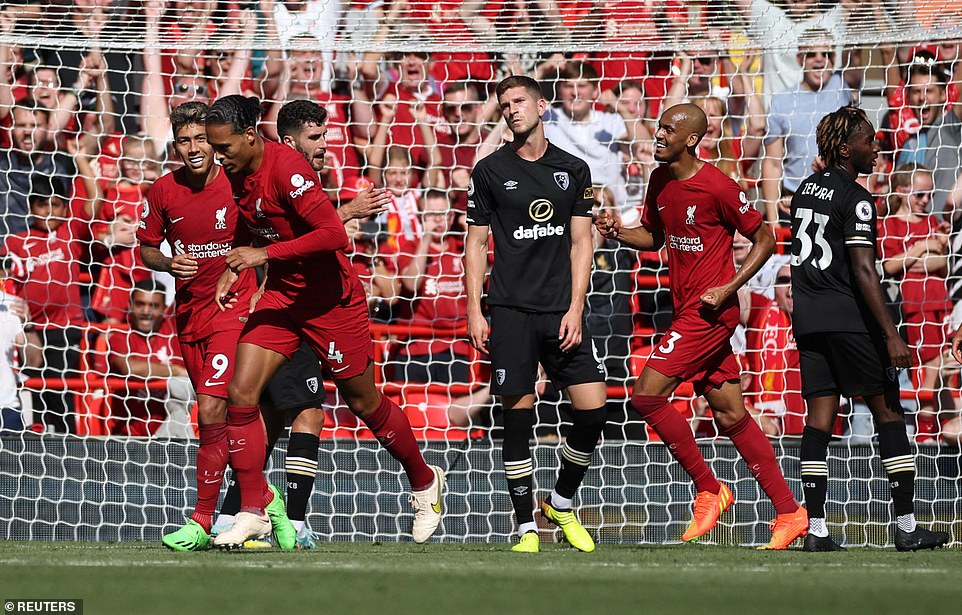 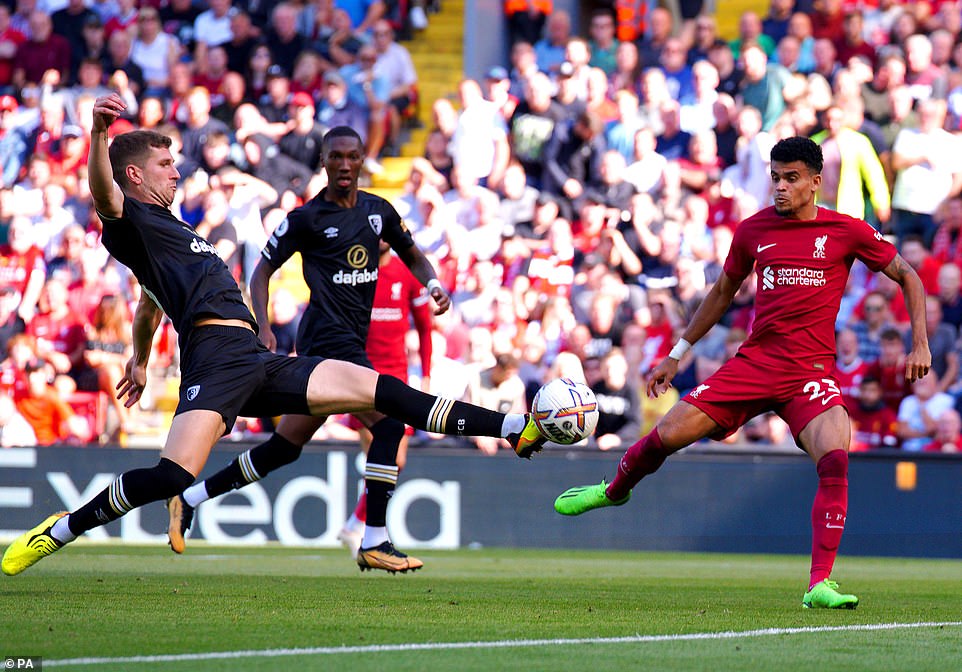 Parker, by contrast, was squirming. His teeth were grinding as Liverpool continued to cut through his porous defence and there was never any doubt that scoring would stop there; on the stroke of half-time, Liverpool got their fifth, Virgil van Dijk heading in Andy Robertson’s corner.

Now it was time for the history books to be consulted. The last time Liverpool had scored five before the break was in September 1958, when Phil Taylor was manager, and on that occasion, they failed to add anymore against Brighton at Anfield.

Here, there wasn’t any prospect that they would declare but Parker would have at least hoped would have expected Bournemouth to offer a bit more resistance than conceding the sixth in the first minute after the re-start, Mepham turning Alexander-Arnold’s cross into his own net. 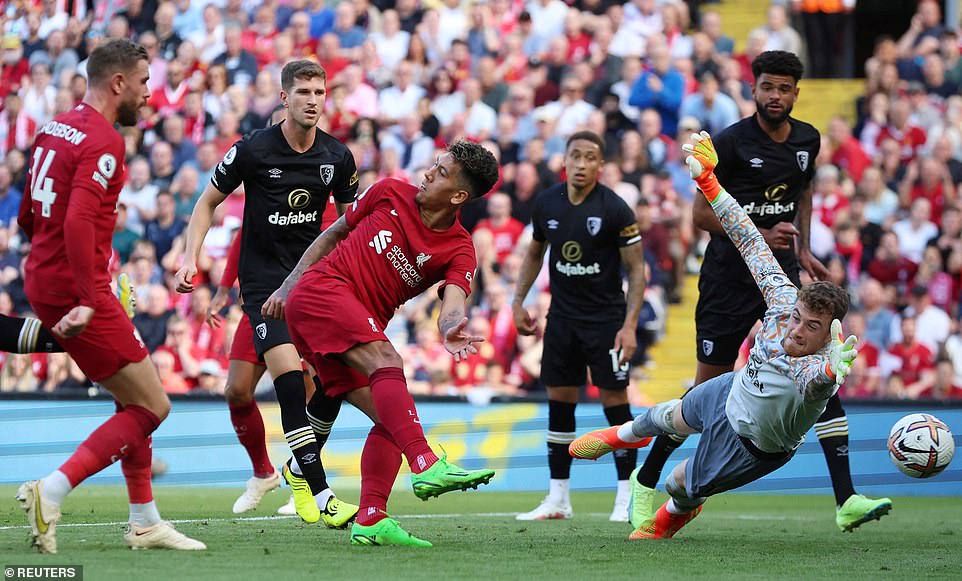 Roberto Firmino netted his second of the afternoon to make it seventh heaven for Liverpool – and didn’t even appear to look! 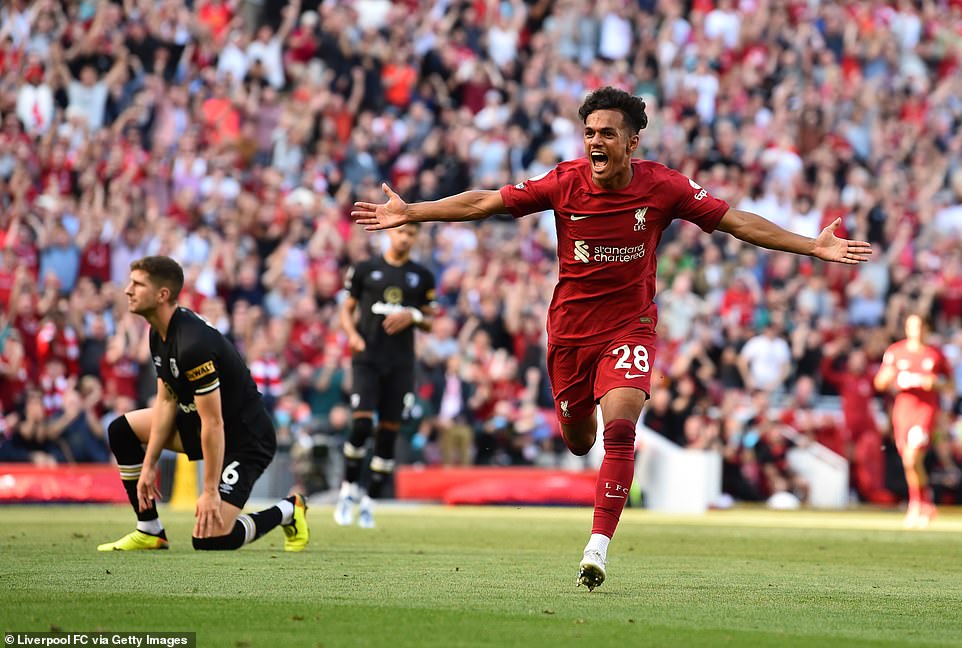 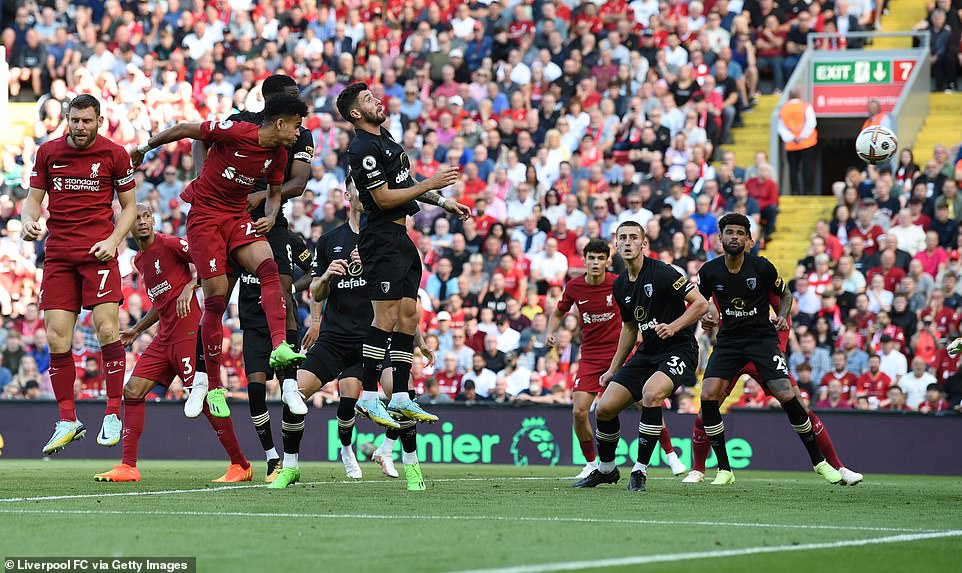 Still they were not done. Firmino made it seven on the hour, Fabio Carvalho – on as a substitute for Elliott – continued the bright start to his Liverpool career by lashing in the eighth on 80 minutes and Diaz equalled history in the 85th minute, arriving at the back post.

From there, the Kop began chanting ‘we want 10’ but it was to no avail. Really, it should have been and it was quite extraordinary that this pummelling took place without Salah, who missed two wonderful chances, getting in on the act.

No matter. Klopp was evidently thrilled at the final whistle, enjoying the celebrations, but Parker looked shell-shocked. He won’t forget this day in a hurry.