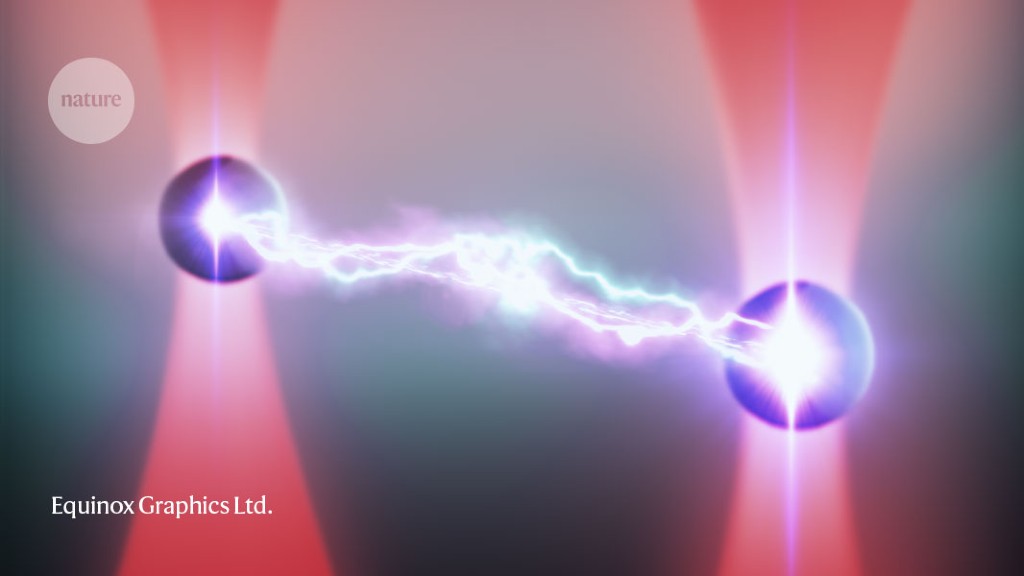 Physicists have suspended tiny glass spheres in a vacuum and made them interact with one another at close distance. The ‘levitating’ nanoparticles have now been manipulated with enough precision to open new ways of probing the enigmatic twilight zone between the everyday world and the counter-intuitive quantum physics that governs objects at the atomic scale.

“This is certainly an important milestone which opens up new opportunities,” says Romain Quidant, a physicist who conducts similar experiments at the Swiss Federal Institute of Technology (ETH) in Zurich. The results were published on 25 August in Science1. Levitating particles could one day act as a platform for quantum computing or pave the way for exquisitely sensitive measuring devices.

Over the past decade, physicists have mastered various techniques for manipulating objects the size of virus particles — a few hundred nanometres across — in a vacuum, in particular using the gentle pressure exerted by laser light.

In 2020, Uroš Delić at the University of Vienna and his collaborators stunned the physics community when they slowed particles’ centres of mass to what physicists call the quantum ground state, as if the particles were as cold as they could get2. Reaching the ground state is the first step towards accessing and manipulating quantum behaviour, which is normally obtained only at subatomic scales, and requires objects to be cooled to near absolute zero. Although their centres of mass were in the ground state, the particles continued to be otherwise warm, thermally vibrating and rotating on themselves.

Physicist Lia Li recalls the community’s excitement when University of Vienna physicist Markus Aspelmeyer, the senior author of that paper, reported the quantum ground state at a conference, and subsequently posted a preprint on the arXiv server. “People were frantic,” says Li, who is chief executive of engineering firm Zero Point Motion in Bristol, UK. A handful of laboratories scrambled to replicate the results — and some were successful.

Some physicists, including Giorgio Gratta at Stanford University in California, work with slightly larger particles — one micrometre across or more — that have enough mass to exert an appreciable gravitational pull. “The primary idea is to search for new interactions at the microscale, or for deviations from Newtonian gravity,” he says.

In the latest paper, Delić, Aspelmeyer and their collaborators made the first move towards juggling multiple levitated particles. They bounced a laser off a liquid-crystal panel inside a vacuum chamber, which split the beam into two. Next, they injected 200-nanometre-wide glass spheres into the chamber using an ultrasonic nebulizer, similar to devices used to treat asthma, until a nanosphere was caught in the focal point of each of the two laser beams.

This ‘optical levitation’ technique works because the rapid oscillations of the laser’s electric fields induce electric charges to appear equally rapidly at the opposite ends of each nanosphere, like the poles of a bar magnet. This polarization creates a force that pushes the particles towards the regions where the light is most intense — in this case, towards the laser beam’s focal point.

As the polarization quickly flips back and forth, it acts like the electric current inside an antenna that emits electromagnetic waves, explains co-author Benjamin Stickler, a theoretical physicist at the University of Duisburg-Essen in Duisburg, Germany. “Since you have accelerated charges, this emits radiation.” By adjusting the liquid-crystal panels, the researchers could bring the two focal points closer together. At distances of a few micrometres, the particles began to sense each other’s waves and the researchers could make them vibrate in unison, like masses connected by a series of springs.

Tuning the laser also allowed the team to turn off the force that one particle exerted on the other, without turning off the opposing force from the second particle. This produced ‘artificial’ laws of physics that seemed to violate Isaac Newton’s third law — that for each action, there is an equal and opposite reaction.

Stickler says that the next task will be to use the laser light to cool both particles to their quantum ground state. At that point, it could become possible to put the particles into a state of quantum entanglement, meaning that some of their measurable properties — in this case, their positions — are more strongly correlated than would be allowed by the laws of classical, non-quantum physics.

Entanglement is a hallmark of quantum behaviour, which is usually observed only at subatomic scales. Physicists have long debated whether macroscopic objects are governed by their own set of laws, or whether quantum effects are just too hard to observe at those scales. A number of experimental efforts are probing this question by demonstrating quantum behaviour at larger and larger scales. Last year, two teams independently put pairs of micrometre-scale drums in an entangled state — the first time that this had been done for macroscopic objects.

But researchers say that such ‘clamped’ objects pose limitations: they are physically connected to a device, which makes it hard to keep delicate quantum states from being disrupted. With this in mind, Peter Zoller, a theoretical physicist at the University of Innsbruck in Austria, and others first envisioned using levitated nanoparticles for quantum experiments in 20103—5. “You might even think about a nanoparticle being a small computer that you can control with laser light and move around,” says Zoller.

Another advantage of the levitation technique is that it should work just as well for trapping more than two particles, Stickler adds. Zoller agrees. “It’s immediately scalable to a much larger number,” he says.

When applied to individual atoms or ions, levitation and laser cooling have been “like a secret sauce in quantum computing”, says Zoller. The same could happen with nanoparticles.