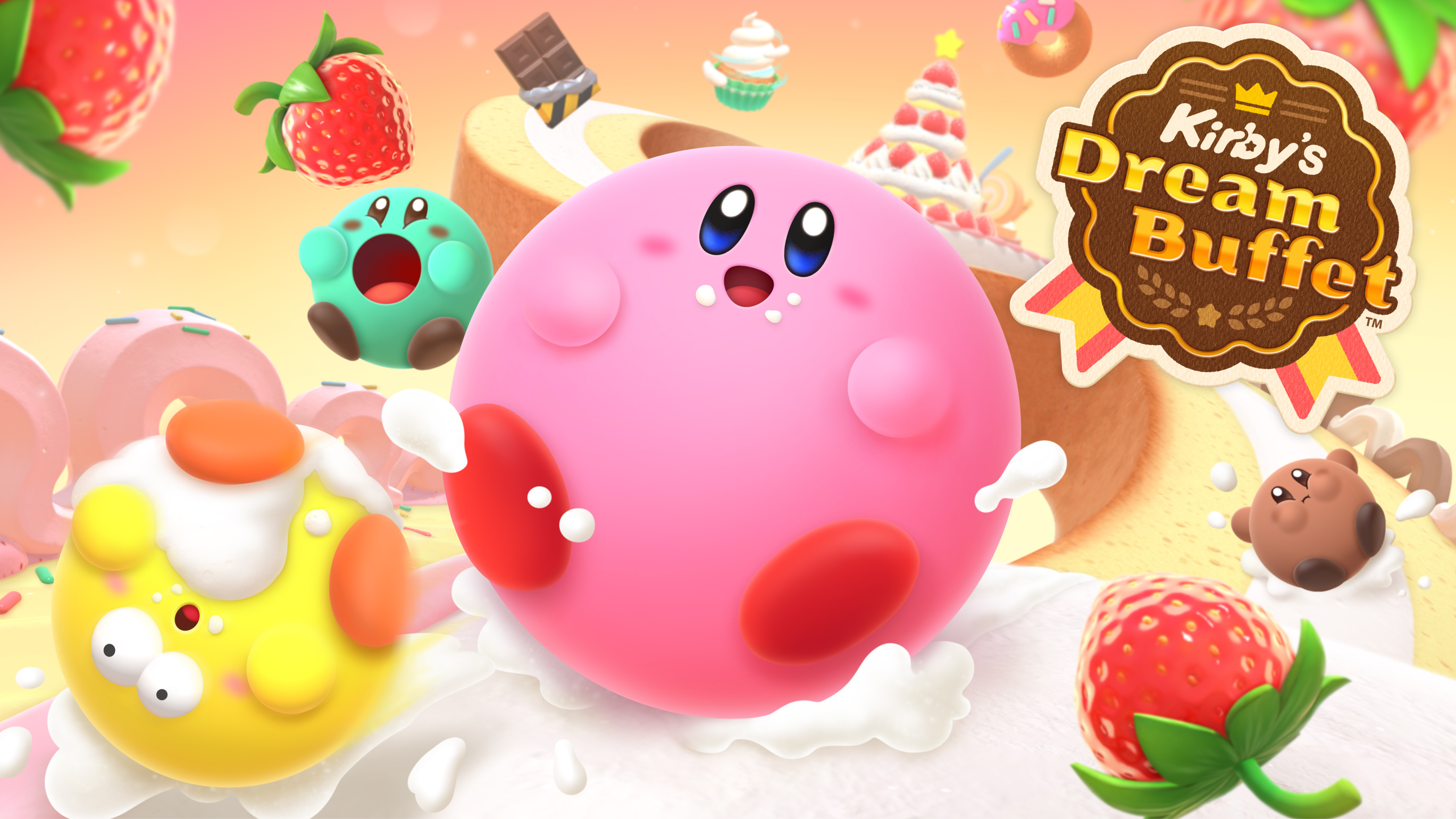 Kirby is one of the most instantly recognizable mascots in video games for many reasons. There’s his unique shape, his childlike innocence, and there’s also his bottomless appetite. It felt inevitable that Nintendo would return to Kirby’s insatiable hunger for a video game premise and what the publisher came up with was Kirby’s Dream Buffet. It’s a fun multiplayer party game, but one that doesn’t keep it going for very long.

Kirby’s Dream Buffet is the pink puffball’s foray into a Fall Guys-style battle royale and it’s something that mixes together a handful of ideas. Four players enter Grand Prix mode and advance through several stages. The two primary ones involve a simple race to the finish, where each Kirby must eat as many strawberries as possible. What’s interesting is that while the winner is ultimately determined by the number of strawberries consumed, eating a lot will also affect a Kirby’s weight and their overall speed. Larger Kirbys can roll faster, but lose their ability to hover and save themselves from precipitous falls. That levels the playing field a little bit, allowing players who have fallen behind more of a chance to catch up over the course of each Grand Prix.

Something else that gives players a chance to catch up is a multitude of Kirby copy abilities. Helpful power-ups like Tornado and Stone can be used over the course of each mode, which lets racers trip up anyone in the lead. Copy abiltiies also blend into other components of the Grand Prix, including random mini-games that feel like they’re pulled out of the Mario Party pile. To complement the main objective, these mini-games will center on the consumption of strawberries. However, it’s the last stage of every Grand Prix that I’ve noticed can change opinions on the whole game.

The last stage is a Smash Bros.-like battle royale free-for-all, where it’s every Kirby for themselves. Over my time with the game, I’ve seen Kirbys lose tremendous leads because they weren’t able to grasp the combat mechanics. While it’s possible to carry the same strategy of eating the falling fruits that fill the arena, it takes one player who’s fairly skilled at combat to make a Mario Party-like comeback and render the previous stages almost moot. Veteran players will likely grasp the concept, but the casual audience that I played with quickly grew irritated with that last stage.

Those who aren’t sold on Kirby’s Dream Buffet’s Grand Prix as a whole can play its individual components with four players. However, the game’s charm starts to wear thin after a few days, which is a shame, because this game has a Kirby-sized bowl of unlockables. Unlockables include different Kirby colors, cosmetic items, decorative items for the interactive main menu, music tracks, and much more. However, there are a whopping 135 Gourmet Ranks and it’s hard to imagine anybody sitting at this dinner table long enough to reach that point.

However, while the game’s appeal feels limited, it doesn’t feel like some of the other watered down Kirby experiences I’ve seen on the Switch, such as Kirby Fighters 2 or Super Kirby Clash. This feels much more like something that friends or a couple can take out on a Saturday night, crack open some ice cold beverages, and have a good time playing. If nothing else, the online component is solid and I’ve had some fun competing with virtual opponents, although it should be noted that this is also the only way to experience the game with four humans. Local play is restricted to two players, unless there’s a second Switch (with its own copy of the game) available, which is unfortunate.

Kirby’s Dream Buffet has been commonly compared to games like Fall Guys and it’s easy to see why, given that it’s centered on the idea of racing cute mascots across a sugary landscape in the name of wholesome competition. It ultimately feels a more limited take on that idea, but that doesn’t mean it isn’t fun. I had a good time with it for a while and it’s something I can see myself going back to in the future. I just won’t expect to get hooked on it, the same way I would a strawberry shortcake or a chocolate donut.

It’s not the best Kirby game out there, but it’s certainly better than I expected it to be. It doesn’t have the same staying power that a game like Mario Party or WarioWare does, but if nothing else, it’s a tasty appetizer.

This review is based on a Nintendo Switch digital code provided by the publisher. Kirby’s Dream Buffet is available now on Nintendo Switch for $14.99 USD. The game is rated E.

Ozzie has been playing video games since picking up his first NES controller at age 5. He has been into games ever since, only briefly stepping away during his college years. But he was pulled back in after spending years in QA circles for both THQ and Activision, mostly spending time helping to push forward the Guitar Hero series at its peak. Ozzie has become a big fan of platformers, puzzle games, shooters, and RPGs, just to name a few genres, but he’s also a huge sucker for anything with a good, compelling narrative behind it. Because what are video games if you can’t enjoy a good story with a fresh Cherry Coke?