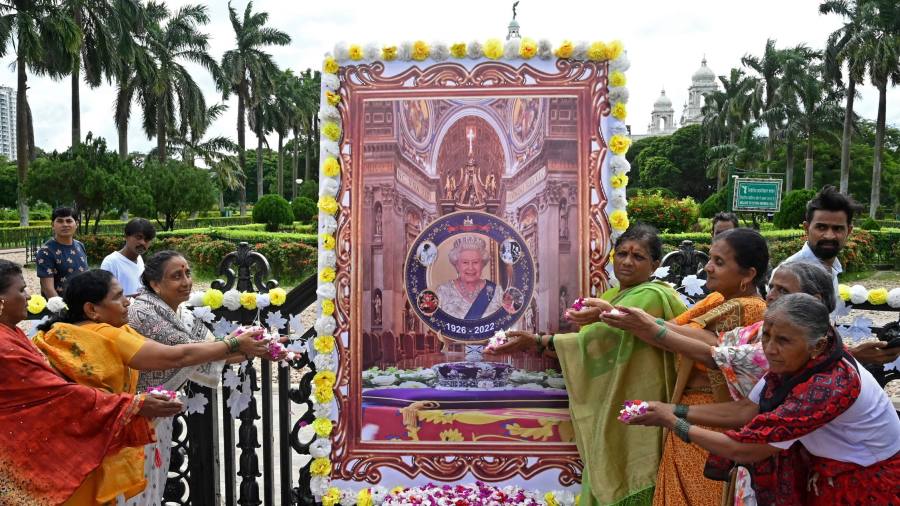 When Queen Elizabeth passed away earlier this month, the news made front pages and topped newscasts in India, before people quickly moved on to other things: the progress of the monsoon rains, talks on defusing a stand-off at the border with China, a political row over the siting of a semiconductor plant in Prime Minister Narendra Modi’s home state of Gujarat.

Indians have — by design, policy and the passage of time — moved well clear of the shadow of the British empire, even if many Britons still choose to see India through that prism.

“I have not seen any kind of emotional stirring, even in the English-speaking or middle class,” said Sushant Singh, a senior fellow at the Centre for Policy Research. “In fact, there has been a large degree of indifference in much of the population.”

For Modi’s ruling Bharatiya Janata party, actively shedding the trappings of the British Raj is part of a broader ideological project at the heart of its identitarian politics.

On the evening of September 8, as the Queen was breathing her last at Balmoral Castle, Modi was delivering a fiercely anti-colonial speech about how India was “leaving behind the past”.

On the same day, India rechristened Rajpath, formerly Kingsway — the avenue that bisects New Delhi’s British-built government quarter — Kartavya Path (“the Path of Duty”) as part of the country’s celebration of 75 years of independence from colonial rule.

“Kingsway or Rajpath, the symbol of slavery, has become a matter of history from today, has been erased forever,” Modi intoned. A statue of the Indian nationalist Netaji Subhas Chandra Bose was unveiled under the grand stone canopy opposite India Gate, where a statue of George V, the Queen’s grandfather, formerly was.

The timing of Modi’s remarks was purely coincidental. Modi later passed on condolences, speaking of the Queen’s “inspiring leadership” and her embodiment of “decency and dignity in public life”. India flew flags at half-mast over government buildings. And in what is arguably an even more powerful symbol, the country dispatched Droupadi Murmu, its new president and a representative of the country’s historically disadvantaged tribal (indigenous) minority, to represent it at Queen Elizabeth’s state funeral.

Since taking power in 2014, Modi has promoted a narrative of a new India that is Hindu in its culture, and free of the influences of both the Muslim Mughals who ran India for more than two centuries, and the British who followed. Changing names and symbols is part of this: the Indian Navy this month replaced its old ensign featuring the Cross of St George with a new one inspired by the seal of Chhatrapati Shivaji, the 17th-century Marathi ruler credited with building up an early navy.

This is the latest chapter in a decades-old decolonisation effort that saw George V removed from his pedestal in the 1960s, when the opposition Congress party was in power. (The statue was not discarded, but removed to Delhi’s Coronation Park, where it stands today.) But most Indians remarked on news of the Queen’s passing politely, if at all.

Notwithstanding Modi’s fiery rhetoric, it is striking to a newcomer in India how little residual anger most Indians hold about a colonial period some historians say stunted their country’s development and contributed to many of the problems it still grapples with.

No less than Shashi Tharoor, the author of the scathing revisionist history Inglorious Empire (a bestseller in India too under the title An Era of Darkness) last week signed a condolence book for the Queen at the British High Commission in New Delhi. His remarks praised her “self-abnegation, rectitude, and selfless devotion to duty”.

Indians have collectively absorbed their past and are, as Modi said, “filling new colours to the portrait of tomorrow” in which Britain matters less.

India recently outflanked it as the world’s fifth-largest economy. A UK-India trade agreement is under negotiation that Brexit Britain arguably needs more than India. If Indians are not especially stirred by the Queen’s passing, perhaps it should not be that much of a surprise.