Level Infinite and the folks behind Tower of Fantasy have a new expansion for its popular free-to-play MMORPG coming in the future that will add a new world to explore, as well as new enemies and World Bosses for players to face off against for those sweet rewards.

At Gamescom, Dot Esports, among others, was given a teaser of what’s to come in the game, including a first look at the game behind closed doors. But thanks to the folks at Tencent and Level Infinite, we can now share with you images of the new area along with a new World Boss fight, Rudolph, to get you geared up for its release.

The world of Vera is a mix of desert and cyberpunk areas that really contrast with each other. Players will be exploring a vast world full of mystery with plenty to find and unlock along the way. The team’s main inspiration for the area is sci-fi movies like Blade Runner and Ghosts of the Shell and you can see that vibe in some of the landscapes.

In the center of this desert area, though, is a floating shelter city that serves as the main hub where players will be able to meet up and converse. It’ll also be the perfect place to explore with friends. 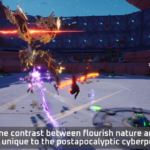 This contrast between technology and the desert is ever-present in the creatures of the world, including the area’s World Boss, Rudolph. This World Boss can be found in the desert far from the city and serves as a good example of what players can expect to face off in the new area.

His two attributes are Volt and Flame, with Rudolph letting out a high-frequency of lightning skills that will cause Rudolph to overheat and convert to Flame-based attacks.

If Rudolph overheats, that’s when it’s time to strike. The site around Rudolph is equipped with a cooling device that players can use to cool him down to normal temperature, back to a safe state to deal damage to him.

While there is a lot to look forward to about the upcoming expansion, including a release date, there will be plenty of action for players of Tower of Fantasy to enjoy when Vera becomes available.