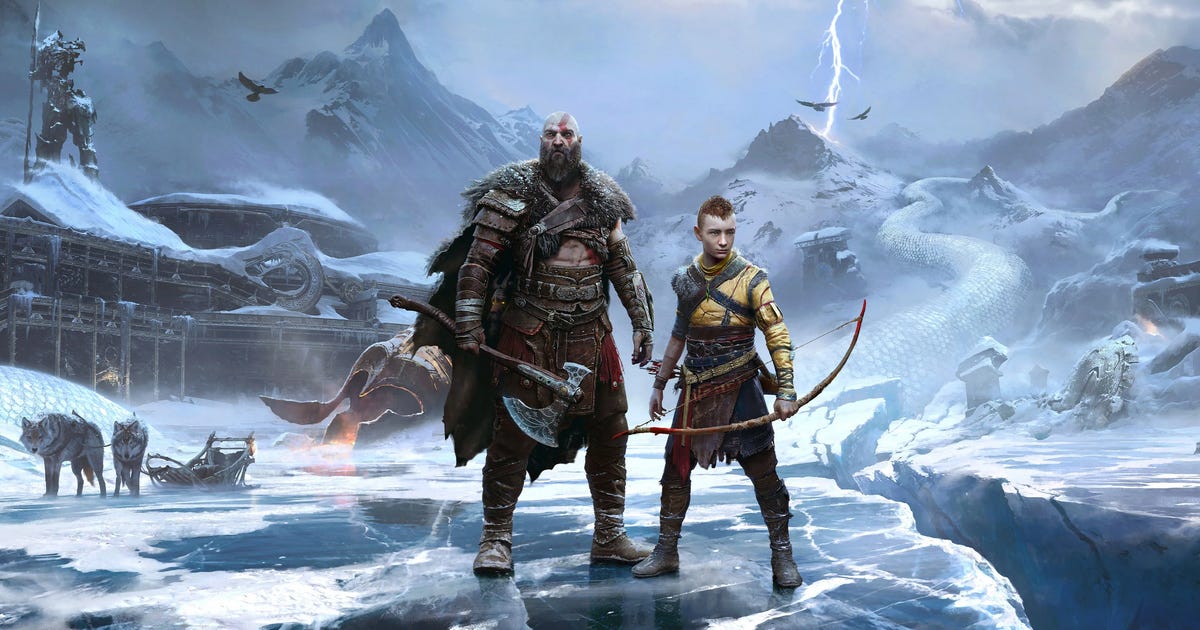 Elden Ring is one of the biggest games ever made, and that’s a great thing. It’s one of the only major blockbusters gamers have gotten to sink their teeth into so far this year. Alongside other notable titles like Horizon Forbidden West and Pokemon Legends: Arceus, however, Elden Ring launched in the first quarter of 2022. It’s been a dry few months since — but thankfully, that’s about to change.

The second half of 2022 has many offerings for gamers of all interests, whether it’s uber-long RPGs, online shooters or horror adventures that are your thing. There are an unfortunate few games, however, that were meant to hit shelves by the end of the year but which have been delayed. Starfield and Hogwarts Legacy are among them.

Here are all the gaming release dates of 2022 you need to know.

Saints Row is getting a reboot; the fifth game in the series will simply be known as Saints Row. It’ll have the same open-world sandbox that the series is known for — set in an approximation of the US’ southwest — but will strike a more serious tone than the wild and wacky Saints Row IV.

Lord of the Rings: Gollum

September is a big month for Lord of the Rings fans. Amazon Studios’ The Rings of Power series will launch, and then there’s Gollum. The unsightly rascal is the star of his own game, where he’ll use stealth to outmaneuver orcs — and occasionally overpower them — in his quest to retrieve The One Ring. We haven’t seen a deluge of footage yet, but the game is slated for a Sept. 1 launch on PlayStation and Xbox, followed by a Switch version on Nov. 30.

Last of Us Part 1 Remake

Last of Us Part 2 took Naughty Dog’s horror franchise into the stratosphere. It sold over 10 million copies, and recieved overwhelming critical acclaim. That’s renewed interest in the first Last of Us, which originally hit the PlayStation 3 in 2013. The Last of Us Part 1 is getting the remake treatment, with updated graphics and controls, plus integration of PS5 goodies like DualSense functionality and 3D Audio.

The Last of Us’ remake has gotten some blowback from gamers, who’ve called it an unnecessary money-grab — it’ll retail for $70, and comes after the game was already remastered for PS4. One of the game’s animators, Robert Morrison, rejected that criticism via a tweet. He called it “the most meticulously built and crafted project that I have ever seen or been a part of.”

Splatoon’s high concept is genius — and extremely Nintendo. It takes the traditionally violent first-person shooter and flips it on its head. You’re shooting paint, not bullets. You don’t score points for shooting enemies, you score points by shooting the environment itself. Splatoon 2 is one of the Nintendo Switch’s essential family fun games, though it soon may be usurped by Splatoon 3, which hits the Switch on Sept. 9.

Overwatch rules, we all know this. Overwatch 2 tweaks the format, making the squad-based shooter a 5v5 affair instead of the original’s 6v6. It also adds co-op gameplay, in case you want to shoot with your buds instead of against them. The biggest change is that you won’t have to pay to play Overwatch 2. Blizzard is shifting to a free-to-play model with battle passes and new content every season. Players will get a new hero or map every nine weeks, with the developers committing to updates in perpetuity. The hope is that the new model will combat the content drought that plagued the original.

Overwatch 2 launches on PlayStation 4 and 5, Xbox One, Xbox Series X and S, the Nintendo Switch and PC.

Mario + Rabbids: Kingdom Battle was a brilliant game, melding the two beloved franchises with surprisingly deep strategy gameplay. Sparks of Hope takes the cast of characters out of the Mushroom Kingdom and into outer space, though the scenery isn’t the only change. The game will add a heavier dose of combat into its strategy gameplay, as seen in a recent trailer, but hopefully will retain the charm that made the first one so lovable.

In a year filled with Gods of War and Calls of Duty, it’s nice to mix some new IP in. High on Life is a first-person shooter devised by Justin Roiland, the co-creator of Rick and Morty. The trailer makes the game look exactly like you might think: a quirky, colorful sci-fi adventure. High on Life is exclusive to Xbox, though it’ll be available on both Xbox One and Xbox Series X and S.

The Suicide Squad game was delayed until 2023, but DC fans aren’t completely out of luck. Batman is apparently dead in Gotham Knights, which means others need to fill the Caped Crusader’s shoes. With no Batman, you’ll play as Robin, Nightwing, Red Hood and Batgirl are in charge of protecting Gotham. This open-world RPG sees you play as all four chracters, each with different strengths and weaknesses, and encourages co-op play. It’s out on PlayStation 5, Xbox Series X|S and PC on Oct. 25.

It feels silly, at this point, to write a little blurb about what to expect from Call of Duty: Modern Warfare 2. It’s the 19th game in the illustrious franchise, and takes the series out of Vanguard’s World War 2 setting and sets it in… modern warfare.

Ragnarok is a followup to God of War, one of the PlayStation 4’s best games. There’s a lot going on in Ragnarok: The world is potentially ending, Kratos is seeking the Norse God of War, and a very angry Thor is hot on his track. It’s the second and final God of War set in Norse mythology and was originally meant to hit the PS4 and PS5 last year. It’ll be one of the year’s highlights if it can recapture the greatness of its predecessor.

Pokemon Legends: Arceus was clearly a pivot by Nintendo. It’s no surprise that the next Pokemon games, Scarlet and Violet, adopt the real-time action template of Legends: Arceus — but it is a big surprise that we’re getting the new Pokemon games so soon. Pokemon Scarlet and Violet hit the Nintendo Switch on Nov. 18, about 10 months after Legends: Arceus. We don’t know too much about the games yet, other than some sneak peeks into its starter and legendary Pokemon, but that’s nothing a surprise Nintendo Direct presentation can’t fix.

Final Fantasy 7: Rebirth is the long-awaited sequel to 2020’s Remake, and will hit the PlayStation 5 next winter. To give fans a little something while they wait, Square Enix is bringing out a remake of Crisis Core: Final Fantasy 7. Crisis Core, originally released for the PSP in 2007, is a prequel to Final Fantasy 7, and focuses on Zack Faire, a mentor to Cloud Strife. The remake is a big deal because Square Enix has been uncharacteristically coy about remastering the game, or porting it to any other platform. If you’ve wanted to play Crisis Core in the past 15 years, you needed to own a PSP. That’ll change with Crisis Core Reunion, which hits PlayStation 4 and 5, Xbox One, Xbox Series X and S, the Nintendo Switch and Windows late this year.

Many games that were promised for 2022 have been delayed to the next calendar year.

Hogwarts Legacy is an ambitious game. It’s open world, and set in 19th century Hogwarts, many years before the emergence of He Who Must Not Be Named and The Boy Who Lived. Harry Potter fans are understandably excited at the prospect of exploring a living, breathing Hogwarts, learning spells and taming magical beasts. Partially due to those high expectations, the game was delayed from its original 2021 release window — twice. It’s now set for a February, 2023 launch on Xbox and PlayStation consoles. A later release on the Switch is planned too.

Starfield was one of the most hyped games of the year. A new IP from Bethesda, creator of Fallout and The Elder Scrolls, it’s been described as “Skyrim in Space.” But ambitious games take time. Originally slated for a November release, Starfield is now scheduled to hit Xbox One, X and S, and PC in the first half of 2023.

Redfall is a team shooter from the company that brought you Dishonored and Deathloop. It’s centered around a zombie invasion of the town of Redfall, Massachusetts, and will be first-person, open world and best played with friends. The trailer hints at a game brimming with charm and character — but we’ll have to wait until 2023 to experience it properly.

In 2021 the Guardians of the Galaxy got to shine. This year was meant to be the Suicide Squad’s turn, but Kill the Justice League is now delayed until 2023.

Featuring the baddies from the recent flicks, including Harley Quinn, King Shark and Deadshot, you’ll act as a team to take down the Justice League. The most recent trailer saw the Suicide Squad’s attempt to neutralize The Flash. The dynamic combat looks extremely dope.

The Legend of Zelda: Breath of the Wild 2

It’s the sequel to one of the best games of all time, and Nintendo said it would come out in 2022. We all knew, deep down in our hearts, that might not happen. In March it was made official: Breath of the Wild 2 is a 2023 game.