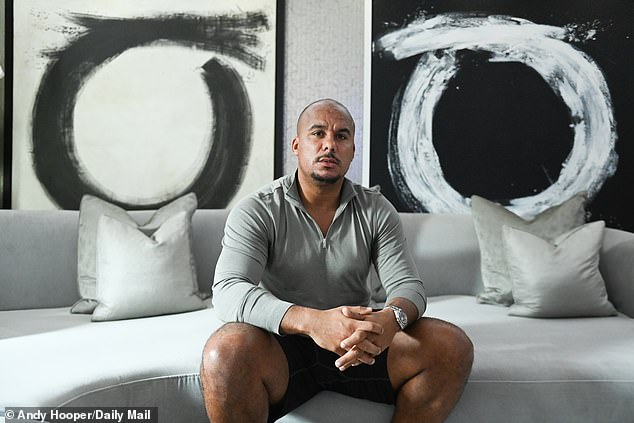 The moment Gabriel Agbonlahor knew the storm was a big one was when American news channel CNN said they wanted to get him on air.

‘The day it all happened CNN wanted to do a live Skype?’ Agbonlahor says.

‘I just thought: “What’s going on? Have I upset the president or something?”.’

Agbonlahor, once of Aston Villa and now of talkSPORT, had not upset the president of America. But he had riled the king of Liverpool, Jurgen Klopp. 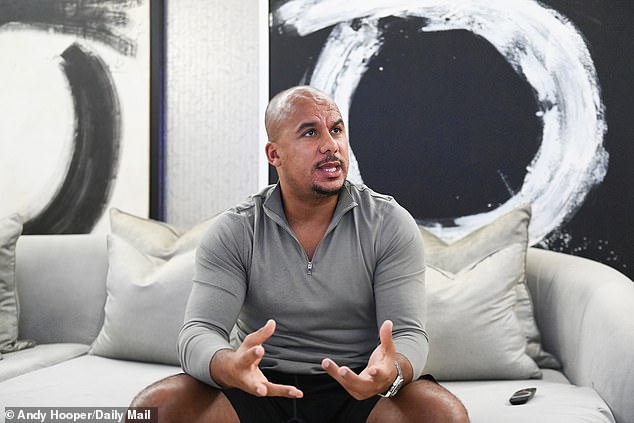 Now a host on talkSport, Agbonlahor has been overwhelmed on social media since Klopp singled him out for calling Man United ‘a shambles club’ 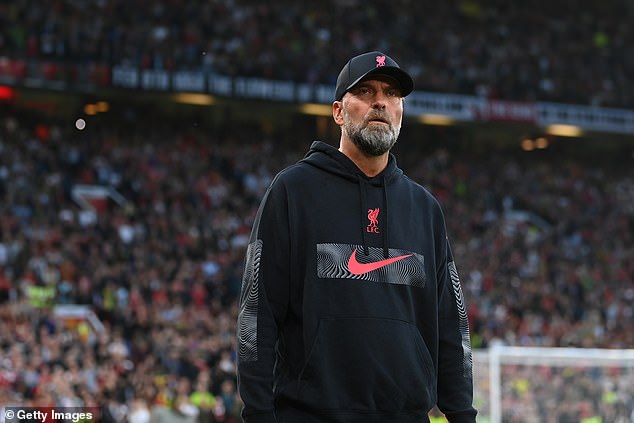 The Liverpool manager had heard Agbonlahor criticise Manchester United on his Saturday evening phone-in show after their 4-0 defeat at Brentford. Six days later, at a press conference to preview his own team’s visit to Old Trafford, Klopp let rip.

‘He lost against us 6-0 in my first season and I don’t remember him being a mentality monster on the pitch.

‘What he said on that show. I almost phoned in to tell him he has forgotten that he used to be a player. It was unbelievable.’ 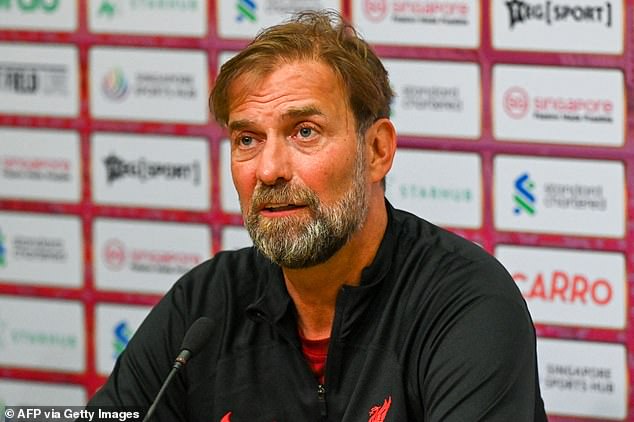 Six days on Agbonlahor sits on his sofa at his home outside Birmingham and reflects on ‘one of the weirdest weeks of my life’.

‘Every pundit, everyone in the pub, every girl talking to her mates, would say exactly the same things about Man United as I did,’ he tells Sportsmail.

‘So for Klopp to say that was a bit strange and to mention the 6-0 was even stranger. Why make it personal?

‘What should I have said? That Man Utd were “splendidly unlucky to lose 4-0?”. I just told the truth.’

Agbonlahor’s social media feed has been lively. Much of it abusive and from Merseyside. But the 35-year-old is unfazed, just confused.

‘Why was he defending Man United?’ he asks. 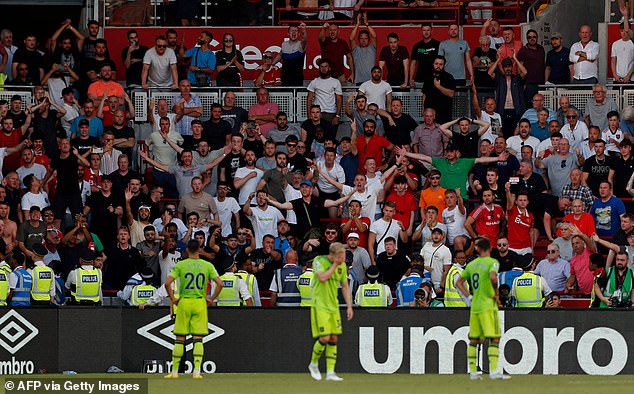 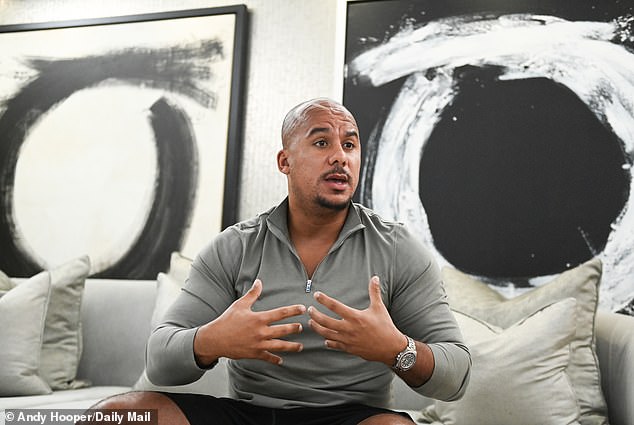 ‘And the whole “Gabby who?” thing. Him pretending not to know my surname. Why?

‘He has watched football. He will know my name.

‘And he is supposed to be the mentality monster king.’

Agbonlahor never thought he’d be having conversations like this. During his playing days at his one and only club, he thought he would finish at 35 and ‘spent the rest of my life on holiday’. He tried that and got bored and then a little lost.

He says: ‘I had no diary. No structure. I thought I was happy but I wasn’t.’

‘I thought I would be no good at it,’ he smiles.

‘And I thought my Birmingham accent would put people off.

‘At talkSPORT I have had to work myself up. They had seen my interviews as a player and thought “no energy”. They were right, too. I hated it as a player. 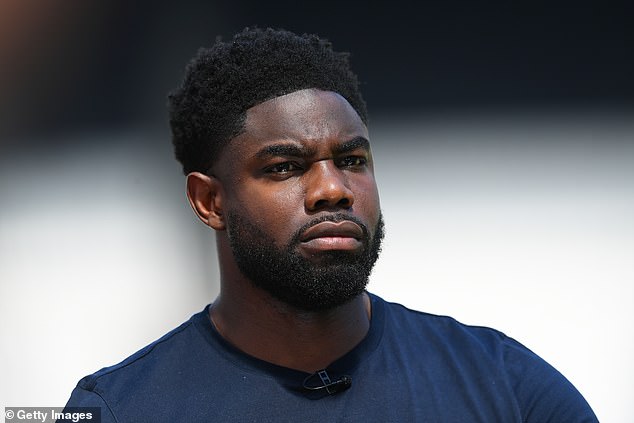 ‘I always wanted to get to London to party after a game. Too busy to speak to the media. It’s funny how life changes isn’t it?’

As we talk, the TV in Agbonlahor’s sitting room is showing football from America. He was never a great watcher of the game as a player. His former manager Martin O’Neill joked recently his star striker would not even know who Villa were playing that weekend.

‘But he had a point. Now I watch absolutely everything.

‘People like Klopp may think pundits just busk it and say things for the sake of it. If you do that you will get found out straight away.

‘So I watch games, I research signings, I watch clips of pre-season. I know my stuff.’

All of the above is doubtless true and Agonblahor’s stock on radio has risen. But it is his opinions that have got him noticed.

For example, I ask him about Roy Keane, once an assistant to Paul Lambert at Villa. Keane has been scathing of some of some unnamed Villa players’ attitudes in the past and it is widely thought Agbonlahor was in his sights. 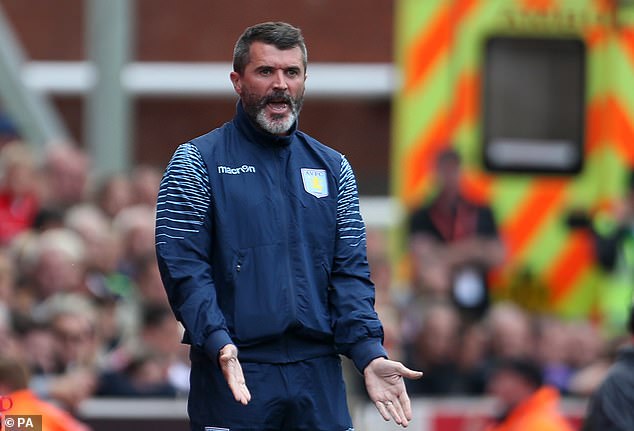 ‘I know it’s supposed to be me,’ Agbonlahor says.

‘He said I spoke to staff the wrong way and that really annoyed me.

‘I was the nicest person in the training ground. The staff will tell you that. I was the one making sure they got the right money at Christmas and everything.

‘We were excited when Roy came in. But his standards were so high that normal players couldn’t possibly reach them.

‘I hear him on Sky saying the same things he used to say to us. He would always scream in training. His ways were not for the modern player. He was an angry coach.

‘I told the gaffer it was too much so then Roy had me in. We had a bit in his office. 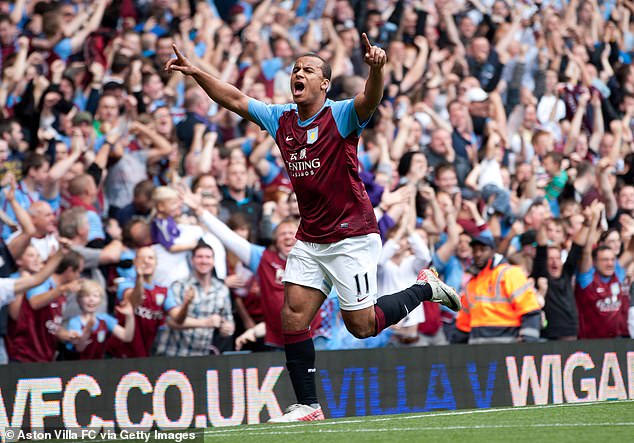 ‘Then one day the gaffer had us doing this slow, methodical drill. I told him we were all getting cold, having one shot every five minutes.

‘Roy reacted. “Oh you’re cold? You want another warm up?”.

‘He gave me that glare. He left the next day. I think he thought he was about to do something he would regret.’

Agbonlahor’s playing life began as a lightening quick 19-year-old and lasted 13 years. He played 341 league games for Villa and captained the club. He also played three times for England. 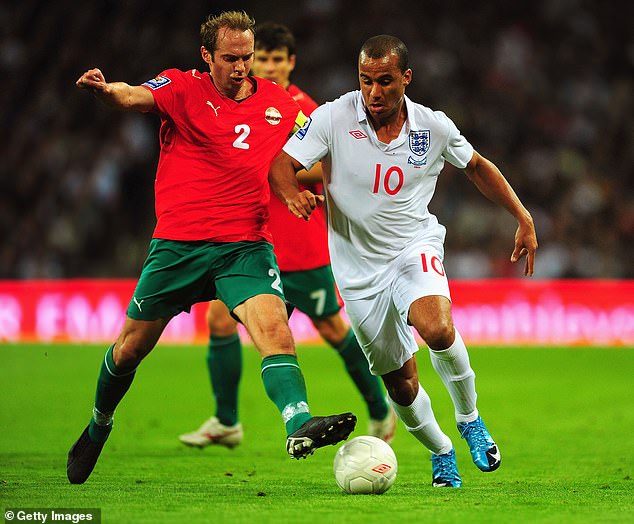 He also racked up three appearances for England, although he failed to score a goal 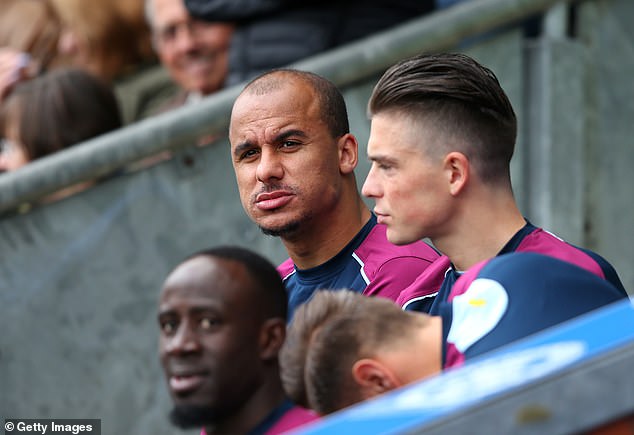 His career could have been better and he knows that.

‘I got too comfortable towards the end,’ he said.

It could also have lasted longer and he knows why it didn’t. But there are no regrets.

‘Had I not lived the party life would I have played longer?,’ he asks.

‘Of course I would. But I have lived the life I wanted.

‘At the time you are young and feel invincible. You play the game and then can’t wait to go clubbing and partying with girls.

‘At the time you don’t think it will affect you when you get older but it does. It ages your body.

‘But so many players were doing it. If you had seen the amount of players that were in Funky Buddah nightclub in Mayfair on a Tuesday night you wouldn’t have believed it.

‘It was common for Wednesdays to be a day off so you would go down and be in a hotel by 2pm. Massage, use the spa, dinner then straight to the club. Dancing on tables. 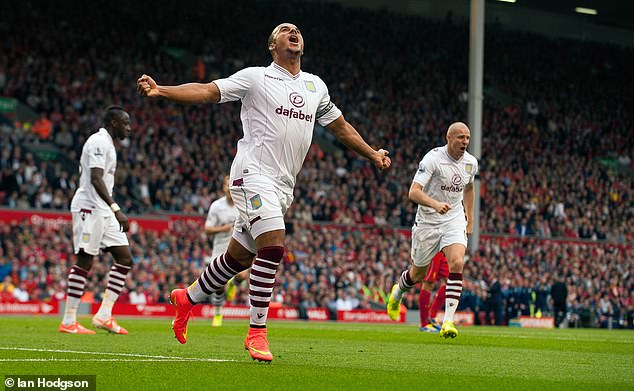 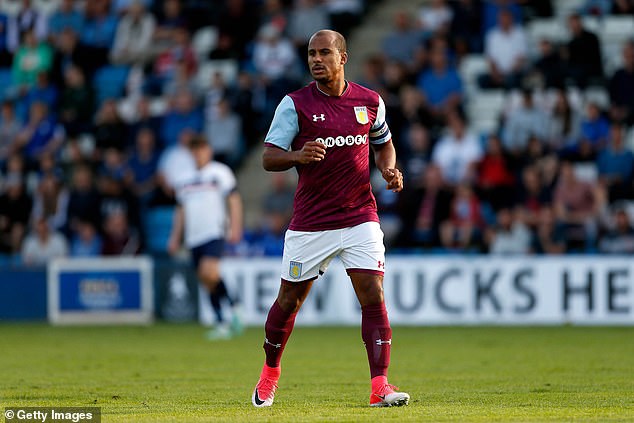 ‘I would train Thursday and feel great. Then play Saturday and go out again. London, Manchester or Newcastle.

‘If social media and camera phones had been around then I would have been going out in a wig and a disguise. But they weren’t.

‘So I just lived the perfect footballers life. I would come out of a club when it was light at 6am, not knowing where I was. ‘And the manager didn’t have a problem with that because we were performing on the pitch and winning games.

‘Now it’s about your weight, your body fat, your BMI. What are you eating? It’s a lot different now and that’s why all these players will play longer.

Agbonlahor considers himself strong enough to cope with the scrutiny that comes with a job in the sports media. ‘I have played Birmingham away,’ he smiles.

His background also helps. Born to Nigerian father Samson, his mother left the family when he was two and did not return.

‘I had two brothers and a sister but mum just went,’ Agbonlahor explains.

‘Then I had been in the Villa team three or four years and suddenly she did a piece in the Daily Mirror saying she wanted to meet me. 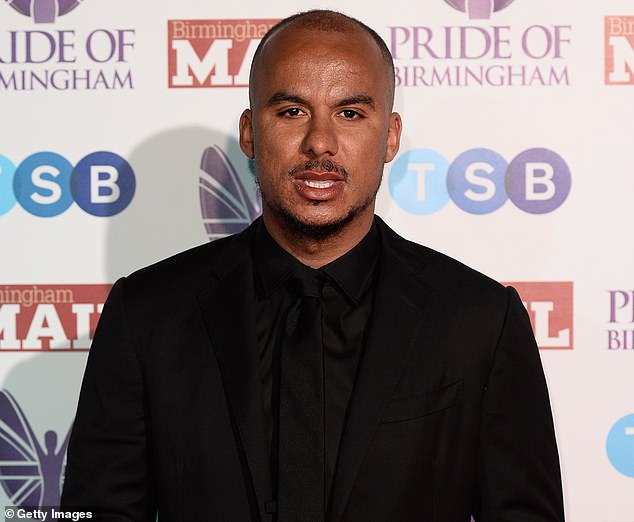 ‘Why didn’t she try and contact my siblings? Why choose the famous footballer in the family?

‘I had money and she wanted her cut. So I didn’t go near it.

‘My dad is a bright man. He has a PHD. I haven’t got his brains. But I have looked after him. He basically lives on the golf course now.

‘Him and my step mum did everything for us and they have reaped the benefits of me being a footballer.

‘My birth mother? Not so much. I call that karma.’

Agbonlahor, a father of four himself, is happy to still be close to the game he has fallen back in love with. He knows his current job comes with some drawbacks. He saw Arsenal defender Ben White in a restaurant not long after questioning his £50m transfer fee.

But he sees no other way to do it. So what if he bumps in to Klopp at some point? How would he expect that to go? 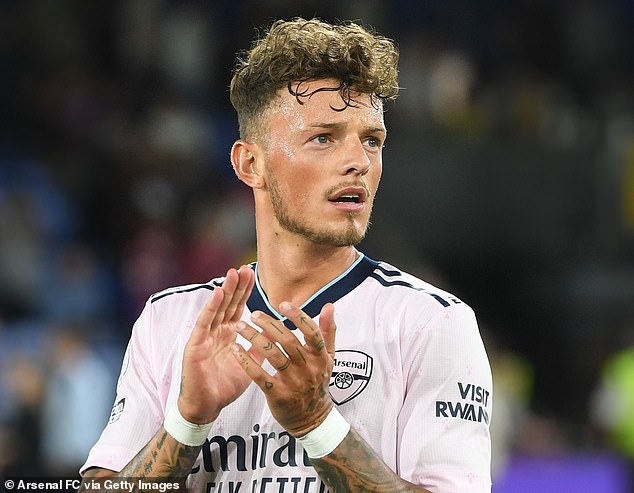 ‘I would just explain why I said what I said,’ he replies.

‘The great thing for us is that he was listening to the show!

‘And managers like Klopp have got to get used to it anyway.

‘What if Liverpool don’t win their next game? People will start aiming similar criticism at him.

‘What’s he going to do then? Is he gonna phone up Sky and have a go? Or call talkSPORT?

Call Gabby Agbonlahor and Jamie O’Hara on The GameDay phone-in from 5.30pm every Saturday on talkSPORT.