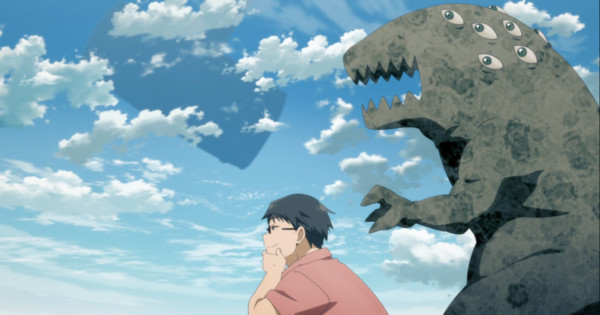 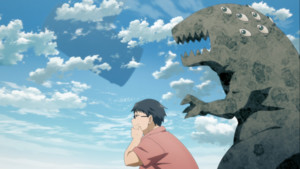 After I spent the last couple weeks trying to winnow out whatever info I could about our new characters, it seems Biscuit Hammer decided to answer my endeavors with a fire hose of character backstory. It’s almost like the show itself said “Oh, you think I spent too much time tossing all these assorted anime characters together without explaining their deal? Well how’s this treat ya, asshole?” It’s certainly disorienting to spend most of this cour grasping at straws about the bigger picture of the cast and plot, only to suddenly have three separate character backstories shotgunned into my gob in just 20 minutes. Not that I’m complaining. I’ll take too much over too little, and while it’s as rushed and haphazardly stitched together as previous outings, there’s some interesting ideas at play with our extended cast.

In order of increasing headiness, we’ll start with Yayoi. Hers is the shortest and simplest of our three vignettes, since we already have a basic grasp of her personality. She’s pretty straightforward, but I like that we get some details that don’t solely involve her reasons for joining this big magic battle for the world. We don’t necessarily need to know she’s a cosplayer and a fan of the same magical girl show Sami and Hangetsu watched, but it adds a bit of mundane humanity to her. She’s also got a pretty mature outlook on mortality – everyone’s gonna die eventually, so it’s important to make the most of the time you have, and strive to be as satisfied as possible with your life when it ends. That’s about as diametrically opposed as you can be from Sami and Yuuhi, which makes it funnier that the show is setting up a possible love triangle between them all. Good luck on that crush, girl, you’re gonna need it.

Then there’s Nagumo, who is both more complicated and a lot goofier, in good and bad ways. The bad is in how his particular story of a disillusioned police detective is articulated – namely the almost literally knife-licking, child-attacking slasher who gets protected by the police chief and inspires Nagumo to quit the force. It’s not that I don’t believe a corrupt cop would use his connections to cover up his dirtbag failson’s crimes – that’s easily the most realistic thing in this whole show – but it’s still embarrassingly clumsy to see the guy cackling about how he’s totally gonna kill a kid for no particular reason. Thankfully the rest of Nagumo’s story works better, and I appreciate the stone-faced weirdness that defines his personality. From the ongoing joke about him being stoically unemployed, to calling his wife “Mom” over the phone, to how he hurt himself trying to ride his beast knight familiar, there’s a strangeness to this gaunt old man that just smacks my funny bone. There are a lot of ways the story could take his desire to recapture his old ideals of justice, and I’m curious how that will develop, considering how things turned out for the last adult who couldn’t quite let go of his dreams of being a hero.

And then there’s Shimaki, who gets by far the wildest third of the episode. In about eight minutes, this guy’s personality somehow goes from “likes food, has cat” to “I want to learn the secrets of the universe and I’m willing to murder God to do it.” Damn. I really was not expecting that from this guy of all people, but I guess it’s always the quiet ones you have to look out for. It’s almost enough to eclipse that he’s apparently been having his own ethereal dream dates with Animus and even used his wish to emulate the wizard’s golem-creating powers. What’s most interesting though is that he’s staunchly against joining the bad guy’s side, even if it would mean unlocking the secrets of time and space. He is firmly and confidently ready to throw down with this pajama-wearing jackass, and even makes an attempt while in dream land. It’s about as fast and dramatic a shift in perspective as you can get for a single character, but by the end of it I genuinely wanted to see more of Shimaki. For as janky and condensed as the presentation is, it managed to hook me good.

Somehow that’s still not the end though, as this episode manages to pack in big reveals about both Animus and another one of the knights, not to mention a smattering of hints at other characters’ stories. It’s not clear what all of it means yet, especially in regards to Animus, but after months of slow rolling, I do appreciate us getting a concrete picture of the immediate stakes for our cast. While it’s marred by the show’s signature incoherent editing and highly inconsistent art quality, it’s again an episode that manages to work by letting the writing and comedy carry things.

Though on that note there’s like, five whole seconds of decent action animation at the end, when Shimaki summons his own golem and gets blocked by Akane. It’s not much, and I have no idea why it appeared here now, 33% of the way through the show, but I’ll take it. Certainly beats the alternative of the increasingly unsettling horse drawings.

Lucifer and the Biscuit Hammer is currently streaming on
Crunchyroll.