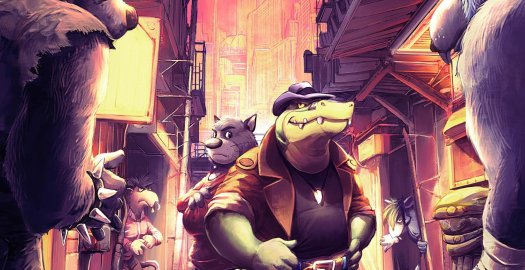 Combat in adventure games has been an extremely controversial subject since the very beginning of the genre. The debate has raged, making it a sort of “third rail” that many point-and-clicks try to avoid. BROK the InvestiGator says, “forget that noise!” and bursts full-on into what the advertising materials describe as “the first ever Punch & Click,” combining the classic beat-em-up (à la Double Dragon or The Simpsons Arcade Game) with a classic graphic adventure. Still high off their first hit: Demetrios – The BIG Cynical Adventure, and reaching their Kickstarter campaign funding goal in less than a day in January of 2021, French developer COWCAT must have been full of confidence to conduct such a bold experiment. And, folks, I’m here to say: They pulled it off.

The character you play for most of the game is Brok, the tough-but-sensitive alligator (or is he a crocodile?) detective, as he struggles to make ends meet while slowly unraveling the secrets of his dystopian world. You also play as his adopted son Graff, a cat who’s just trying to make his way through challenging academy trials while brushing multiple chips off his adolescent shoulder. The game’s primary focus is the relationship between the two as their goals begin to collide, and they become closer – or farther apart, depending on how you play. The two are engaged in a struggle to survive a dystopian post-apocalyptic world where the lower class and the upper class are divided by a hermetic dome, which leaves the “Slumers” on the outside to deal with a toxic atmosphere while the “Drumers” on the inside live in technology-enhanced luxury.

One couldn’t be blamed for feeling that the hard-boiled anthropomorphic animal detective trope may have been done to death recently. And similarly, BROK relies on cliches like memory loss, dystopian futures, a cyberpunk setting, and a tortured father/son relationship – all of which have had massive popularity spikes in the video game world in recent years. However, it’d be folly to write this entire story off as well-trodden ground. The relationships feel natural while playing, and the world is deeply realized, with many interwoven layers of history, conspiracy, and connection to unravel. While playing the game before release, I could already see the extensive Wikia erupting from the internet after launch.

Helped undoubtedly by its art style, the game feels like playing the movie version of a 1990s Saturday morning cartoon. The nostalgic DNA of the Teenage Mutant Ninja Turtles, A Goofy Movie, and TaleSpin is all over BROK the InvestiGator. The characters, all different animals or robots, are stuffed full of personality and brought to life with top-tier voice acting. At the end of the game, you feel as if you know each of the friends and foes you make throughout. The animation is pretty thin, which undercuts how beautiful the art looks. The backgrounds evoke some of the best cartoony adventure games of the past decade. While each character seems like it just stepped off a Disney animation cell, seeing the characters move brings the art down to a slightly more amateurish level. All cutscenes happen through extended dialogue in the game, with some static image panels interspersed to show action moments. The effect is perfectly serviceable for telling the story yet highlights how much the game would have benefited from some full-motion video animation.

The gameplay is almost bursting with new and old ideas, so no two hours of the play will feel exactly the same. You’re punching your way through an alley full of killer robots one moment, and the next you’re poring over every detail of a crime scene. In another, you’re digging up clues to connect in a classic “parlor scene” climax, and the next you’re engaging in an escape-the-room adventure with a timer ticking down while you crack codes and think outside the box to escape in time. There isn’t a dull moment in the 10-15 hours it’ll take you to beat the game – the first time! BROK also sports multiple paths and endings so that different choices offer you diverse moments and outcomes. Fair warning on this: I had to play the entire game two times all the way through (with countless “save-scummed” scene replays) to get an ending I was happy with. I will probably play a third and fourth time in pursuit of what the game calls the “canonical ending,” though many of the central puzzles and moments stay the same (at least in the first 75% of the game) so it can be wearying.

In a single review, it would be hard to describe all the various systems at play in this game, but the primary two are exactly what’s on the package: A point-and-click adventure and a beat-em-up action game. The first is classic and relatively straightforward. You have a single cursor which allows you to interact with objects in the scene. The cursor switches to a magnifying glass if all you can do is examine an object, a word balloon if it’s someone (or something) you can talk to, and Brok’s scaly green hand if you can interact. A right-click brings up your inventory. The space bar or center mouse button highlights and labels all interactable objects in the room. In the inventory screen, you can examine or combine objects. Phone mechanics also allow you to call characters you’ve interacted with or check text messages that may contain important information or story.

The beat-em-up side of things is also incredibly traditional. Every time you’re in a fight, you’re generally stuck on one screen, surrounded by enemies. The fighting is relatively bare-bones, as you have your standard attack, jump, block, and special all linked to various buttons on your controller. You can mix these to perform different combos and moves as you navigate up, down, left, and right around the screen. When you take significant damage, your special bar starts to increase, and you can unleash a powerful special move with the click of a button when it fills. The game also provides items that heal, boost defense and attack, or fill your special meter; though each takes a moment to consume and can result in frustratingly interrupted, intense moments. Defeated enemies yield experience points, plus money or items as rewards. Experience points work towards leveling your character up, allowing you to boost your attack, health, or special (although not defense, which might have been helpful). You can also use items in combat to wield as weapons or to throw, which can be helpful for some enemy types and certain puzzles.

If you noticed that I switched control schemes between paragraphs, you’re a keen investiGator [sic] yourself! This is one issue I had with the game. The point-and-click parts of the game work phenomenally well with a mouse and keyboard. Like any classic graphic adventure, you can explore a scene with your cursor. The added benefit of walking around using the arrow keys and menu navigation is pretty easy with either. The controller is a lot clumsier when playing these sections. Either you can use the right stick to (VERY SLOWLY) move a cursor around the screen, or you can walk with the left stick, and interactions are proximity-based. In other words, if you approach an object, it’ll highlight, and a button click allows you to interact. This can be difficult when your location needs to be precise or when multiple objects are close together.

On the other hand, the beat-em-up works very well with the controller. You can bob and weave around enemies with your joystick and whale on them to your heart’s content. The keyboard and mouse are also usable for these functions, but likewise are very clumsy. In all fairness, you can remap the keys to something you feel comfortable with, but I could never get the right set-up. As a result, I was playing with a mouse, keyboard, and controller, all sitting in front of me and switching back and forth like a madman – especially when the two play styles were interwoven.

The point-and-click puzzles come in a wide variety of both difficulty and style. There were segments that any seasoned adventure gamer will breeze through, yet others will keep them stumped and poring over each element, pushing their brain for a solution. And if you find yourself too stuck at any point, the option to just punch your way through always exists. The game allows for multiple solutions to most puzzles, using either brain or brawn. The brawn solutions often result in mixed outcomes or difficulties down the line, but ignoring either side completely will inevitably lead to trouble. Though you can complete the game without fighting or puzzle solving, achieving the best ending (or even a good ending!) without employing a healthy mix of both would be impossible. For adventure game purists, however, there is a mode that allows all combat to be skipped. For fighting game enthusiasts, a hardcore mode also exists, though it primarily just increases the health and damage of the characters you fight. Also, if you don’t want to sacrifice your play style yet are still struggling to complete puzzles, there is an in-game hint system that will provide detailed instructions, provided you can find the hint tokens (called “ads”) scattered around the environments.

This game is extraordinarily well-paced. As a player, you are called upon to flex so many different puzzle-solving muscles throughout the adventure that you’re never tired of any single section. Mini-games and logic puzzles dot the puzzle scape, providing a nice break from inventory puzzles. Many areas are punctuated by Ace Attorney-style “interrogations” where the evidence you’ve collected is combined to reveal surprising new conclusions. The game even provides side quests with additional puzzles and scavenger hunts, ensuring that there’s plenty to do on each new screen you encounter. And if you still find yourself stuck or tired of any scene, many chapters allow you to switch between Brok and Graff’s adventures, allowing you to control the pace as you see fit. You can work on one at a time until it’s finished, or you can flip back and forth between the two to add dynamic direction to your experience.

It’s hard to overstate how robust an experience BROK the InvestiGator is. With its many different types of gameplay, its dual characters, its half-dozen-plus endings, and just the sheer volume of writing, it’s about as complete as a game can be without ever being too much. The mixing of nostalgia for 90s-era Saturday morning cartoons, point-and-clicks, and beat-em-ups results in an alchemical concoction that feels new and fresh. Aside from some tropes and stiff animation, the game is a truly stunning achievement. While people who love fighting games might find the action underwhelming, BROK the InvestiGator is sure to punch its way directly into the hearts of adventure game fans looking for something extraordinary.

BROK the InvestiGator is available at:

We get a small commission from any game you buy through these links (except Steam).