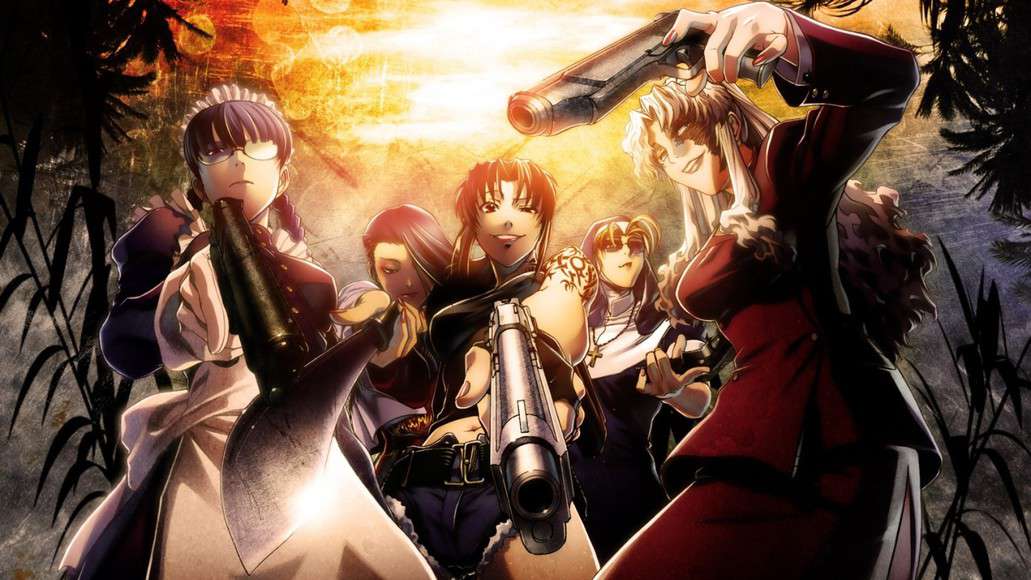 “Bring all the Bacardi you got”

Based on the ongoing, homonymous manga by Rei Hiroe that has sold over 8.5 million copies as of January 2022, “Black Lagoon” is one of the greatest action titles ever to come out of the anime industry, particularly due to its unique characters.

Buy This Title
on Amazon by clicking on the image below

When Okajima Rokuro, a salaryman, visits Southeast Asia carrying a top secret disk, he is kidnapped by pirates riding in a torpedo boat. Although he thought he would be rescued soon, the company actually abandons him, and sends mercenaries to retrieve the secret disk. He narrowly escapes with his life, but has nowhere to go. He gives up his name and past, and resolves to live as a member of the Black Lagoon, a team of pirate mercenaries who smuggle goods in and around the seas of Southeast Asia in the early to mid 1990s. The Lagoon Company consists of three members: Dutch, the leader; Revy, the main gunfighter; Benny, the mechanic, computer specialist, and researcher, and Rock, as he is soon nicknamed by Revy, becomes the fourth. Their base of operations is located in the fictional harbor city of Roanapur in east Thailand near the border of Cambodia, home to the Japanese yakuza, the Chinese triad, the Russian mafia, the Colombian cartel, the Italian mafia, a wide assortment of pickpockets, thugs, mercenaries, thieves, prostitutes, assassins, and gunmen. Black Lagoon retains a friendly relationship with Hotel Moscow, a group of Russian paratroopers run by the ruthless Balalaika.

The first part of the series focuses on various missions the group takes and their interactions with the aforementioned groups, while the second part mostly takes place in Japan, where Hotel Moscow becomes involved with the yakuza. The third part, which was presented in a 5-episode OVA, focuses on Roberta, one of the most interesting characters in the franchise, who appears as a maid but is actually a former guerilla who is employed as a bodyguard of the Lovelace family, eventually developing a loving relationship with the young son of the family, Garcia.

The most evident trait of the series is the action. Starting with the way Revy uses her twin guns, and continuing with a series of characters, a number of which are women, and the different weapons they foster, including a foul-mouthed Chinese with knives and a murder-cleaner with a chainsaw, the variety of “tools” and fighting style results in a plethora of action scenes that are truly memorable to watch. The one-on-one fights, mostly involving around Revy are also induced with an intense dramatic aspect, as the one between her and Roberta and the one between her and Ginji, Yukio’s bodyguard, in Japan are astonishing on occasion, with the quality remaining the same in the many group fights, even those who do not include the main protagonists. This variety, along with the rather interesting characters is what makes the series truly stand out in that regard, followed by the rather high standards of animation by Madhouse and the exquisite character design by Masanori Shino, who manages to present truly unique individuals, even despite their significant number.

Despite this obvious trait, though, the element that makes the series stand truly out is the character analysis and the interactions between both the main protagonists and the secondary ones. Rock’s role, for example, is a rather interesting one, as he tries to find a path for himself, or even better, open one, with each part of the anime resulting in a new direction for him. In the first, he realizes that he can no longer follow the path of light, in his case meaning being a loyal, hardworking, lawful salaryman. In the second, he realizes that his place is in the twilight, somewhere between the light of his past life and the dark of Roanapur, while in the last, he finally succumbs to the darkness before he finally opens a new kind of path towards the light.

Revy is an equally interesting character. With a rather horrendous past behind her, which is revealed in small flashbacks here and there, she is a true demon with a rather short temper and a gun ability to match it, but also a rather sensitive young woman, who is frequently thrown off balance when people confront her about her life and overall psychology. Her dark moods and the way they are shaped are among the best aspects of the series, as much as her relationship with Rock, with the moments she gets jealous of him, the ones she is shown as ready to die in order to protect him, and the moments where her only girlfriend, another mad dog who poses as a nun, mocks her for not having sex with him after so much time being rather enjoyable to watch. The dynamics of the two are also quite entertaining, with Revy having the upper hand in terms of power, but Rock in terms of feelings, particularly since she repeatedly tries to make him open up about his sentiments for her, since she cannot find the strength to express her own, and him “escaping” in a rather frustrating for her way. That these dynamics also involve a role reversal is also quite interesting.

At the same time, the level of analysis also extends to the secondary characters, the majority of which get at least one episode of their own, focusing on their past and the ways they ended up in Roanapur. Dutch’s nobleness and his fatherly attitude towards a crew that frequently act as kids, particularly Revy, and Benny’s nerdness come to direct contrast with some of their practices, but the ones that truly stand out here are the women. Balalaika, with her deformed face, high intelligence, and completely violent and ruthless nature is definitely one of the most interesting characters in the series, also due to her wavering “alliance” with Black Lagoon. Roberta is such a unique character, that the creators decided to give her her own arc, with her transformation, from a composed but murderous individual to a woman that has lost her grip with reality completely is true wonder to watch. The action scenes she is involved in are always great, with the fistfight with Revy and the only one she actually loses, to a point at least, being among the best in the whole franchise. Also of note is the character of Yukio, who emerges in the second part as a normal girl that finds herself having to become the head of a declining yakuza family. Her interactions with Rock, who seems to develop intense feelings for her, are an integral part to his arc, also because they also highlight Revy’s sentiments for him. That Yukio finally brings him face to face with his life choices is one of the most dramatic aspects of the series, in another testament to the excellent character analysis featured here.

Also of note is the whole concept of Roanapur, as a place filled with murderous outlaws, but also poor refugees from Vietnam, in a type of setting that is presented as the last resort for people who do not fit to any part of society. That all these different types of villains are placed in just a small island is an integral part of the narrative, as it shapes the progression of all the characters while retaining a constant sense of tension.

Add to all that a number of moments of humor, frequently resulting from Revy’s temper, and some elements of sensualism, again coming from Revy’s rather short jean-shorts and top, and her more “conventional” winter appearance in the Japan arc, as much as from the presence of sultry maids and nuns, and you have the backbone of a series that seems to have it all. This last element finds its apogee in the OVA (a common practice in the anime industry since OVA’s tend to be less “politically correct”), with Roberta’s subtle sex scene and Revy’s half nudity being rather memorable.

Not much more to say, “Black Lagoon” is one of the best anime titles of all times, and a must watch for every fan of action titles.