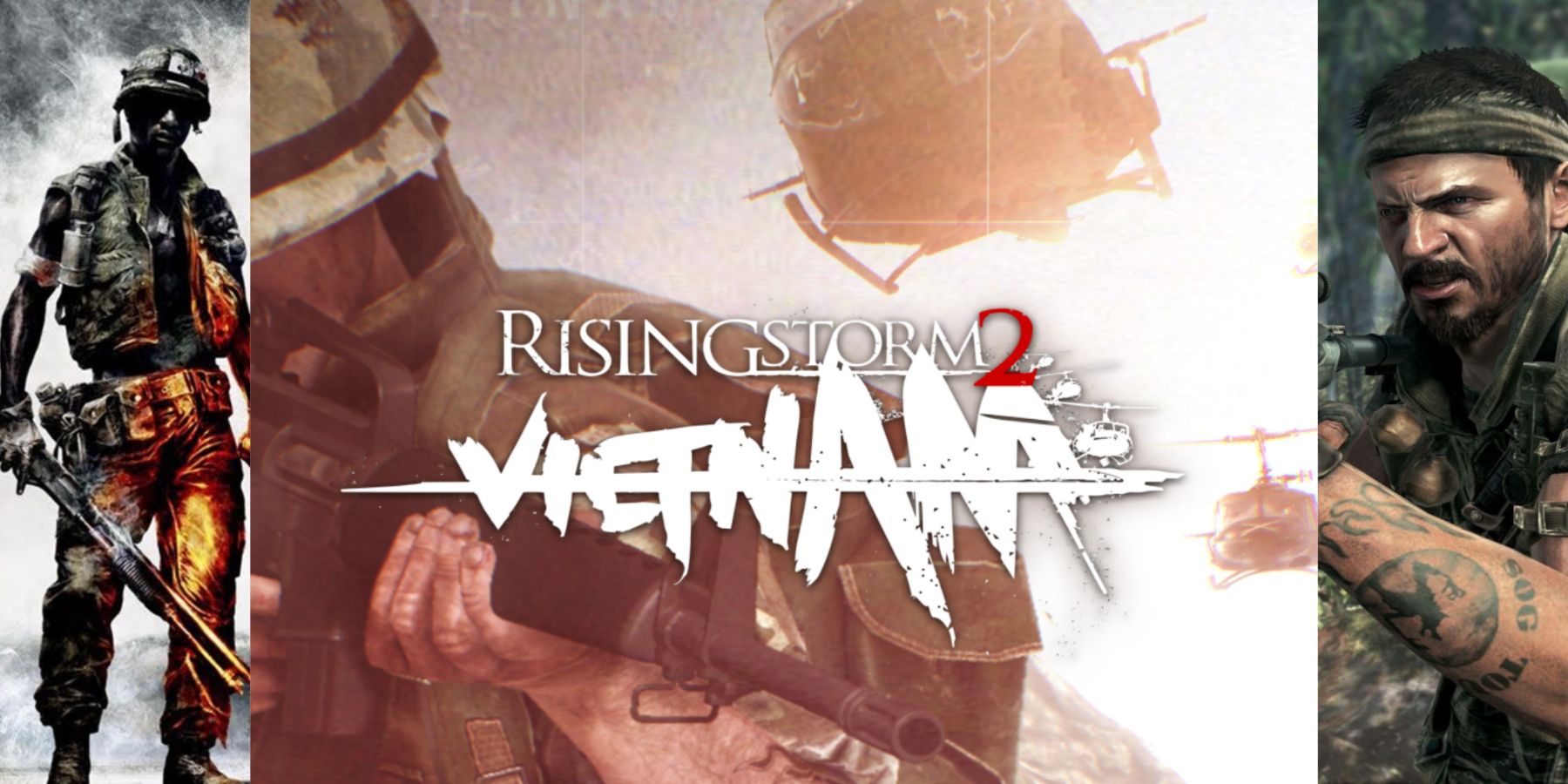 The Vietnam War hasn’t seen nearly as much representation in gaming as other major armed conflicts. To be clear, there are some very good reasons for this; the controversial motives behind the war on the Western side, the brutal nature of its prosecution by all sides, and of course the fact that it ended in failure from the American perspective.

RELATED: Wolfenstein: The New Order Vs New Colossus: Which Is The Better FPS Game?

All of these make it a harder subject to portray than something like World War 2. That said, some games have come out more recently that have successfully translated the conflict into a worthwhile experience. From Call of Duty to Rising Storm 2, the Vietnam War has proven to be a difficult but nonetheless interesting subject to explore within the medium of gaming.

Battlefield: Vietnam was probably the best Vietnam-themed FPS around when it was released for Microsoft Windows in 2004. It is the successor to the popular WW2 game, Battlefield: 1942, and the second release in what would become a very successful series of large-scale FPS games developed by Dice and published by Electronic Arts.

Like 1942, Vietnam features a number of period-accurate weapons and vehicles along with maps inspired by historically significant places and events such as the Ho Chi Minh Trail, Ia Drang Valley, the Battle of Hue City, and the Fall of Saigon. The game even features a historically authentic soundtrack that can be heard in-game.

Coming off of the successful WW2 multiplayer game, Red Orchestra 2, Tripwire Interactive would enlist the help of the modding community to develop and release a Pacific theater spin-off/expansion called Rising Storm in 2013. The success of this expansion prompted Tripwire and Antimatter Games to begin developing a Vietnam War-themed sequel entitled Rising Storm 2: Vietnam, which was released in 2017. Rising Storm 2, like its predecessors, is a large-scale hardcore multiplayer FPS game, but unlike them, it takes the asymmetric warfare elements of the first Rising Storm and turns them up to eleven, making a core element of gameplay.

RELATED: Great 2000s FPS Games That Have Been Forgotten

The game covers virtually the whole war and beyond (even including the French as a playable faction). It includes many historically significant locations as maps such as Saigon, Hue City, Hill 937 (Hamburger Hill), and features period-accurate weapons and gear for every faction. For these reasons, Rising Storm 2 is considered to be one of the most authentic Vietnam-themed FPS games ever released.

A remake of the original Battlefield: Vietnam, Battlefield Bad Company 2: Vietnam is an expansion pack that re-imagines the original game into a smaller yet chaotic and claustrophobic (by Battlefield Standards) experience. The game also adds a significant layer of grit to everything that neither the original game nor Bad Company 2 has. Guns and vehicles are dirty and beat up, environments are twisted and uprooted by war, and the player models are all ragged. The game is brimming with an atmosphere in a way that even more modern Vietnam War games are missing for one reason or another.

The game is not a total remake of the original, however. It only features one remade map from the original (Operation Hastings) and is missing quite a few weapons and vehicles. That said, the game was reviewed very well upon release, with some saying it was even more fun to play than the main game, though others made sure to note how different the experiences are from each other.

Amongst the sea of WW2 games coming out in the late 90s and early 2000s, Vietcong was released in 2003 and was a breath of fresh air for many. Though the game wasn’t very technically impressive at the time and is certainly even more dated these days, the game was nonetheless very creative at the time, offering a unique flavor of squad-type gameplay with a diverse and challenging set of missions set in the Vietnamese jungle circa 1967.

The game features both singleplayer and multiplayer modes. The former consists of both a story campaign and Quick Fights, a mode in which the player fights against AI enemies with no real objective on a map of their choosing. Multiplayer features the standard array of game modes, such as Team and Free for All Deathmatch, Capture the Flag, and more. The game supported a total of 64 players before the server host, GameSpy Arcade, shut down.

Perhaps it’s cheating to consider Black Ops a “Vietnam-themed” game, but there’s no denying the part the war plays in the game’s story. Of the fifteen campaign missions, five of them take place in Vietnam circa 1968, with two of those taking place during the Tet Offensive. In addition, several multiplayer maps are set in Vietnam: Cracked, Hanoi, and Jungle. The game also makes several references to famous Vietnam War films such as Apocalypse Now, Platoon, and The Deer Hunter.

The Vietnam segments of the campaign are some of the most action-packed and intense sequences in the whole game. Whole missions are devoted to a variety of combat scenarios ranging from wet and dirty jungle fighting to claustrophobic urban meat grinders. Of all the modern games to feature the Vietnam War in some capacity, Call of Duty: Black Ops is undoubtedly one of the most sensational.

MORE: Call of Duty: Things People Forgot About the Franchise