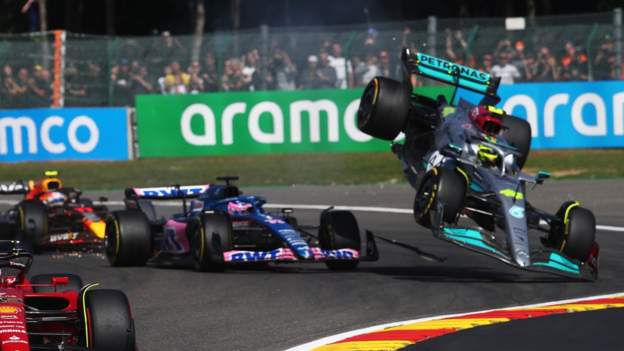 Lewis Hamilton said it was “nice to know how he feels about me” after being criticised by Fernando Alonso for a first-lap crash between the two.

Alonso called fellow driver Hamilton “an idiot” who “only knows how to drive and start in first [place]”.

The comments were heard on Alonso’s Alpine team radio after they collided during Sunday’s Belgian Grand Prix.

Hamilton, who accepted blame, said he would have spoken to Alonso about the incident “until I heard what he said”.

The Briton stated: “I know that’s how things feel in the heat of the moment, but it’s nice to know how he feels about me.”

The two were disputing second place at the time, and the incident caused Hamilton’s retirement after less than a lap and made Spaniard Alonso drop to fourth after he had moved up from third to second at the start.

His Mercedes went up on two wheels and Hamilton said he “nearly broke my back coming down”.

He added: “I remember just looking at the ground so I knew I was quite high. Definitely high. Grateful to be alive and in shape.”

Hamilton and Alonso have a long and sometimes bitter history, sharing a decade and a half of intense fights while also expressing the highest regards for each other’s ability on track.

The two were team-mates at McLaren in 2007, Hamilton’s debut season in F1, and finished tied on points after four wins each. Hamilton was classified ahead in the championship, one point behind winner Kimi Raikkonen of Ferrari, on results count-back.

The intensity of their battle almost destroyed McLaren, and Alonso fell out with the team, leaving at the end of the first season of a three-year contract.

But Hamilton has regularly described Alonso as the most talented and fastest driver he has ever raced against, and Alonso has also always been highly complimentary of his rival’s talents.

Relations between the two seemed to have become more cordial in recent years, but the Spa incident and its aftermath mark another low for the pair.

Asked about his radio message after the race, Alonso did not withdraw his criticism, which is questionable considering the number of times Hamilton has won from low down on the grid.

These include winning the 2018 German Grand Prix from 14th, and the 2021 Brazilian Grand Prix despite being sent to the back for the sprint race in which he finished fifth, and then starting the race 10th after a second penalty.

Alonso said: “Very disappointed. When I start well, on [the] first or second row, all these things happen and for sure I was frustrated in that moment. He accepted his mistake and is welcome.

“For me, it was a little bit of a mistake to close the door like this at Turn Five.

“I think he thought that I was not there anymore. It’s a mistake. It’s just the heat of the moment. You try to use the slipstream, brake late, turn in and sometimes you don’t measure the cars [right], where everyone is. But I don’t know, I normally take more care.”

Mercedes team principal Toto Wolff said: “[Lewis] just left him no room on the inside. Fernando was on the kerb already and there was not much more he could have done.

“Sorry for the incident from the team’s point of view, it rarely happens to Lewis.”

Alonso also criticised Ferrari, for whom he drove from 2010 to 2014 before leaving after negotiating an early release from his contract after he lost faith in their ability to deliver him a third title.

Ferrari pitted Charles Leclerc with two laps to go to try to earn the point for the fastest lap, but it put the Monegasque behind Alonso.

Leclerc, who had to repass Alonso on the final lap he was trying to set, beat the time posted by race winner and title rival Max Verstappen, failed to achieve it, and also received a penalty for speeding in the pit lane which demoted him to sixth – one place behind Alonso – in the final results.

Alonso, who lost the 2010 title after Ferrari made a major strategy mistake with him at the deciding race in Abu Dhabi, made reference to a series of errors by the team this year when he was asked after the race if he was surprised by their decision.