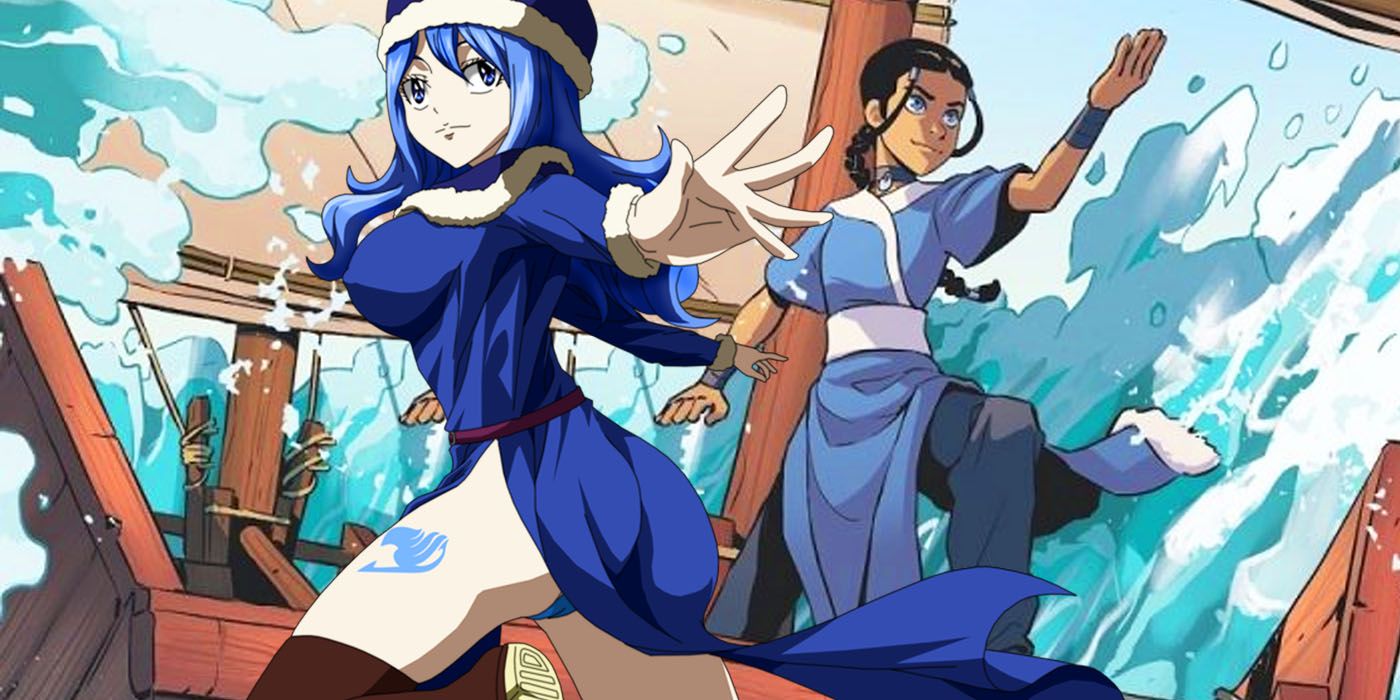 Typically calm and graceful beings, many popular anime from Demon Slayer to Avatar feature a specialist who controls and bends water. This water user is a level-headed individual with a natural affinity and love for the waves. While they may seem kind and reserved, these types can become a fearsome foe if angered.

Anime’s water-using warriors have a lot more in common than their special techniques. They are masters of their craft whose adaptability makes them useful in many areas.

RELATED: Anime’s Most Popular Ice Masters Have More in Common Than You Realize

Water specialists in anime tend to be as flexible and adaptable as the element they manipulate. Similar to water, this user can go with the flow during a battle and overcome any obstacle in their path. Though still young and inexperienced, Noelle Silva from Black Clover does her best to improve as a mage. While her magic can be uncontrollable, she’s found ways to overcome her challenges.

Juvia Locksar from Fairy Tail is a highly adaptable mage. Not only can she manipulate her water body, but she can work with any of her guild-mates and incorporate her magic to work well with others. For example, she achieved a unison raid combination attack with the ice master Gray Fullbuster. Juvia also went out of her way to protect Cana against a lightning attack, even though her water magic was at a disadvantage.

The water user is usually a calm and collected character who speaks few words. They may be timid around others or complete introverts but are typically well-mannered and polite. Tier Harribel from Bleach is one of anime’s level-headed water users. Observant and analytical, she carefully watches her targets before forming a planned attack. Thanks to this meticulousness, she can use her water abilities to their fullest potential.

Demon Slayer’s Water Hashira, Giyu Tomioka, is depicted as a loner who doesn’t interact much with his fellow Hashira. It has been a running joke in the series, where Shinobu teases him for not having friends and being disliked. Despite his introversion, Giyu is a strong and capable demon slayer. Not only did he achieve one of the highest ranked levels in the demon slayer corps, but he’s created his technique within water breathing — which few individuals have accomplished.

While they may appear level-headed on the outside, the water user can become the equivalent of a raging storm if they are angry. They are typically quiet and calculating until pushed to their breaking point, where they unleash the full extent of their powers. When angered, they can do immense damage. The Naruto franchise features several strong and skilled ninjas who specialize in water-style jutsu; these individuals play to their strengths and can create powerful techniques to defeat their foes.

Another powerful water specialist is Katara from Avatar: The Last Airbender. She is the most mature of the Gaang and shows compassion to those around her, but her kindness shouldn’t be taken for granted. Katara is arguably one of the strongest waterbenders, having mastered bloodbending. Since 80% of the human body consists of water, Katara can bend an individual to her will. She doesn’t anger easily, but when it comes to Aang and her friends, Katara will go to great lengths to protect them.

Water users in anime utilize their skills in various ways, being adaptable and flexible specialists who can use their skills to perform actions such as healing, attacking and defending. However, their generally relaxed nature shouldn’t be taken for granted; underneath is a warrior who can command storms.