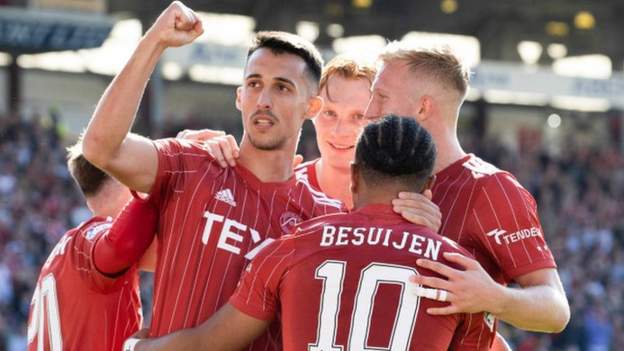 Aberdeen earned back-to-back wins for the first time since December by thumping 10-man Livingston in the Scottish Premiership.

It is the second week in a row David Martindale’s side have been reduced to 10 as they remain seventh in the table, while Jim Goodwin’s Aberdeen surge into third.

Livingston had by far the better of it in the first half, hassling and harrying the Aberdeen back-line. Stephane Omeonga and Joel Nouble in particular were causing all sorts of bother, but they could not make their dominance pay.

They then handed Aberdeen the lead, with a mistake that would leave Martindale furious going into the break. Shamal George played a slack goal-kick to Fitzwater, who could only wrestle Besuijen to the deck when he had the ball stolen from him and was ordered off.

Miovski scored from the spot, as he did against St Mirren, to give Aberdeen a slightly undeserved lead.

Livi brought on Phillip Cancar at the break in a bid to shore up at the back, but the move did anything but with Aberdeen scoring three in five minutes.

McCrorie got the second, slicing the ball into the top corner from the edge of the area after Livingston failed to clear properly. It was then Besuijen’s turn, this time from the spot, after Cancar fouled Luis Lopes.

A minute later, Miovski had his second. Jonny Hayes threaded the ball through the Livi back-line and one-on-one, the Aberdeen man slotted across George to get his second.

Duncan then got in on the act late on to score his first Aberdeen goal, but it was not the one he would have dreamed of. Crossing from the right, his delivery evaded everyone and bounced in off the back post.

Man of the Match – Bojan Miovski

Aberdeen finished the month how they started it, by making the most of an opposition red card at Pittodrie and slicing their visitors apart.

Just as they did to St Mirren, Jim Goodwin’s side scored at will and looked mighty impressive in doing so.

It is the first time they have scored five goals in the league since December 2018, when they routed Dundee 5-1 at home, and only Rangers have scored more league goals this season.

As for Livingston, it is a lesson in concentration. Had Jack Fitzwater kept his cool, this game could have had a much different outcome.

One can only imagine David Martindale’s reaction at half-time after 45 minutes in which side looked far more likely to score.

Aberdeen manager Jim Goodwin: “I’m delighted with the result and the performance. It wasn’t as straightforward and simple as people might think when they look at the result. There wasn’t a great deal between the teams at eleven-v-eleven. The sending off does have an impact on how the game pans out.

“I have to give my players a lot of credit because we were in a similar situation against St Mirren a couple of weeks ago. It’s often very difficult to break down ten men. Livingston are a good team and I don’t think they get enough credit at times.

Livingston boss David Martindale: “For 35 minutes, with eleven men, we were by far the better team. We created two very good chances and limited Aberdeen to corners into our box.

“I shouldn’t be stood here talking about getting beat 5-0. It’s not acceptable. It’s my responsibility. I made the changes. I’ve got to be big enough and ugly enough to take it on the chin.

“I owe the fans an apology. Maybe my changes at 3-0 down never helped the team.”

Aberdeen visit Annan Athletic on Tuesday night in the last 16 of the League Cup, with Livingston hosting Dundee United in the same competition (19:45 BST).

Player of the match