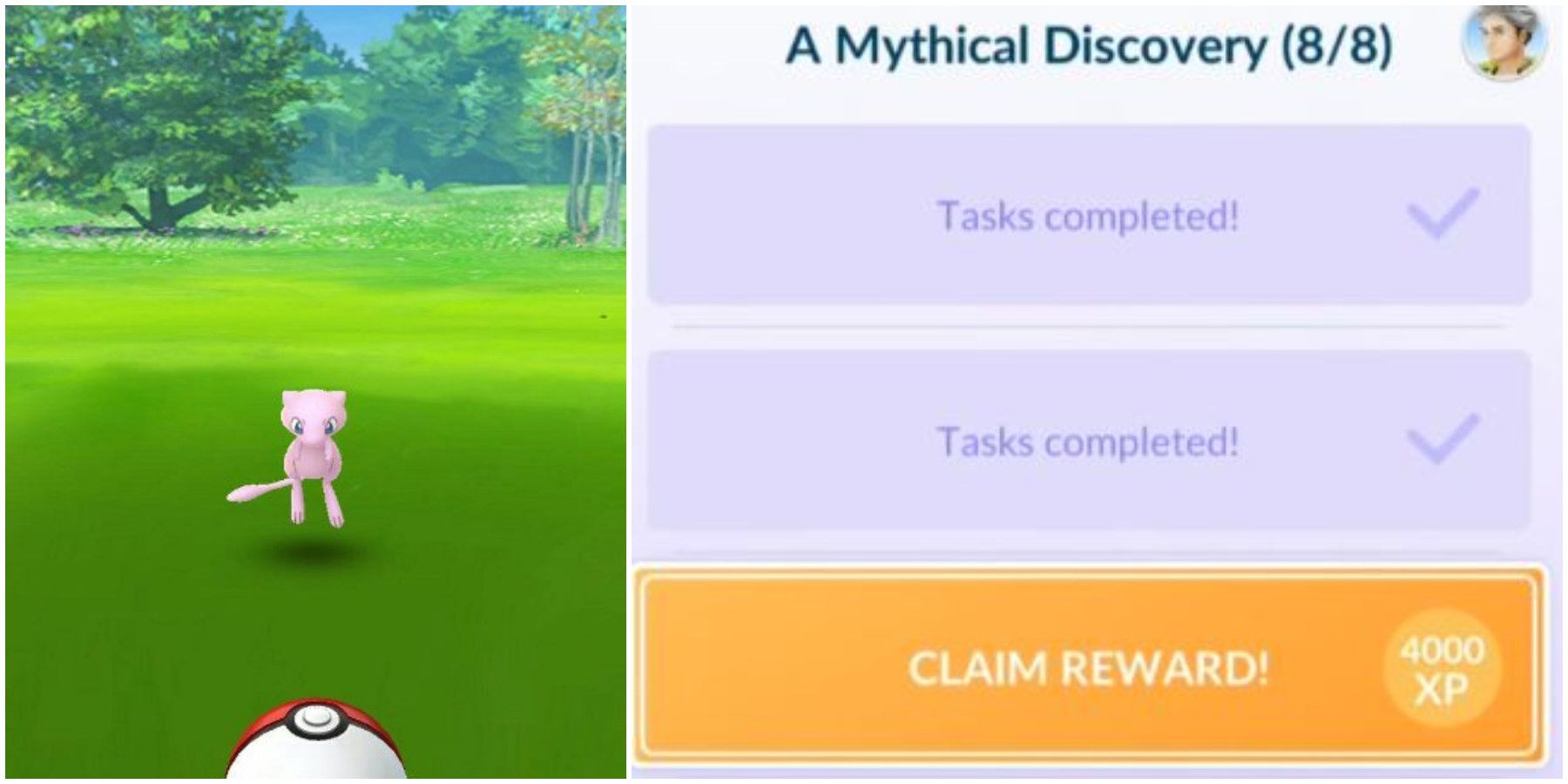 What started with one region and 151 Pokemon quickly expanded into over 900 Pokemon across eight generations. Each generation has brought a unique Pokemon of all types, from the terrifying Ghost-type Pokemon to beautiful Legendary and Mystic Pokemon. But, even after hundreds of Pokemon, one Legendary Pokemon remains loved by original Poke fans, the elusive Mew.

Mew is among the most powerful Legendaries in the Pokemon franchise, so hardcore Pokemon trainers like to include Mew in their team lineups. And even in Pokemon GO, players can add Mew to their team lineup to face off other Pokemon in the GO Battle League. But, the only way players can register Mew into their Pokedex is by completing A Mystical Discovery Special Research quest.

As players can imagine, the first part of A Mystical Discovery special research is relatively easy to complete. Players will need to spin five Pokestops/Gyms (it can be the same Pokestop/Gym). And while players are spinning Pokestops/Gyms, they should also catch ten Pokemon to complete the following objective.

Once players have caught all ten Pokemon, they’ll need to transfer them (or any other Pokemon they don’t want). Players can do this by pressing down on a Pokemon and selecting transfer. Transferring a Pokemon will also give the player a Candy of that particular Pokemon which is a slow but steady way of farming Candies.

For the second part of this special research quest, players must earn two candies with a Buddy Pokemon while walking. Players are free to choose any Pokemon, but placing Magikarp as the Buddy Pokemon is recommended as players will need to evolve it later in this special research. Trainers should make 10 Great Throws to complete the second objective, which shouldn’t be too difficult.

As for the final objective, players will need to hatch three eggs. Pokemon GO fans can place 2km eggs in the Incubator they received as a reward from the previous step and the permanent one to complete this objective much faster. The final rewards for this step are x2000 Stardust, x3 Incense, and x20 Great Balls.

The first objective of Part 3 of A Mystical Discovery special research is to reach Trainer Level 15 (if a player is already at or passed this level, it will automatically be completed). Players that haven’t reached that Trainer Level need 15,000 EXP, which can be done fairly quickly by evolving Pokemon while using a Lucky Egg.

Players will also need to battle (and win) two Raids and battle a Gym two times. As long as the Pokemon Defenders aren’t Drifblim or Dragonite, players should be able to complete this objective without breaking a sweat. The rewards for completing this part are x1 Charged TM, x1 Fast TM, and x2 Star Pieces.

Players will need to obtain the Silver Kanto Medal for the following part. That means players must register 50 Pokemon from the Kanto region (if they already have the Silver Kanto Medal, then the objective will be automatically completed). Fortunately, Pokemon from the Kanto region are quite common in all parts of the world, so obtaining this medal should be easy.

For the second objective, players must evolve 20 Pokemon (they can be the same ones). The best ones to evolve are common Pokemon like Pidgey, Rattata, or Zubat since there’s always an abundance of them. Finally, players should earn five Candies while walking with their Buddy Pokemon (hopefully Magikarp). The rewards for this part are x4,000 Stardust, x3 Lure Modules, and x20 Great Balls.

Now comes the time for the most challenging objective of A Mystical Discovery special research, catching a Ditto in the wild. Unfortunately, there’s no proven method to attract Dittos, and since they transform into other Pokemon, it’s impossible to locate one on the Pokemon Radar. So, the only recommendation other veteran players have for this objective is to catch every single Pokemon a player encounters.

Fortunately, the second objective is easy to complete (especially during the Halloween season) as there are more Ghost-type Pokemon in the wild. Players that want to “cheese” making Great Throw can do so by winning a Legendary Raid since these Pokemon have larger hit markers than normal Pokemon. Players that complete this part will receive x1 Premium Raid Pass, x1 Lucky Egg, and x15 Revives.

By now, players should be well acquainted with Raids, so winning ten Raids should be a breeze, especially with a group of friends. Players will need to evolve a Magikarp to complete the second objective, which requires 400 Magikarp Candies. Hopefully, players have been using Magikarp as their Buddy Pokemon and racking up Candies while walking with the Adventure Sync enabled.

But, players will have plenty of time to evolve their Margikarp since they’ll need to reach Trainer Level 25 to move on to the 7th Part of this special research quest. Once completed, players will receive x6,000 Stardust, x5 Rare Candies, and x3 Incense.

The first two objectives of Part 7 of this special research quest should be manageable since players will only need to use 50 Berries to catch Pokemon and make one Excellent Curveball Throw. As for the third objective, players will need to earn the Gold Kanto Medal (register 100 Pokemon from the Kanto Region), which won’t be an easy task.

Fortunately, players are already halfway to a hundred since the Silver Kanto Medal needed 50. There’s no method of spawning Kanto Pokemon, except for specific Pokemon GO events. Upon completion, players will receive x20 Ultra Balls, x8,000 Stardust, and the mystical Mew encounter.

Players won’t have to do anything for the final step of A Mystical Discovery since all three objectives are automatically completed. Players will receive x10,000 Stardust, x1 Super Incubator, and x20 Mew Candies as final rewards for this special research.

Pokemon GO is available now for iOS and Android.