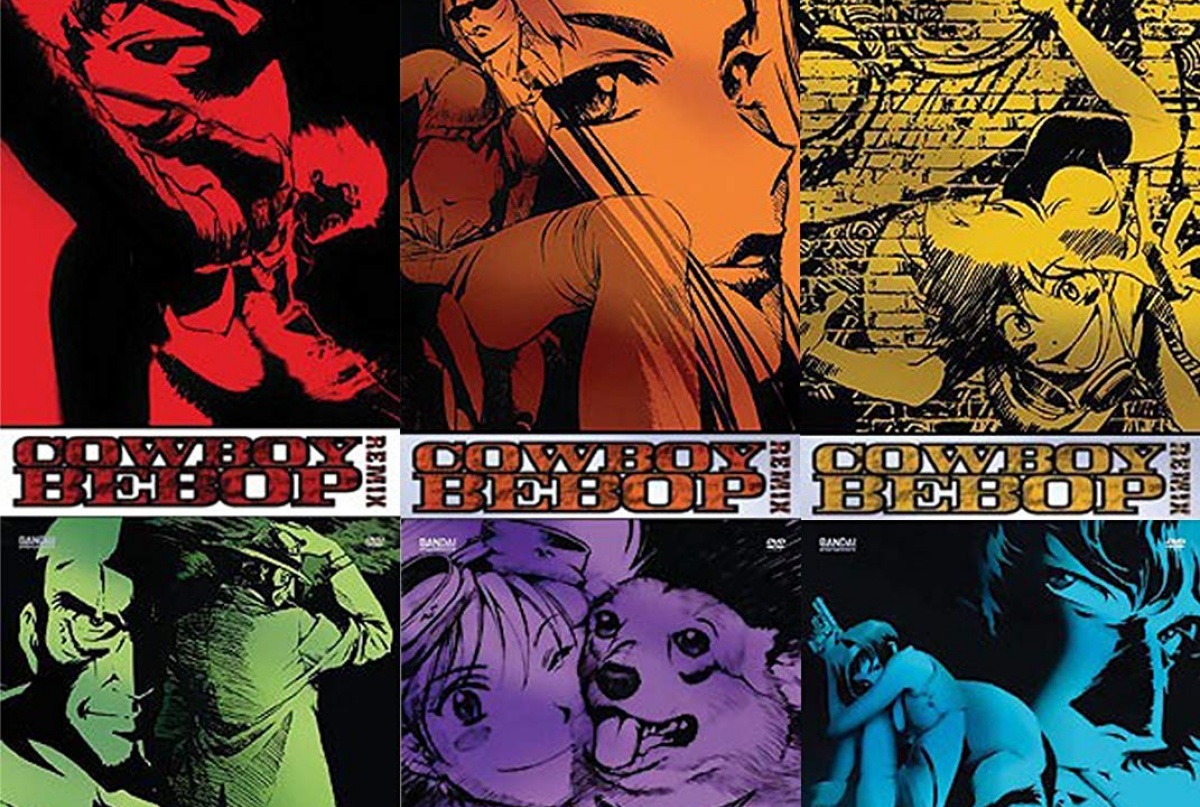 In my humble-and-usually-wrong opinion, we don’t praise anime soundtracks enough. We praise live-action soundtracks like Stranger Things or Western animation soundtracks like The Lion King. But when it comes to anime, we usually only talk about things that don’t make bangers like story and animation and voice acting. But when I’m in the car on the way to the club, I don’t want to put on a recording of the cast of Kill La Kill screaming at each other (though that would get me pretty hype), I want to listen to music that gets me ready to throw ass. So this is it, gang. According to my humble-and-usually-wrong opinion, these soundtracks are some of the best that anime has to offer.

Well, this is just a fucking no-brainer. It’s Cowboy Bebop. Music is a character in this series. Without the music, this series wouldn’t have achieved the levels of critical acclaim that it enjoys. It’s an essential component of what Cowboy Bebop does better than every other anime: style. The series is cool, contemplative, and fun, and the music is the number one reason why. First off, the main theme “Tank!” makes me want to throw ass in a jazzy way. It’s a triumph of modern jazz composition. After the jazz greats had their days in the sun, jazz took something of a downturn and became a style of music that was often meandering, esoteric, and downright pretentious. Seatbelts, the composers of “Tank!” said, “fuck that,” and instead made a fun, frenetic, and infectiously catchy jazz tune that Bebop viewers will be humming for decades. The series also has beautiful, sweeping, and tear-jerking works like “Space Lion,” a drum and vocal piece that closes out the ending of Season 1. Cowboy Bebop’s soundtrack is a triumph of composition and is (arguably) the finest anime soundtrack of all time.

Samurai Champloo‘s soundtrack features work from one of the pioneers of the Lo-Fi hip hop genre, a Japanese producer known as Nujabes. Born as Jun Seba, Nujabes is known as one of the godfathers of lo-fi hop hop, alongside American producer J Dilla. Through clever uses of sampling, both of these men helped shape a genre that flew in the face of traditional songwriting, and prioritized mood and atmosphere over lyrics and song structure. Much like its predecessor, Cowboy Beebop, the music of Champloo allows the series to maintain a contemplative, ephemeral atmosphere that is beautifully juxtaposed with the stark violence of many of its plotlines. The soundtrack often plays against its easy-going nature in key moments to great dramatic effect. Take “The Million Way of Drum” sequence from “Misguided Miscreants Part 2.” Just when the antagonist, of that particular episode, thinks he’s safe after screwing over favorite anti-hero Mugen, the Mugen shows—to the soundtrack of a whirlwind of drums—to remind the guy why he shouldn’t have trifled with him. At its best, Samurai Champloo‘s soundtrack is moody, dreamy, and the highest of praise: chill af.

Confession: I don’t remember too much of Neon Genesis Evangelion‘s actual in-episode soundtrack, but that doesn’t matter, because the intro song “Cruel Angel’s Thesis” by Yoko Takahashi is perhaps the greatest anime intro music of all time. It is ABBA-level catchy. A baroque pop earworm complete with gorgeous vocals, stunning melodies, and perhaps the most banging horn section of any anime song ever. It’s a triumph of songwriting, and its happy-go-lucky melody holds a sinister undercurrent beneath it. On the surface, the song sounds joyful, but something in the composition leaves me on edge every time I hear it. It is the sound of dancing wildly on the edge of an abyss. The title alone is enough to send chills down the spine. “Cruel Angel’s Thesis” is the ultimate theory of a malevolent divine being. It is the perfect piece of music for a series that is reconciling with the meaning of being human in the face of god-like otherworldly power.

Another confession: I can’t get into Naruto. Don’t get me wrong, I think it’s awesome. The world-building is phenomenal. The characters are deep and nuanced. The million and one ninja techniques are each creative as hell. But there’s just too much filler. There’s too much of it. I can’t keep up. I’ve tried so many times to watch the show but I just get burned out. But one aspect of this series that never fails to disappoint me is the music. It kicks ass. When Asian Kung-Fu Generation’s “Haruka Natada” plays over the early series opening sequence, I get chills. When Naruto is about to get the upper hand in battle and his theme music starts playing, I get chills. When Sasuke says the phrase, “demon wind shuriken: windmill of shadows!,” in his fight with Zabuza and that piano music starts playing. I get chills. The music of Naruto is nothing short of phenomenal. It’s bold, badass, and creative as hell. Writing about it makes me want to consult a filler-episode guide and give the series another go. And I just might.

The music of Attack On Titan is often like the show itself: bombastic, terrifying, and melodramatic in the best way possible. The main theme from Season One has all the gravitas of John William’s famous “Duel of The Fates” from Star Wars. Each piece of music from this show fills the listener with an enormous sense of dread. And since it’s Attack On Titan, that dread is never unfounded. Even the “peaceful” music at the ending credits is often creepy as hell. Just check out the ending credits from Season 2 and you’ll see what I mean. The series also experiments with genre in a variety of creative ways, sometimes within the confines of a single track. It’s not unusual for an AoT song to go from orchestral and operatic to alt-rock and heavy metal in the hair’s breadth of time between a verse and a prechorus. The score is not without its beautiful moments as well, and often features sweeping string arrangements undercut with delicate acoustic guitar. In a show that can turn from triumphant to terrifying in the span of a second, Attack On Titan screams for a score to reflect that juxtaposition sonically. And by God, I think they succeeded. Now, excuse me while I go have nightmares.

Written almost entirely by the Japanese rock band The Pillows, FLCL has a soundtrack that feels delightfully “uncomposed.” What I mean by this is that they don’t reek of classical arrangements or a music school education. They feel down to Earth, gritty, and raw. Like they were written by four kids in a garage (and perhaps they were?) The soundtrack of FLCL captures the angst of youth in the same way that the garage/indie rock opus that was the Scott Pilgrim vs. The World soundtrack does. It’s a show about being young, dealing with crushes, and growing up. It also deals with a Rickenbacker bass-playing alien girl, sent from an intergalactic police force to fight off an extraterrestrial robot invasion. But indie rock has been dealing with themes like that since the early 00s! Have a listen to The Flaming Lips album Yoshito Battles The Pink Robots and you’ll hear what I mean.

Like Cruel Angel’s Thesis before it, Kill La Kill is in possession of a gem of a banger, I’m talking of course about “Don’t Lose Your Way.” It’s an absolute alt-rock hit. And it plays at only the most badass moments of Kill La Kill (usually when Ryuku is taking back the upper hand in battle with a particularly tough foe). This happens more often than you’d think actually, and while any lesser song would certainly lose its impact—due to the law of diminishing returns (i.e. if you repeat it too much it gets old)—”Don’t Lose Your Way” never falls victim to this. I really just don’t get sick of it. It’s so soul-stirring. So Young Girl vs. The World. So hopeful and powerful and triumphant. It’s just a great fucking song. And the rest of the soundtrack is no slouch either. It was composed by Hiroyuki Sawano, who also did the music for Attack On Titan and a number of other popular anime titles. Like Attack On Titan, the soundtrack is a sonic mutt of genre, borrowing from electronica, orchestral, and rock and roll. It really just makes you want to pick up a pair of scissors and fight the person who killed your father. Just don’t run while you do it, for safety’s sake.

This slightly obscure anime about a traveling doctor, who cures people of complications caused by spirits, has an absolutely breathtaking soundtrack. The main theme is a gorgeous acoustic guitar ballad with the structure and complexity of an Elliott Smith song. While many anime soundtracks on this list are a masterclass in drama and bombast, this soundtrack is particularly ingenious for its use of subtlety. Watching an episode of Mushishi feels in many ways like a meditation. The pace of the episodes is slow and easy, like watching a flower grow. Don’t get me wrong, there are life and death situations in nearly every episode, but one can’t help but feel a sense of quiet and contemplative calm when watching the series. The soundtrack only adds to the blood-pressure-lowering effect of the episodes—with soothing chimes, piping flutes, and fragile acoustic guitars. It’s a series to unwind to after a long, hard day. Maybe watch it to decompress after stabbing your father’s killer to death with scissors (that I hope you weren’t running with).

—The Mary Sue has a strict comment policy that forbids, but is not limited to, personal insults toward anyone, hate speech, and trolling.—

Have a tip we should know? [email protected]