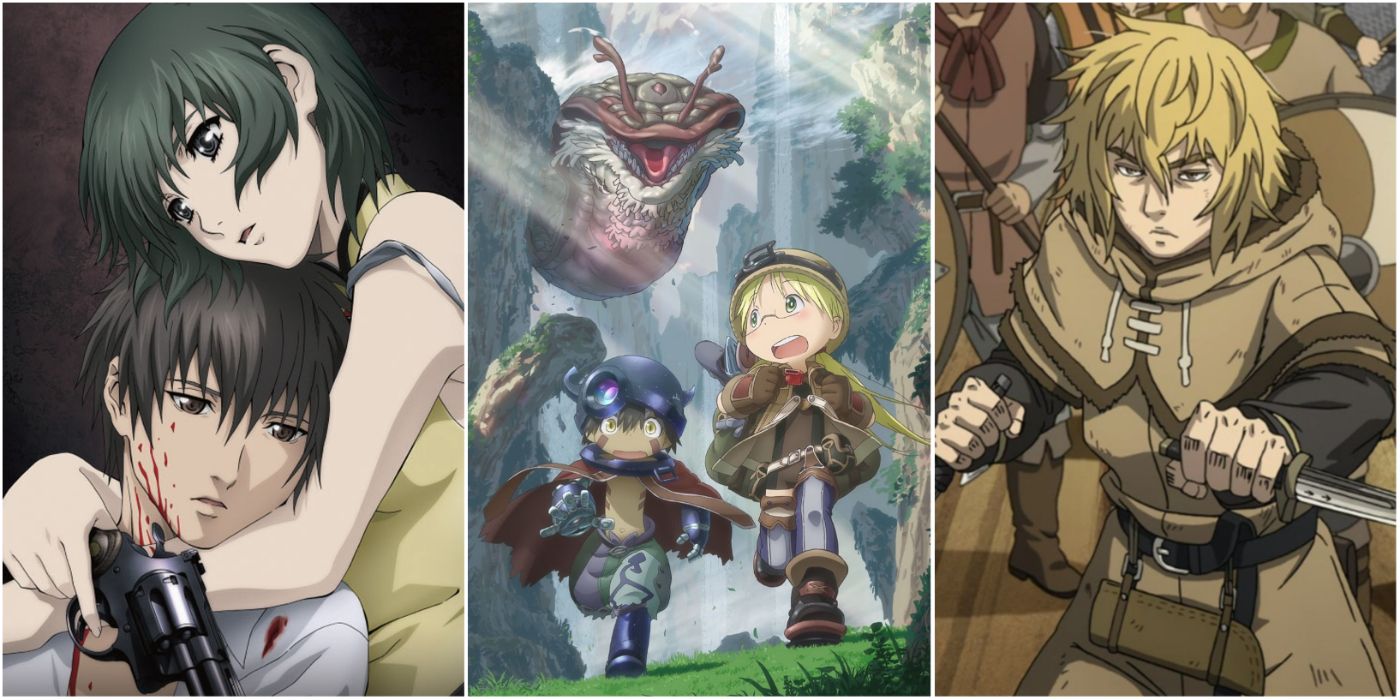 Ranging from comedic love stories to brutal battles, there’s something for everyone in the seinen genre. While there are popular seinen that stand at the forefront of the genre, there are some that fans barely give the opportunity because they don’t appear interesting at first glance. However, some now-popular and underrated seinen that were given a chance turned out to be way better than expected.

Fans sometimes believe there’s a lack of originality with certain stories, and it can be difficult to take interest in seinen that don’t seem original. Thankfully, many seinen anime adaptations continue to impress and leave little room for disappointment.

10 Made In Abyss’ Cutesy Aesthetic Is Quite Misleading

The aesthetic and protagonists in Made in Abyss look so innocently beautiful that fans didn’t expect to find what actually lurked within. When Riko and Reg set out to explore the Abyss, things get serious.

There are some unexpectedly creepy events that take place, which quickly make it apparent that Made in Abyss won’t be a cute story about a couple of curious kids. The bizarre and disturbing events that take place in the Abyss leave fans in suspense as Riko and Reg struggle to stay alive to find Riko’s mother. It’s an adventure that truly gave fans more than they could’ve ever imagined.

Vinland Saga kept fans on a tight leash seeing as how Thorfinn had the chance to kill Askeladd many times. Thorfinn, however, wanted to challenge Askeladd and defeat him honorably, just like his father would’ve.

8 Kaguya-Sama: Love Is War’s Premise Is Funnier Than It Sounds

Kaguya-sama: Love is War saves fans from a drawn-out arc where two love interests aren’t sure if they have feelings for each other. Miyuki and Kaguya are already aware of their feelings, but they refuse to be the first to let the other know.

It’s usually annoying when two characters can’t confess their love for one another, but Miyuki and Kaguya’s contest is actually amusing. Feeling that it’d be low of them to confess, because of their high statuses, causes them to refuse to be the first to falter. For a premise that sounds immature, it’s funnier than it sounds and keeps fans entertained.

Psycho-Pass is anything but typical when it comes to crime-fighting anime. Makishima plotted the Sibyl System’s downfall, which actually wasn’t the worst idea. The crimes that took place seemed random at first, but it turned out they were all part of an elaborate plan by Makishima.

Once the pieces of the puzzle started coming together, fans couldn’t get enough and had to see how Tsunemori and Kogami would handle Makishima’s heinous scheme. Psycho-Pass is more than a simple crime thriller. There are many layers to each crime and each character that fans didn’t see coming.

6 Parasyte: The Maxim Is More Thought-Provoking Than It Seems

Parasyte: The Maxim poses the question of what it means to be human. Shinichi being able to cohabitate with his parasite, Migi, made all the difference as they embarked on a parasite-fighting journey together.

RELATED: 10 Anime Characters Who Are Smarter Than They Look

Rather than Shinichi living with a weird alien that can’t communicate, he and Migi actually form a bond and possess their own personalities and desires. Parasyte is more than an anime about grotesque creatures. Fans begin to see that parasites feel that they’re only doing what’s necessary to survive. It’s a psychological journey on which fans didn’t expect to embark.

Monster’s story sounds straightforward until fans realize the extent of Tenma’s decisions. No one would have thought Monster would be the rollercoaster ride it turned out to be.

From Tenma’s situation at the hospital to his personal life, fans can’t help but feel sympathetic toward the man whose success was suddenly pulled from under his feet. Tenma’s journey to make right by his choices was interesting for fans as more became revealed. Monster is a gripping mystery that is more than what meets the eye.

4 Phantom: Requiem For The Phantom Is An Amazing Psychological Experience

Phantom: Requiem for the Phantom’s story begins with the kidnapping of an innocent young man. He’s lost his memories, but one thing he knows is he’s being turned into an assassin for an organization known as Inferno.

Phantom explores the psychological aspects of life and humanity. Fans can’t help but feel for both assassin protagonists, Ein and Zwei, as they’ve lost themselves and become devoid of human emotion. Inferno trains its assassins to feel and think of nothing except the intent to kill. Phantom is packed with action and it is a greatly underrated psychological thriller.

For a seinen in the comedy genre, Haven’t You Heard? I’m Sakamoto was a pleasant surprise. Instead of making Sakamoto the type of character who’s typically funny, he’s hilarious without even trying.

RELATED: 10 Anime Characters Who Fight With A Smile

After being introduced to Sakamoto when he thwarted a prank by a group of bullies, fans immediately grew curious as to what else he was capable of. As Haven’t You Heard? I’m Sakamoto continued, it became a fun experience to see and think about how he’d get out of each new debacle. It’s a one-of-a-kind comedy that’s pretty impressive.

2 Hellsing Is One Of The Best Vampire Stories Ever Told

Hiring vampires to kill other vampires and ghouls is the way things go in Hellsing. Never faltering or breaking a sweat, Alucard is the baddest vampire hunter around. At moments when fans thought he was in trouble, Alucard always had another trick up his sleeve.

Adding another vampire to the organization, Seras, who struggled with coming to terms with being nonhuman added another layer to this already interesting story. As if that wasn’t enough, it turned out some ghouls terrorizing the streets were being artificially created. There’s much to unpack in a story that seemed like a typical vampire tale.

1 One-Punch Man Is The Perfect Superhero Anime For Adults

If fans expected One-Punch Man to be about a man who encapsulates every aspect of a common hero, they must’ve been shocked when Saitama turned out to be an average guy who just happens to be overpowered. Saitama is fairly easygoing and very indifferent to the crime that floods the streets.

Since Saitama’s so strong, he really has nothing to fear. His unimpressed facial expressions are comedic gold as the most outrageous villains try to overtake him. One-Punch Man gives fans a different experience when it comes to superheroes, and it’s better than anyone would’ve imagined.

NEXT: The 10 Biggest Mistakes In Seinen Anime, Ranked