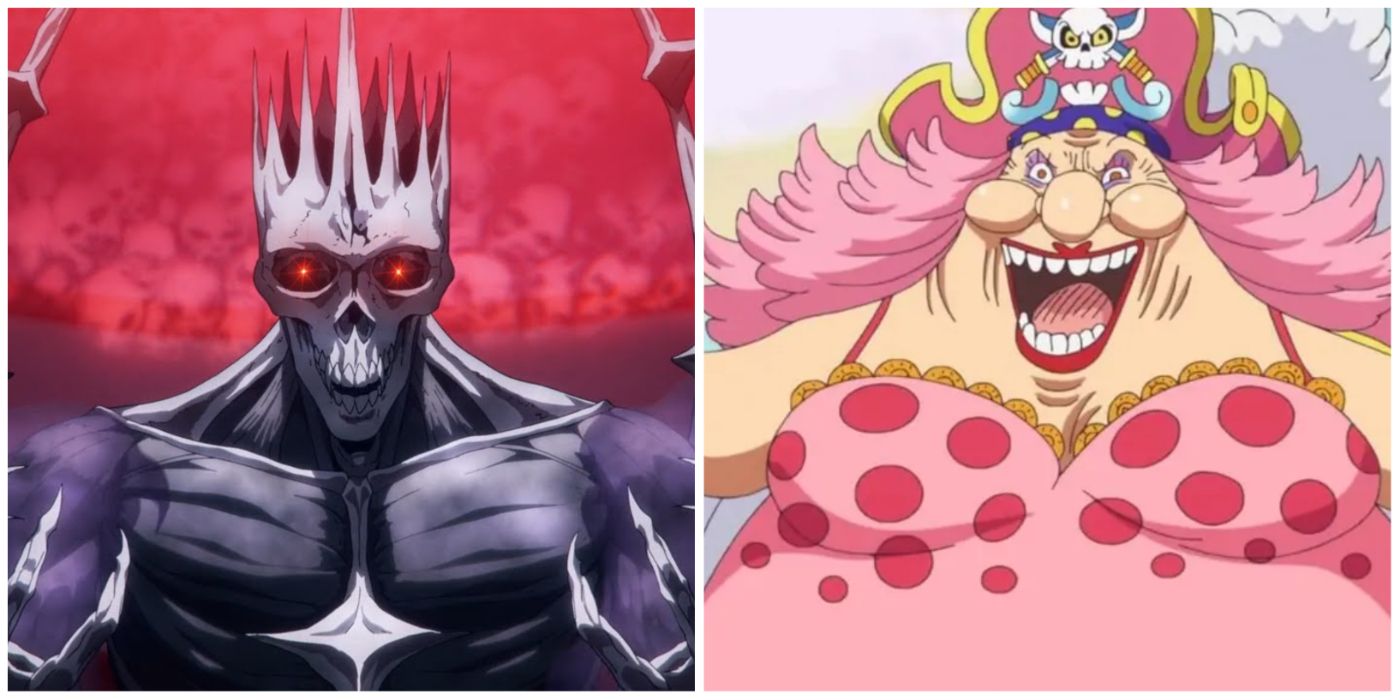 Typically, elders are viewed as founts of wisdom to guide and nurture the next generation. In many stories, they serve roles as mentors and political figures, rather than main protagonists or antagonists.

RELATED: 10 Anime Characters Who Would Rather Be Loved Than Feared

However, there are a number of elders in anime so powerful that people throughout their entire universe fear and respect them. Whether able to unleash primordial forces or simply not losing strength with age, these characters have seldom slowed down over their long lives. By identifying them, it becomes easier to appreciate how they are still relevant and what makes them so formidable in battle.

10 Big Mom Is An Emperor Of The Sea (One Piece)

With over forty children, One Piece‘s Big Mom ranks among the series’ oldest characters. A prodigy since a young age, she relies on her natural strength in order to remain a relevant threat well into her senior years. Big Mom’s lethality is understandable.

As a former member of the Rocks Pirates and the current user of the Soul-Soul Fruit, her combination of experience and power make her a force of nature. Nonetheless, Big Mom usually leaves strategizing to her children and is a much better fighter than tactician.

9 The Demon King Is An Ancient Deity (Seven Deadly Sins)

The main antagonist of the Seven Deadly Sins, the Demon King is deadly because he is ageless. Presumably as old as the cosmos themselves, time passes much quicker in the underworld than it does in Britannia.

The Demon King has used his immortal physiology to his advantage. It allows him to be patient with his schemes, especially given his awareness of the forces of Chaos and Supreme Deity. His plan to take over Meliodas’ body was also 3,000 years long.

8 Jiraiya Was A Formidable Sannin (Naruto)

Although an excellent ally to Naruto‘s heroes, Jiraiya was a formidable enemy to those who would do it harm. A member of the legendary Sannin and a decorated war veteran, his versatile arsenal of jutsu even sent two Akatsuki members into full retreat from the village.

What makes Jiraiya so terrifying is his ability to trap enemies in a toad’s stomach using genjutsu. It allowed him to disable some of Pain’s paths, nearly turning the battle against him despite entering it with minimal knowledge of his opponent.

Out of all Bleach‘s shinigami, Aizen feared Yamamoto the most. He realized that in spite of the man’s age, his ability to conjure fire at great quantities could pose a serious complication to the Espadas’ plans. Aizen was right to be afraid; few characters have the constitution to keep the diverse shinigami captains together.

Aizen was so determined to take Yamamoto out of the picture that he personally designed a minion in order to defeat him. Although largely successful to this end, Aizen still lost since he underestimated Ichigo and his ability to convert spiritual pressure into sheer physical force.

Formerly known as the dwarf in the flask, Father’s agelessness is due to his supernatural existence. Capable of making himself appear even younger than he is, there is no indication that his powers have waned over time in Fullmetal Alchemist.

Unfortunately for Amestris, almost all of Father’s children are as immortal as he is. This means that they can terrorize the city indefinitely when enacting their master’s plans. Bradley is the only exception, as he needed to grow older in order to maintain his disguise as a regular person.

Isaac Netero was one of the most powerful characters in Hunter X Hunter. Despite his age, he has honed his body to perfection over the years so that his ability to fight is almost perfectly maintained.

Netero’s primary ability, the Guanyin Bodhisattva, proved fast and deadly enough to repel Meruem hundreds of times. It was even the first thing that made the Chimera King feel pain, which illustrates how much Netero surpasses his colleagues in the Hunter’s Association.

4 Death Was A Malevolent Force Beyond Comprehension (Castlevania)

Castlevania‘s Death was an ancient being who lurked beyond the mortal plain. As his name suggests, he longs for human calamity and feasts off their demise. To this extent, he attempted to splice Dracula with his deceased so that the resulting aberration would lash out against the populace.

Over the centuries, Death has taken many human forms in order to see his ambitions through. Fortunately, he was cut down by Belmont before his plan could be fully enacted and cause unspeakable ruin.

Baki‘s Spec was one of the five escaped convicts, a coincidental group of fighters that happened to all seek defeat simultaneously. Although older than his colleagues, Spec was also significantly more vicious. He employed whatever underhanded tactics were necessary in order to win, which came in handy against the honorable and stalwart Hanayama.

For example, Spec stole high-caliber police explosives and stuffed them into his opponent’s mouth. While Hanayama miraculously survived the impact, it left his face permanently scarred and deformed. Spec was still ultimately defeated regardless of Hanayama’s injuries.

2 Whitebeard Was Feared By Marines Everywhere (One Piece)

As one of the last pirates from Roger’s day, Whitebeard was perceived more as a living legend than ordinary person. When Blackbeard gave Ace to the World Government, the marines knew that they were in for the fight of their lives. Certainly enough, Whitebeard’s armadas shook Marineford to its foundations.

The emperor effortlessly beat down characters previously presumed powerful like Akainu and Aokiji despite his preexisting sickness and old age. Should Whitebeard not have been holding back for Ace’s sake, he likely could have slaughtered all of his enemies on the spot.

1 All For One Is An Intergenerational Menace (My Hero Academia)

Known as the Symbol of Evil itself, My Hero Academia‘s All For One transcends age. He has stood against every single One For All user, slaughtering them consecutively until finally being delayed by All Might. Although All For One does not age, he is not immune to injury.

He lost most of his face in a previous fight with All Might, breaking his body so unrecognizably that he felt his retirement was inevitable. To this extent, he groomed Shigaraki in order to become his successor much like what All Might does with Midoriya.

NEXT: 7 Ways Kiba Is The Worst Konoha 11 Member In Naruto